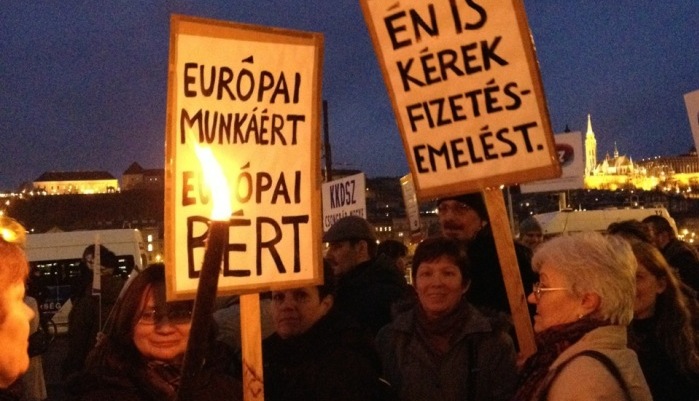 “European wages for European work”  “I want a raise too!”

“In the beginning God created the heavens and the earth. Now the earth was formless and empty, darkness was over the surface of the deep.  And God said, ‘Let there be light.'”

Around one thousand attended last night’s protest against the impoverishment of Hungarian culture and those employed in it. The demonstration, organized by the Public Culture and Public Collection Workers Trade Union (KKDSZ), saw protesters hold a torchlight procession from the Hungarian Academy of Sciences to the Ministry for Human Resources, where they delivered a petition.  A number of public persons showed up, including Zoltán Vajda, organizer of the “Sixty thousand for private pensions demonstration”, and former SZDSZ politician Imre Mécs.

As with other recent demonstrations, the back of a light commercial vehicle served as the stage.  KKDSZ countrywide presidium member Balázs Mészáros welcomed the participants before criticizing previous demonstrations for “being preoccupied with the past and the present”, a mistake he promised not to repeat.  “KKDSZ would like to mobilize its members towards a very simple and positive goal,” Mészáros said. He reached into his pocket and produced a book he claimed was the basis for European culture, from which he read an extract:

“In the beginning God created the heavens and the earth. Now the earth was formless and empty, darkness was over the surface of the deep.  And God said, ‘Let there be light.'”

Mészáros told the crowd that Hungary was getting darker by the minute.  For this reason “let there be light!” he said, repeating it twice over, louder each time.

“On January 22, 1823 Ferenc Kölcsey wrote the words to Hungary’s national anthem,” said Mészaros.  “We mark this date with the Hungarian Day of Culture.  Those of us who work for it are gathered here two days earlier because we celebrate this day in our work.  But is it really a celebration?” he asked.  “The celebration of a forgotten work by a forgotten author?”  He called a “bitter state of affairs” the fact that Hungary’s national anthem was song by increasingly fewer people at public events.  “This is unworthy and we won’t allow it.”

Next to take the stage was actress Júlia Zsolnay, who recited Kölcsey’s hymn, which echoed off the facade of the Academy’s building and filled the whole square.

Afterwards PSI/EPSU Secretary for Central Europe and Western Balkans Jozsef Krejbych took the stage to express solidarity with the demonstrators on behalf of the European Federation of Public Service Unions (EPSU).  He pointed out that they had not received a wage increase for 10 years and were paid “just enough to survive.”  He concluded his remarks by saying that “the Hungarian government must recognize that culture is the fundamental  human value in every country.  But until that happens, be strong!”

KKDSZ vice-president Csabs Csóti was the last one to take the stage in front of the Hungarian Academy of Sciences building.  “Long live those who light a torch for Hungarian culture in Budapest and numerous cities in the countryside,” he told the crowd.  He said those working in culture are not respected either ethically or materially.  “We are the nation’s day laborers, even though without culture not only could people not live happily but the nation would not be possible,” said Csóti. 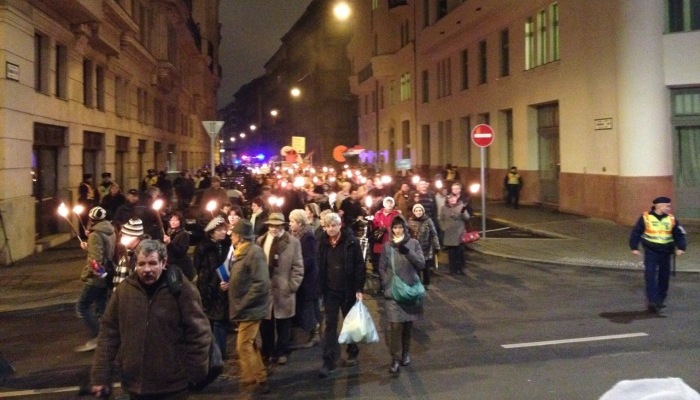 At this point KKSDSZ vice-president, museum specialist Katalin Papp asked the crowd whether the government understood what culture meant, even as it spends hundreds of billions on conspicuous projects.  “The government is moving to the Castle District, thereby endangering its collections, and the unparalleled collection of the National Gallery, as well as the national library, which they want to move to the former swamp of the city park at enormous cost,” Papp said. “Meanwhile the smaller countryside institutions are struggling for survival.” Papper asked the crowd whether professionalism was important.  Jeers greeted her mention of the name of culture undersecretary L. Simon László.  The government will not do what the profession wishes, and was not even trying to maintain an appearance of doing so, she said.   Meanwhile the workers were afraid of losing their jobs. “Culture makes the man,” Papp said. “Lack of culture is inhumanity.”

As the crowd filed along behind the small truck chanting “let there be light!”, Mészáros, microphone in hand, pointed out that 20th-century Hungarian educational pioneer Kuno Klebersberg sat in the ministry at a time when the country had collapsed after Trianon and poverty reigned, but that he still knew what the task at hand was.  “He established many thousands of public schools and universities because he believed it would give the Hungarian people an advantage over its neighbors if they were more educated,” Mészáros told the crowd.

The points of the petition:

The crowd enthusiastically signaled its approval.

After delivering the petition to a ministry representative, the small truck parked in the middle of Szalay street only a few meters from the corner of the Kossuth square.  There László Trencsényi, university teacher and founder of the Network for Curricular Freedom, took the stage.  However, before he start speaking the crowd started chanting “Orbán scram, and take all of your buddies with you!”

Once the crowd had quieted down, Trencsényi told them they had taken “an Azeri axe to the system of cultural centers and gutted them”.   His speech then turned to literature, quoting Babits and Radnóti, and reminding the crowd of the “enrichment of the politicians”, the “educational system designed to produce simple and disposable people”, and the “corrupted schools.”  He closed his speech with a question:  “How long will the illiberal democracy permit itself the appearance of allowing us to take to the streets to say what we want and express our opinions?”

The next speaker was Mari award-winning director Árpád Schilling, who told the crowd there is no point to negotiations because “this elite has no need for negotiations,” and the government does not want to negotiate with anyone.  “It turns out that there is no other solution than to demonstrate, which is good to see.  At the same time it is also apparent that the protesters are pulling apart in different directions and the organizers are criticizing one another.  This is a luxury we cannot afford,” said Schilling. “In addition to solidarity it is necessary to have plans in the event Orbán actually leaves.”  He concluded: “(w)e need to work on what kind of world we would like.”

He was followed by Balázs Gulyás, organizer of the “100,000 against the internet tax”.  Gulyás said he sees the future all around us.  The taxing of renewable energy.  Putin and Paks.  Gulyás mentioned the road fee as an example of the government taxing what it should not.  He said loyalty to Fidesz was the only thing that counted when it came to appointments, and in vain did Fidesz try to hide official statistics. “Poverty continues to grow even as the government deprives hundreds of thousands of youth of the possibility of obtaining a high school completion certificate. Fidesz has tricked everyone. Fidesz gives its buddies money even during a time of economic crises, while at the same time the libraries are living from day to day and the museums are collapsing.”

By the time KKDSZ president András Földiák took the stage, drizzling rain had started extinguishing the torches.  He noted that “they are lighting candles for Hungarian culture in 19 other cities.”  The KKDSZ president pointed out that the national anthem was written at a time of extraordinary spiritual darkness, and every development started in Hungary after this, which later led to the  revolution of 1848-1849.  “This is why the torches are alight,” Földiák told the crowd.  He spoke about the enormous damage caused by centralization, and the working poor “who dare not speak out because we are living with one foot in feudalism.”  He concluded by saying that “together we must try to conquer our fears.”

Actor Róbert Garai closed the demonstration with a reading of Attila József’s poem  “My homeland”,

For the benefit of our readers we reproduce here Sándor Kerekes’ recent English translation of this monumental poem first published in May 1937:

At night I was walking homebound,

I felt as velvety noises sway,

great, sleepy jungle was my soul

and people slept on the streets. It hit me,

whence from my mind, and my tongue

originates and will feed me,

the community that is husband

to this drunken, seductive

mother nature, or in gloomy

or ruminate here in the deep lair

of the night: the national squalor.

all doubtfully hopes to be redeemed,

will not be enough to prove:

it is high time to be liberated!

And in the company of

an adept community to

talk over hundreds of our troubles.

Under the spell of violence

so they rue those legislators,

as our beautiful race perish!

The landlord, for whom to the hernia

tree trunks and corn were lifted,

And who protected his doomed home,

To elect some wise parliamentarian.

Skittish are feathers on gendarmes’ hats

they smile and they guarantee,

to prescribe who the delegate be,

“openly,” decides, who, for a thousand years

is either furtive, or follows orders.

Our lords were not slothful, nor dumb

to defend their lands against us

and staggered a million and a half

of our people to the US.

His heart sunk, his legs trembled,

on snarling waves he drifted away,

One thought he was hearing cow bells

And his mate understood well

he is too dumb to send money home.

Our past is all jammed up together,

the new world will receive us.

The wage of the worker isn’t more

than what he fought for to score,

just enough for soup and bread

and for wine to make drunken roar.

they let to gather hostilities

and why they don’t support for the workers’

she knows nothing about cartels.

And on Saturday they slip in her hand

her pay and the penalty deducted:

chuckling the change: that’s all

you worked for, not nothing after all.

The rich is frightened by the poor

And the poor fears the rich.

Wile fear is governing us

and not fleeting hope’s pitch.

Wouldn’t grant rights to the peasant

He who eats the peasant’s bread

and the labourer dries yellow as straw,

but to raise demands  he dread.

Over the dale of a thousand years,

On his back the vagabond’s bag

walks away the people’s son.

He searches for an underling’s job,

Instead of strafing the grave

where his father is resting.

And yet, as Magyar, and as fugitive,

My soul cries startled on –

sweet Homeland, take me in your heart,

let me be your faithful son!

Let twaddle he the clumsy bear

I am a poet – tell your prosecutor

To leave my pen alone!

You gave peasants to oceans,

give humanity to humans.

So we won’t be the colony of Germans.

Let me write beauty and the good – to me

give my happier song!