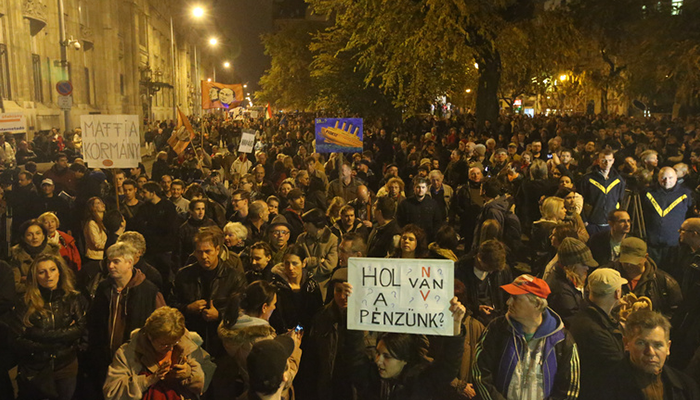 The people had finally risen up.  This should have happened long ago. – Elderly protester

Some ten thousand demonstrators took to the streets of Budapest Sunday evening to demand the resignation of senior tax officials and an end to corruption.  Protest organizers gave the Hungarian government one week to ask the European Commission to make an independent audit of Hungary’s National Tax and Duty Authority (NAV).

The demonstration was organized by Facebook group “1000 billion for correct taxation”.  The name refers to the estimated HUF 1 trillion (USD 4.6 billion) in annual taxes either not paid or illegally reclaimed by companies with good political connections, according to former tax inspector-turned-whistleblower András Horváth.

At 6 pm some five thousand protesters gathered in front of NAV’s main headquarters in Dob street.  Addressing the crowd as “fellow countrymen and taxpayers” former LMP MP Gábor Vágo demanded the European Commission conduct an independent audit of Hungary’s tax authority “since our country’s institutions have failed to address the NAV scandal”. He also called for the resignation of NAV president Ildikó Vida, deputy president Mrs. Dezső Csillag, the director of the special tax and duty main directorate Katalin Somos, and the head of the NAV audit department Marian Dávida.

After Vágo’s speech, the demonstrators marched to the Ministry for National Economy chanting “Orbán scram!” and “resign!”.  Demonstrators carried European Union banners and banners featuring “NAV world famous corruption”, “Mafia government”, “We don’t pay taxes to criminals”, “Enough of dictatorship” and “Where is our money?”.  By the time the crowd had reached József nádor square it had swollen to over 10,000 people. 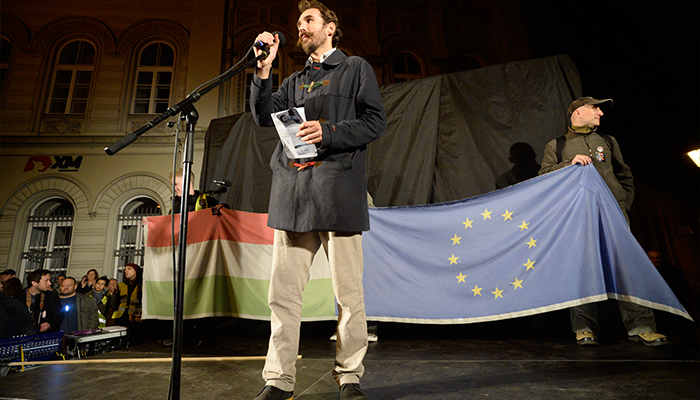 Taking the stage for a second time, Vágó gave the government one week to launch an investigation of NAV and one week for the NAV directors to resign “publicly, and looking the people in the eye”, adding that “if this does not happen then on November 17 we will hold a day of public outrage” in front of parliament and in towns and cities across the country.

Vagó called on everyone in the countryside to protest in front of their local NAV office.  “The government has been ignoring this matter for a year but in the last month it lied too,” said the former politician. “From tomorrow go individually or as a group to a NAV office, take a number and ask the NAV clerk whether Ildikó Vida has resigned yet.”

“Ildikó Vida, you say you want to lead an audit of matters that affect you. Then can I audit my own tax filing?” Vágo asked rhetorically, to the amusement of the crowd. He also told entrepreneurs who were being audited to ask their tax inspectors “have you been audited yet?”

IWIW founder Zsolt Várady then took the stage to tell the crowd that they had won the struggle against the internet tax, and the next step was to force Vida and the other NAV officials affected by the scandal to resign.  “We live in a country where those who steal and lie stay in power,” he said. Váraday announced that iwiw wants to launch a new public service website for those who want to organize and change things.  “We don’t want to live in a country where those in power cannot be questioned,” he told the crowd.

Performing artist Zoltán Békesi then told the crowd that “the government had built a state mafia” and that “Hungarian citizens must start taking their fate into their own” or “end up on the trashheap”.

The final speech was delivered by former tax auditor-turned-whistleblower András Horváth.  In a voice hoarse from shouting, Horváth told the crowd he had struggled for a year for the government to do something about systemic corruption.  “The NAV directors were still protecting their jobs when a world power, the United States, accused them of corruption.”  Horváth called on the Hungaran authorities not to wait for evidence from the US but to launch their own investigation.  He said that getting rid of Prime Minister Viktor Orbán was not the solution because in his place Chancellor “Johnny Lázár” would come, and nothing would improve.  Horváth said a new constitutional structure was necessary to ensure an end to corruption.

At the end of the demonstration the protesters observed a minute of silence in memory of civil activist Milan Rozsa who committed suicide Thursday night.  They then sang the national anthem.

An elderly protestor told ATV that “the people had finally risen up.  This should have happened long ago.”

“Hungary was the first example of democracy,” said one middle-aged woman.  “We have fallen and now we’re the last.  We cannot continue like this.”

“Orbán has become our country’s sickness,” said another middle-aged woman.  “I welcomed him but now I am extremely outraged over what he does with the people, or with the ‘nation’ as he likes to say.”

“The people are leaving the country” cried another woman.  “Families are worried their children will go abroad because they cannot live.”