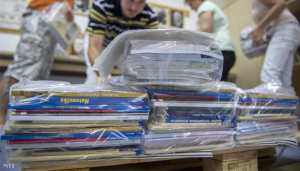 “The situation is critical. Parents are calling every day, telling us that they paid but that 2, 3, 4, 5 books are still missing.  It’s five times as much work. . . . In my opinion the whole system has failed.”

“It’s totally obvious that they are not up to the task.  They should have known beforehand they would not be able to handle it.  Such a task is beyond the ability of a single organization.  I don’t think they knew what they were getting into.”

On Tuesday 22 October 2013 Hungarian news portal Index.hu published an article entitled “Total chaos on the textbook front”. The article features a number of interviews with parents, teachers, and school directors indicating that eight weeks into the school year a large number of textbooks have yet to be delivered.

As part of far reaching structural reforms to public education introduced earlier this year, the Ministry for Human Resources centralized the distribution of textbooks.  Instead of each school ordering (and taking delivery of) textbooks from a publisher of their choosing, henceforth all textbooks are to be purchased from a government owned non-profit company.  The Kello textbook handling company undertook to package and deliver textbooks to 130,000 individual students.

Its task was complicated by the fact that, in accordance with the ministerial decree of 28 February 2013, all books are to be bundled and delivered to each student by name.  Index reports that in many cases the packing slip had been modified by hand, apparently without Kello’s data base being updated accordingly.  In the absence of reliable records school librarians have been given the task of inventorying books delivered to students.  In the meantime schools are being invoiced for books not received.  In many cases the invoices cannot be booked because they do not include the unit price of individual textbooks.

Never has the distribution of textbooks been as chaotic as the current school year, at least according to the Country-wide Association of Textbook Producers.  In an interview given this morning to ATV’s Start, Association director Judit Szarvas-Baller said the current system was conceived, planned and implemented by the government without consulting industry experts.  According to her schools are forbidden from distributing textbooks originally ordered for one student to another, as a result of which children changing school must wait weeks or even months to receive textbooks. She said roughly 30% of schools are still missing textbooks.

On Monday Ministry for Human Resources state secretary Andras Doncsev told parliament only 780 of 130,000 school book packages were missing.  “On a country level the textbook problem is within the margin of error, affecting only 0.6 per cent of textbooks ordered.”  According to Doncsev “in the majority of cases the missing textbooks are the result of mistakes or changes to the orders” and that “missing textbooks ordered by September 5th were delivered by October 15th”.

However, mounting anecdotal evidence indicates that the situation is not as Mr. Doncsev represented to parliament on Monday.

Index.hu reports that teachers have resorted to photocopying textbooks “at their own expense” or, when their allotment of photocopier paper runs out, “with parents supplying the paper.”   Many courses are being taught without textbooks because those called for by the new national curriculum never arrived. In the case of one school an entire grade received just three out of twelve textbooks ordered.   At another school Hungarian grammar and spelling is being taught without a textbook which never arrived.

The problem does not seem to be on the publishers’ end.  According to Index.hu parents and teachers who contacted the textbook publishers directly were able to obtain the missing textbooks within one or two days.  Few dare do so for fear of being found out.

According to one school official interviewed by Index.hu “the situation is critical. Parents are calling every day, telling us that they paid but that 2,3,4,5 books are still missing.  It’s five times as much work.  To quote one of the parents: ‘I paid by the deadline you expected of me.  In exchange I expect you to keep the deadline.  But as of October 15th five books are still missing from my child’s package.’  It’s my opinion that the whole system has failed.”

On Tuesday night, Politics Can Be Different (LMP) MP Agnes Osztalkan told ATV’s Egyenes Beszed  education state secretary Rozsa Hoffman had written her that supplemental orders for some 600,000 books were being filled “due to children changing schools during the school year”.  According to Osztolykan, who is an expert in educational matters, it cannot be the case that 5 per cent of Hungarian school children changed school between the time their parents paid for books in July and the start of school in September.

“Rozsa Hoffman doesn’t see beyond the window of her office.  She doesn’t travel among people, she doesn’t visit the schools, she doesn’t speak with parents” says Osztolykan. “She insists on following the letter of the law.  The problem is the government doesn’t care how the law translates into reality, how it actually affects schools”.  Osztolykan dismisses official figures as “government propaganda”.  “Government education officials are working in drone mode, repeating so many times that nothing is wrong they actually believe it.”

Part of the problem seems to be administrative.  The huge volume of orders caused Kello’s computer system to crash.  Nor does it seem to be able to keep up with the huge backlog of supplemental orders, many of which take several weeks to be entered into its central database.

But part of the problem may be financial.  According to State Treasury figures as of the end of September the Klebelsberg Institute owed HUF 1.2 billion, that is, nearly half the value of all textbooks to be purchased next year.  Are publishers refusing to supply additional textbooks to Kello until they get paid?

One thing seems certain.  Textbook publishers have little incentive to cooperate with the current government which has declared its intention to put them out of business.  According to Osztolykan on September 20th the Prime Minister’s office directed the Ministry of Human Resources “to devise a new system for producing quality textbooks”.  The Ministry subsequently issued a HUF 2.6 billion (USD 12 million) tender to supply all the country’s textbooks.  Only government organizations may submit proposals.  Privately owned publishers need not apply, either individually, or as part of a consortium.

Given the chaos surrounding the centralized distribution of textbooks one would think the government would learn its lesson and leave the writing and publishing of textbooks to the private sector.  It seems the current government believes the only way to ensure textbooks are rewritten to its liking is to put existing private textbook publishers out of business.