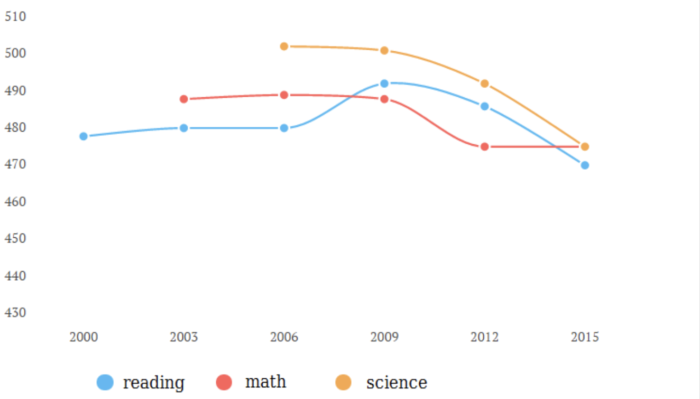 Test results for 2015 released by the OECD’s Programme for International Student Assessment (PISA) indicate that the scholastic performance of Hungarian students has been steadily declining since 2000.

PISA assesses the extent to which 15-year-old students, near the end of their compulsory education, have acquired key knowledge and skills that are essential for full participation in modern societies. The assessment focuses on the core school subjects of science, reading and mathematics.  It also assesses students’ proficiency in an innovative domain, which, in 2015, was collaborative problem solving.

The test has been administered every three years since 2000.

The 2015 test measured the performance of half a million 15-year-old students spanning 72 countries in mathematics, reading and natural sciences, including 5,600 students from 200 schools in Hungary.

The test yielded average OECD scores of 493 points in science, 493 points in reading, and 490 points in mathematics.  Hungary’s test results were far below OECD averages in every subject, with sharp declines compared to average scores from 2012.

Hungary’s 2015 PISA scores were the following

Hungary’s scores were 16 points, 23 points and 13 points below average, respectively. Of the 35 OECD countries, Hungary ranked 28th in science, 28th in mathematics and 30th in reading.

Hungary’s test results revealed larger than average disparities in the quality of its schools as well as in the performance of students coming from successful families and that of disadvantaged students.

In response to the disappointing test results, Hungary’s Ministry of Human Resources issued a brief press release explaining that most Hungarian students who took the test were in 9th grade while 10th graders more often took the test in other countries, and that many of them may not have been familiar with the digital format of the test.

Another possible explanation for the poor results is that, according to the 2015 PISA survey, among the 72 participating countries, only Mexico, Chile and Turkey spend less than Hungary on educating 6- to 15-year-olds.