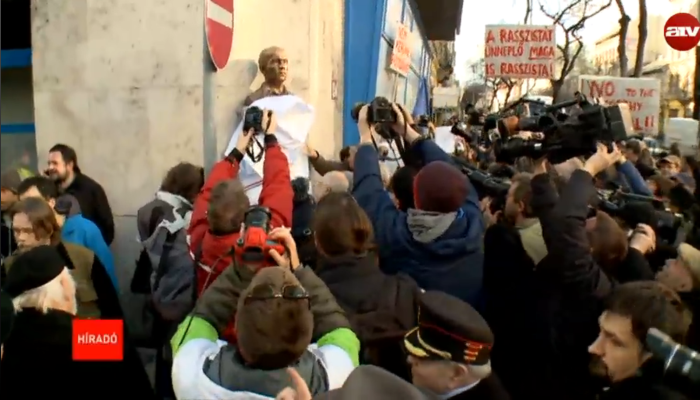 “The statue erected near the Páva street Holocaust Memorial Center insults the memory of our murdered Hungarian compatriots, and is the most recent attempt to whitewash the Horthy era.” – Democratic Coalition

A group of 30 or so protestors chanting “Democracy!” and “Never again!” and carrying various signs disrupted the formal unveiling of a bust to anti-semitic Hungarian politician György Donáth on Thursday in Budapest’s 9th district.

Police looked on hopelessly as demonstrators holding signs stripped the bust of its cover. 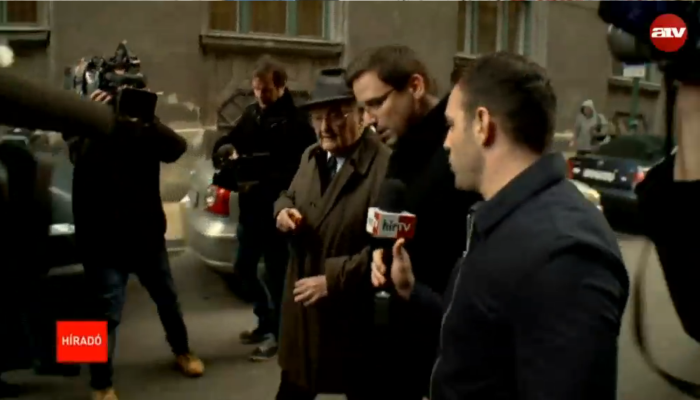 Before departing, Gulyás (center) told a reporter that there are many persons in Hungarian history whose lives are contradictory, but who died a martyr’s death in defense of Hungary’s independence.  The ruling party member of parliament said Donáth was one such politician deserving of remembrance.  Those familiar with his life knew that he opposed the Nazi invasion and every other kind of invasion.

“I do not agree with any harmful remarks pertaining to any community,” Gulyás said. “However, irrespective of that, if someone gives his life for Hungary’s independence and Hungarian democracy, and if he saves the fellow accused in a trial by deliberately choosing a martyr’s death,” then such an individual is worthy of remembrance, said the chairman of the parliamentary legislative committee generally regarded as Prime Minister Viktor Orbán’s prototype.

Boross (seen here to the left of Gulyás) said Donáth’s writings, lifetime achievements and heroic death should be taken into account when judging him.

Among those protesting were Együtt (Together) and Hungarian Socialist Party (MSZP) district representatives. 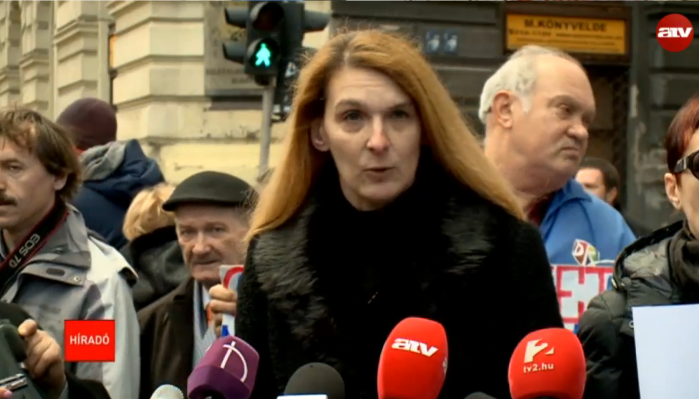 Budapest District 9 assemblyman Krisztina Baranyi called Donáth  “a man of hate” who was “equally hateful of Jews, Swabians and Romanians”.  She said it was a crime to erect a statue to such a person, and in poor taste to do so within a few meters of the Holocaust Memorial Center. Baranyi said the bust had been paid for with HUF 15 million (USD 54,000) of public funds remitted by the Public Foundation for Freedom Fighters to an organization called “The Society of Politically Condemned”, and she was still awaiting an answer from the District 9 local government whether it had supported the erection of the statue financially and, if so, the amount involved.

MSZP MP Anita Heringes said Donáth was a determined anti-semite and race protector who proponent of the anti-semitic laws. For this reason, she added, Gulyás had no business attending an unveiling ceremony in his capacity as deputy chairman of the Hungarian-German friendship association.

MSZP deputy parliamentary fraction leader Tamás Harangozó said they were erecting a statue to a man sentenced to death by an inhuman, unacceptable communist system, but this did not change the fact that earlier in life Donáth was an open anti-semite who was also opposed to the German and Romanian minorities.

Joining the protest were supporters of Democratic Coalition, which issued the following statement:

“The statue erected near the Páva street Holocaust Memorial Center insults the memory of our murdered Hungarian compatriots, and is the most recent attempt to whitewash the Horthy [Regent of Hungary, 1920-1944] era.”