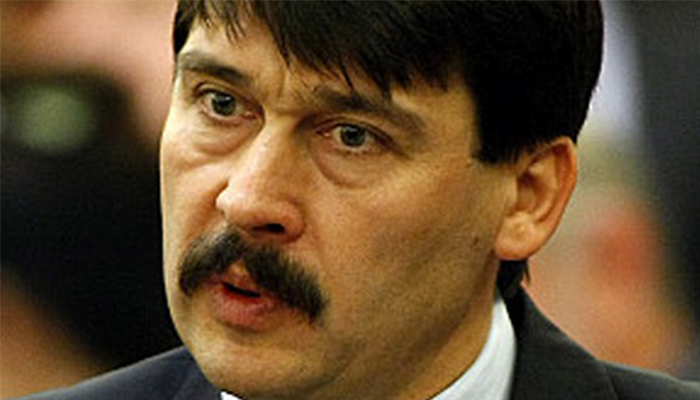 Hungarian President János Áder may have done Prime Minister Viktor Orbán and his Fidesz party a favor by forwarding two highly controversial bills to the Constitutional Court for review because 11 of the 15 court’s justices have been appointed since Fidesz returned to power in 2010.  One seat is vacant and the terms of the final three justices appointed before the second Orbán government are due to expire in April and are expected to be filled later this year.

The Constitutional Court has been asked by Áder to comment on the constitutionality of an emergency bill to conceal how public funds are spent by companies and foundations owned by the National Bank of Hungary and a bill to hide the Hungarian Postal Service’s contracts with private companies.  Parliament adopted both bills on Tuesday of last week despite the former being submitted only the previous day.

The bills flew through the Fidesz-controlled parliament with ease thanks to the unilateral and unanimous support of the ruling Fidesz-KDNP political alliance.

It took a few days for Speaker of the National Assembly László Kövér (Fidesz) to sign the bills and forward them to the Sándor Palace for Áder (also Fidesz) to sign into law.  However, this time Áder forwarded the bills to the Constitutional Court.

Each of these bills was proposed and voted on at a time when both the National Bank of Hungary and Hungarian Postal Service are fighting lawsuits over access to data on public expenditures. Depending on how the Constitutional Court rules, both laws could potentially influence the rulings of lower courts in ongoing cases.

According to Miklós Ligeti, legal director for Transparency International Hungary, while it is certainly a positive gesture that President Áder did not sign the two controversial bills, his explanation for why he chose to refer them to the court gives cause for concern.  “It’s almost like a doctor prescribing aspirin to someone diagnosed with a terminal illness,” says the legal expert.

“The bills prevent citizens from accessing data related to the investments of the Hungarian Postal Service and the National Bank of Hungary. The idea behind these bills is to grant both organizations the right to deny access to information related to their investments if they feel that public knowledge of their economic activities may result in some kind of disproportionate damage to their business interests,” says Ligeti.

“Both laws say that the public availability of such information would result in providing undue advantage to their business competitors, thereby resulting in disproportionate damage being done to the organization in question.”

According to the Transparency International expert, neither bill offers more than a vague definition of what constitutes a legitimate reason for rejecting access to public information on grounds of “disproportionate damage.”  His organization is of the opinion that, because both state bodies use public funds, they must tolerate a higher level of scrutiny over such use.

Ligeti says both pieces of legislation contain passages that put restrictions on currently pending legal disputes, thus preventing lower courts from obliging the National Bank and Postal Service to disclose how they are using public funds.

In his letters to the Constitutional Court, Áder criticized the immediate application of the bills — which is a valid point, says Ligeti. “But this is far from being sufficient. Should the Constitutional Court rule in favor of Áder’s concerns, this opens the door for future legislation which puts serious limits on the accessibility of data related to public spending.”

The legal expert is concerned the result will be more stringent limitations on the accessibility of information related to the use of public funds in the future. The Constitutional Court’s ruling may require information be made public in the case of ongoing cases but would also allow the National Bank and Postal Service to refuse similar requests in the future.

Even if the court finds that Áder’s specific concerns are warranted, the remaining provisions of these bills will severely curtail the transparency and insight into the activities of the two bodies, according to Ligeti.