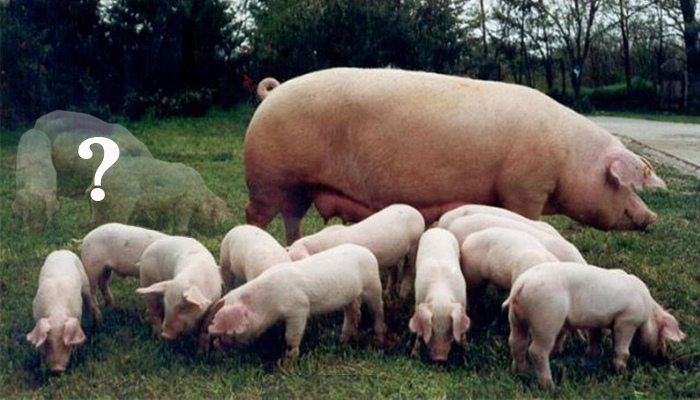 These are some of the main findings of a 2014 study prepared by the Agricultural Economic Research Institute that was subsequently banned by the Ministry of Agriculture, reports nol.hu.

Intended to serve as the basis for an 18-month open, expert discussion, the report was never released for reasons its authors cannot fathom, reports the daily online.

The authors of the report did not do anything over the course of their examination the state could not have done. They simply compared the different data and ask themselves:  if someone delivers one thousand pigs to Austria, why is it that only 800 arrived? Probably because sales to other countries within the EU are not subject to value added tax (VAT), whereas within Hungary they are.  The missing two hundred animals became the victims of VAT tax-exempt black slaughtering at domestic slaughterhouses. Except that more pigs disappear each year than domestic slaughterhouses could process, according to the researchers. The big slaughterhouses claim that it is technologically impossible that anyone could process dozens of pigs at night in secrecy.

The researchers compared Hungarian and Danish pigs and found that a Danish pig requires 2.68 kg of feed for every 1 kg of weight it puts on.  In the case of Hungarian pigs, this is 3 kg.  Although this can be caused by differences in conditions in which the pigs are raised, it is suspicious that a Danish sow has an average of 33 piglets annually whereas a Hungarian sow only has 23.  So once again a large number of pigs have gone missing.

The authors of the study thoroughly researched the food sector and concluded that the Hungarian pig producers raise and slaughter the missing pigs in secrecy.

According to their estimates, the size of the black economy depending on county ranges from 32.5% to 49.9 percent.   The hidden economic activity in 2012 ranges from 650 to 1200 billion forints in this sector alone, including illegally reclaimed value added tax after fictive exports.  We are talking about huge sums if we take into consideration that in the same year the sector received HUF 650 billion worth of development and agricultural subsidies.

Those working in the sector employ even more sophisticated methods.  At the time the study was prepared an agricultural producer could choose from 10 or 12 different methods of paying taxes depending on whether they were primary producers, individual or group producers, and whether they were subject to VAT.  The primary producer status offers a choice of seven different ways of accounting for expenses and paying taxes.  However, they worked out the best way to minimize taxes.

A primary producer needn’t declare the first HUF 600,000 worth of income.  For this reason every family member over 16 is a primary producer, at least on paper.  The family distributes income to the daughter with the fake fingernails, the mother administrator and the son playing soccer.  In this way the four-person family needn’t pay any taxes after the first HUF 2.4 million (HUF 50,000 per head per month), even though the father is the only one actually performing the work.

The researchers interviewed market actors and concluded that part of the primary producers paid attention to revenues with their accountant.  When they reach the tax-free limit, they inform the customers that there is no more produce.  It was stolen, frozen, damaged by ice.  Nothing left.  Of course, there is but they are only willing to sell it to those who do not require an invoice or certificate of origin.

According to the study, in 2012 only 7 percent of primary producers declared revenues exceeding HUF 8 million.  Among them, every fourth (26 percent) lived from nothing, but from this they undertook improvements.  The official income of half the primary producers did not reach minimum wage.

According to a copy of the study delivered to nol.hu, the researchers acknowledge that the ministry and the government took several steps to combat the black market in food production and agriculture which they recommended, including decreasing the VAT on food items, but that the picture was still bleak.

The Agricultural Economic Research Institute is one of 73 governmental institutions to be wound up and folded into the Ministry of Agriculture.