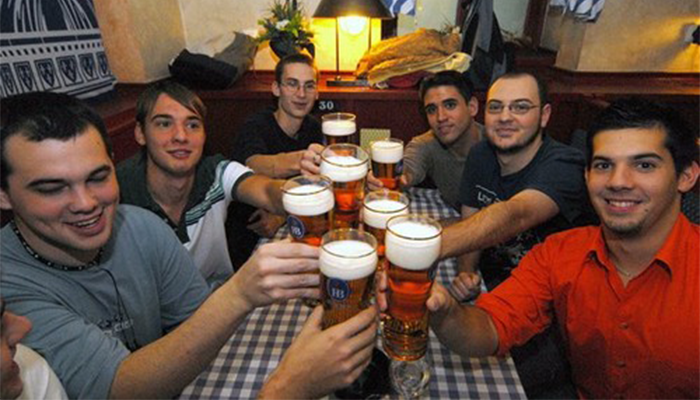 Alcohol consumption in Hungary: twice the global average but in line with the rest of Eastern Europe.

A recent study by the World Health Organization (WHO) shows that, like their eastern European neighbors, Hungarians like to drink! A LOT!

The WHO report notes that the European region contains just 14.7 percent of the world’s population above the age of 15, but accounts for 25.7 percent of the total alcohol consumed worldwide.

The report suggests that direct economic costs of alcohol consumption affect major institutions providing a societal response to a problem such as hospitals and the health system, the police and the criminal justice system, and the unemployment and welfare systems. However, direct health sector costs appear to represent only 9-24 percent of all alcohol-attributable social costs. Direct costs also include significant costs in the justice sector caused by, for example, damage to property from vehicle crashes and arrests for being “drunk and disorderly”, as well as increased crime.

Another major category of alcohol-attributable social costs is indirect and includes lost productivity due to absenteeism, unemployment, decreased output, reduced earnings potential and lost working years due to premature pension or death. These indirect costs are typically borne by society at large because the alcohol-attributable loss in workforce productivity can affect the economic viability of an entire community.

According to the study environmental factors such as economic development, culture, availability of alcohol and the level and effectiveness of alcohol policies are relevant factors in explaining differences and historical trends in alcohol consumption and related harm. Alcohol-related harm is determined by the volume of alcohol consumed, the pattern of drinking, and the quality of alcohol consumed. The harmful use of alcohol is a component cause of more than 200 disease and injury conditions in individuals, most notably alcohol dependence, cirrhosis of the liver, cancer, and injuries. The latest causal relationships suggested by research are those between harmful use of alcohol and infectious diseases such as tuberculosis and HIV/AIDS.

Worldwide consumption in 2012 was equal to 6.2 litres of pure alcohol consumed per person aged 15 years or older, which translates into 13.5 grams of pure alcohol per day. A quarter of this consumption (24.8 percent) was unrecorded, i.e., homemade alcohol, illegally produced or sold outside normal government controls. Of total recorded alcohol consumed worldwide, 50.1 percent was consumed in the form of spirits. Worldwide 61.7 percent of the population aged 15 years or older had not drunk alcohol in the past 12 months. In all WHO regions, females are more often lifetime abstainers than males. There is a considerable variation in prevalence of abstention across WHO regions. Worldwide about 16 percent of drinkers aged 15 years or older engage in heavy episodic drinking. In general, the greater the economic wealth of a country, the more alcohol is consumed and the smaller the number of abstainers. As a rule, high-income countries have the highest alcohol per capita consumption (APC) and the highest prevalence of heavy episodic drinking among drinkers.

In 2012 139 million DALYs (disability-adjusted life years), or 5.1 percent of the global burden of disease and injury, were attributable to alcohol consumption. There is also wide geographical variation in the proportion of alcohol-attributable deaths and DALYs, with the highest alcohol-attributable fractions reported in the WHO European Region.

Alcohol policies are developed with the aim of reducing harmful use of alcohol and the alcohol-attributable health and social burden in a population and in society.

Such policies can be formulated at the global, regional, multinational, national and subnational level. Many WHO Member States have demonstrated increased leadership and commitment to reducing harmful use of alcohol in recent years. A higher percentage of the reporting countries indicated having written national alcohol policies and imposing stricter blood alcohol concentration limits in 2012 than in 2008.

Here Are The Drunkest Countries In The World, Business Insider; 12 May 2014