Kristóf Altusz, an undersecretary with Hungary’s Ministry of Foreign Affairs and Trade, has summoned the chiefs of mission of both the United States and German embassies in Budapest, because senior officials in their respective countries have publicly expressed concern over the higher education law passed by the National Assembly on Tuesday, now commonly called Lex CEU.

In an address to the European Parliament Tuesday, German President Frank-Walter Steinmeier (pictured above) said Europe should not remain silent when civil society and academia are being attacked in Hungary.

“If we have debates in Europe, we are debating from the same platform,” Steinmeier said. “There are many complex questions but nothing can call into question our most important values: freedom, democracy, rule of law and human rights. These are enshrined in the Article 2 and all Member States are bound to this. This is the point of Europe. This is what the world sees of Europe, and this is what so many envy. When we speak up for human rights and the rule of law, we cannot deny that these values are being shaken within Europe itself. Europe cannot remain silent when civil society organizations or the academic world are being suffocated, as is happening right now in Budapest at Central European University.” 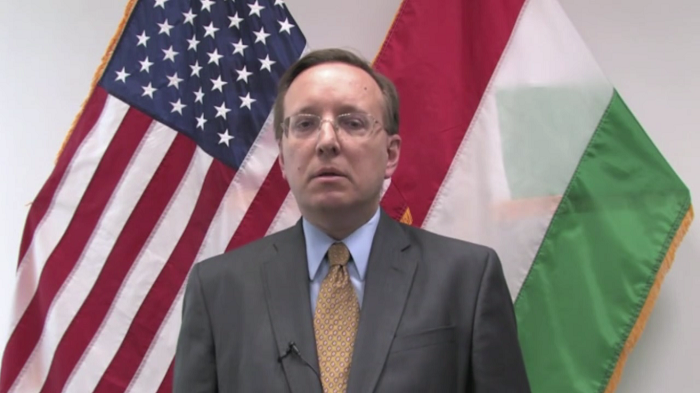 US Embassy Chargé d’Affaires David J. Kostelancik (pictured) has also ruffled some feathers in Budapest with comments on the newly adopted higher education law. Last Wednesday, Kostelancik released a statement calling on the Hungarian government to avoid taking any legislative action that would compromise CEU’s operations or independence. Two days later, the US State Department in Washington released a nearly identical statement.

It did not take long for Hungary’s government spokesperson Zoltán Kovács to fire back, declaring that “Hungary is a sovereign nation.” Kovács’ response finished with a plea for the two nations’ governments to meet.

“[T]he Government of Hungary is ready to engage in talks with the Government of the United States with respect to György Soros’s [sic] university in Hungary,” Kovács wrote.

This week, Lex CEU was adopted by means of an expedited legislative process on Tuesday. Shortly after the law was adopted, Kostelancik released a video response.

“The United States is disappointed by the accelerated passage of legislation targeting Central European University, despite the serious concerns raised by the United States, by hundreds of local and international organizations and institutions, and by thousands of Hungarians who value academic freedom and the many important contributions by Central European University to Hungary,” he said.

“The Central European University is a successful and prestigious American-Hungarian institution and has been an important component of the U.S.-Hungarian relationship for 26 years. The United States will continue to advocate for its independence and unhindered operation in Hungary.”

Tuesday evening, the Ministry of Foreign Affairs and Trade released a statement announcing it would summon the acting chiefs of mission from Germany and United States “in connection with the higher education law issue.”

The ministry statement continues by explaining that Lex CEU is really only a law about higher education and “any statement to the contrary is false.”