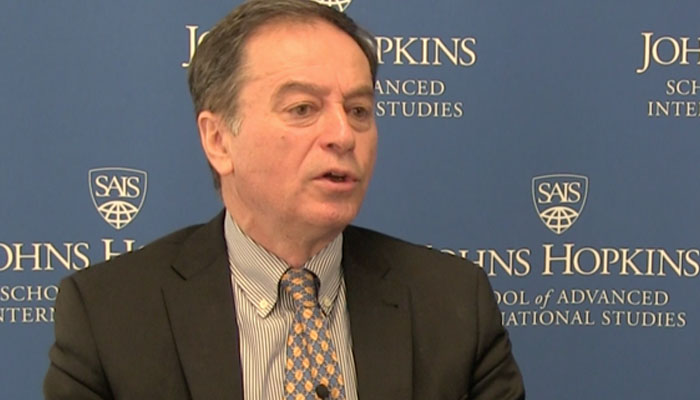 “Hungary is a country that could be an amazingly prosperous country if it embraced modernism.  If it embraced social modernization.  If it embraced technology.  If it spent money on education.  If it exploited the minds of Hungarians which are undeniably brilliant.  Just look at all the successful entrepreneurs of Hungarian descent in the United States. That’s what Hungary should do.  And the best way to do it is to embrace the way America does it.  It does not mean that you have to accept everything the Americans do.  It does not mean importing the American way.  It is embracing some of the mechanics of being successful that are best done in the United States and mixing it with what we Hungarians are about.”

The Budapest Beacon interviewed András Simonyi, managing director for the Center of Transatlantic Relations at the Paul Nitze School for Advanced International Studies at Johns Hopkins University in Washington DC, to discuss Russia President Vladimir Putin’s visit to Budapest on Tuesday and its broader implications for Hungary’s foreign policy. Simonyi has previously served the Hungarian ambassador to the North Atlantic Treaty Organization (1995-2002) and as the Hungarian ambassador to the United States (2002-2007).

The former ambassador believes the visit signifies Hungary’s turning away from the community to which it belongs.  He likens Prime Minister Viktor Orbán’s obvious excitement at being in the company of Putin to a “rock-n-roller meeting Mick Jagger for the first time”.

“You don’t have to come all the way to Washington to see that a war is being waged in a neighboring country and that people are being killed by rebels who are supported by Russia at the will of the Russian President.  And at the same time a member of the alliance, NATO, and the European Union that is supposed to embrace human rights, democracy, freedom, respect for others, respect for minorities, is receiving with the loudest fanfare the leader of Russia in Budapest–a person that is a declared enemy of the United States. We are embracing that person. It is simply wrong.”

The former diplomat made it clear that he was not advocating Hungary cutting ties with Russia, but warns that, as a small country, “Hungary can only do business with Russia if it’s solidly cemented into the Western institutions.”

“You can do a lot of business with Russia if you know that your security and your economic prosperity is not totally dependent on Russia. That is why, first things first, you cement your relationship with the United States, with the European Union, with the Western allies, and then you can do business with Russia.  This ‘balancing act’ is nonsense.”

Simonyi says that with this “political embrace” comes “serious influence” which he is loath to see.  He says Putin’s goal is to split the Alliance and to split Europe.  Hungary should not be “a partner to countries that are assisting in the dividing of Europe and the division of Europe and the United States”, and Orbán’s pro-Russian foreign policy has made Hungary “more vulnerable than it was before.”

“I think what Hungary is actually doing is making itself much more dependent on Russia than it needs to be. I think Hungary is becoming indebted to Russia in the long term. I think this opens the way for Russia, Russian politics, Mr. Putin, to have a much bigger influence in Budapest than I would like to see. Russia should not have any influence in Budapest.”

Simonyi says Hungary’s current foreign policy is damaging its relationship with its allies. He says successful diplomacy manifests itself in strong diplomatic relations, access and opportunities, but Hungary’s foreign policy is causing the country to miss out in these areas.

“Ten years ago Hungary in Washington was at the top of its game. Hungary was in a league with countries like Denmark, Sweden, Norway, the Dutch, Belgium.  Consider the way Hungary was viewed in terms of investments. Just look at the amazing influx of foreign direct investment into Hungary 10-15 years ago. You can’t see the same today. Hungary was considered one of the most solid allies that had a view, that had a position, and it could make its position.  Even if it was in disagreement with the United States, it could make its case with credibility because it was known in Washington that at the end of the day Hungary does this in order to improve the transatlantic relationship in order to strengthen the transatlantic relationship.

“Hungary is a country that could be an amazingly prosperous country if it embraced modernism.  If it embraced social modernization.  If it embraced technology.  If it spent money on education.  If it exploited the minds of Hungarians which are undeniably brilliant.  Just look at all the successful entrepreneurs of Hungarian descent in the United States. That’s what Hungary should do.  And the best way to do it is to embrace the way America does it.  It does not mean that you have to accept everything the Americans do.  It does not mean importing the American way.  It is embracing some of the mechanics of being successful that are best done in the United States and mixing it with what we Hungarians are about.

“We are a proud nation, we should have confidence in our abilities and the best way to exploit all this is to embrace a relationship with the West and with America. But Hungary is embracing a country that is in decline, a country that is totally dependent on one source which is its energy. Russia is blackmailing Europe with its energy resources. That simply isn’t the way ahead for Hungary.”

Simonyi, who is also an accomplished blues guitarist, says Orbán’s excitement during Putin’s visit gave Orbán the appearance of being the “happiest man in the world”.

“If you’re a rocker and you play the guitar and Mick Jagger tells you that you can be on the world stage with him, you’ll be the happiest man in the world. That’s what he looked like. The problem is that in politics Mr. Putin is hardly Mick Jagger. He thinks he’s Mick Jagger but he’s not Mick Jagger.”

Simonyi thinks Orbán’s foreign policy is driven by a mixture of ideology and opportunism.   He believes Orbán has crafted a “very messy ideology” that has resulted in a “messy foreign policy.”

“People are asking me, ‘What is this? There’s no clarity!” I don’t think they always know what they’re doing. I think they’re just following the instincts of what they’re supposed to do because it might make Orbán happy. I think the only person who might understand what all of this is really about is Orbán himself.”

Simonyi says he would prefer to see a Hungarian foreign policy based on principles Hungary should be embracing, namely the “transatlantic principles” which also constitute the fundamental ideals of the European Union and NATO.

“I think it’s absolutely clear to us what it is. It’s democracy.  It’s transparency.  It’s respect for the rights of minorities.  It’s the checks and balances.  It’s on these things that you can build a very solid foreign policy.”

Simonyi believes Hungary can best promote the well-being and interests of its citizens by maintaining strong transatlantic relations.  He says he has always looked towards the West and does not believe there is an alternative for Hungary.

Simonyi recounts how a leading Polish politician recently told him that the Poles have a saying, to wit: For the last 150 years the Hungarians have always chosen the wrong sides.

In Simonyi’s opinion, the only one to benefit from Putin’s visit to Hungary was Putin himself.  Simonyi does not believe the visit was a testament to Orbán international influence.  Rather, he believes Putin is playing on the West.

“This visit to Budapest was not Viktor Orbán’s victory. This was Vladimir Putin’s victory. Of all places in Europe, he is invited to Hungary! The same Hungary that has suffered so much under Russian occupation for so long! And he comes to Budapest and he delivers the message: ‘I’m back! At the end of the day I conquered Hungary!’ You could see that! I mean his joy was the fact that he was in Budapest. No other city in Europe would have made him more happy than the capital city of Budapest where the 1956 revolution was broken by Russian troops.”

Simonyi believes Orbán is “probably living in a dream world” in which he is “an important global player.”

“But I’ve got news for you: [Orbán] is not a significant leader internationally. It’s not good to be a leader when you’re a troublemaker. The way it comes across here in Washington is that Mr. Orban might be a very smart politician but in the grand scheme of things he’s the troublemaker of the family.”

Simonyi accuses Orbán of using his membership in the European People’s Party “not as a bargaining chip but as a means of blackmailing consensus-based communities” like the EU.  However, the former diplomat warns that blackmail is not good long-term diplomacy.  He says cooperation, solidarity, respect for one’s allies and support for majority ally views, “even if you disagree with them”, is the secret to successful diplomacy in the long run, and that being constructive and being helpful is what is expected of Hungary.

Simonyi says that when he was ambassador there were serious differences in point of view between the United States and Hungary, but that when all was said and done “it was understood that Hungary wants to be helpful and constructive.”  He warns that it is now dawning on Hungary’s allies in Washington, Berlin and Brussels that “something isn’t right.”

“They don’t know how to deal with it because of the place this is coming from–a country that used to be the leader of the pack in terms of transatlantic relationships, in terms of embracing European and transatlantic values, in terms of turning away from the past and turning towards democracy and a transparent market economy.”

When asked to compare German Chancellor Angela Merkel’s visit to Hungary with Putin’s, the former diplomat said it was clear from the Chancellor’s body language that her visit was not a happy one.

“That was not a happy German Chancellor. But Tuesday’s Putin was a happy Russian President. Let me leave it at that.”

“I think that’s something Mr. Orban should keep in mind. The things that happened during Putin’s visit will give Hungarians second thoughts. I can already see that. I can see a lot of good media, not the state media, and not the less courageous, but I see a lot of outlets talking openly about what a disaster this visit was.  So don’t misunderstand me. I remain optimistic but I want to help Hungarians understand why this visit was not a good visit for Hungary.”