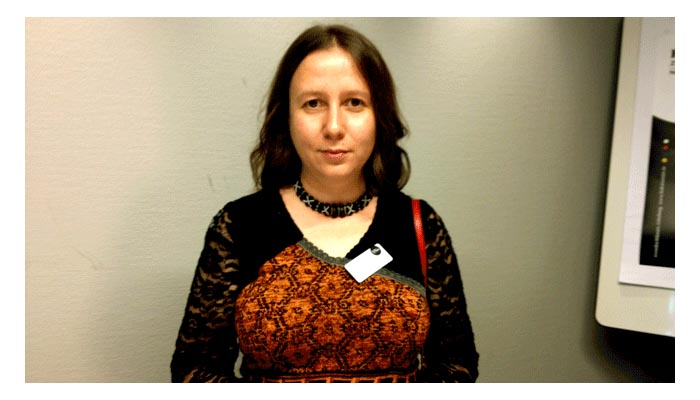 “(Putin) is infallible. He is a priest, a god, a victim and a Christ-like figure all in one. He is a product of Russia’s history, Russia’s corruption, Russia’s culture and the country’s oligarchs.”  – Anna Arutunyan, Russian journalist and author

Russian journalists Anna Arutunyan and Valery Panyushkin discussed their work and the state of Russia with Hungarian foreign policy journalist Zoltán Vígh at Brody House Studios in Budapest on Wednesday, just two days before the assassination of Russian opposition leader Boris Nemtsov. The event is part of a series of literary dinners hosted by Anglo-Hungarian event planner Rosie Apponyi.

The Budapest Beacon interviewed Anna Arutunyan following the event to find out more about her recent book, how she sees Russian President Vladimir Putin and how to put Russia’s democracy in perspective.

Panyushkin has worked as a special correspondent for the newspapers Kommersant and Vedomosti.  He wrote a regular column in Gazeta.ru, and earned the “Golden Pen” award for his journalism. He is the author of “Mikhail Khodorovsky: A Prisoner of Silence”, “Gazprom: The New Russian Weapon”, “Something Unnoticeable”, “Twelve Who Don’t Agree” and “Luxury Russian Style”. He lives in Moscow and currently works as a correspondent for Snob magazine.

Arutunyan is a Moscow-based Russian-American journalist and writer, formerly of The Moscow News. She writes for publications including Open Democracy and The Exile and The Nation, and is the author “The Media in Russia” and newly released “The Putin Mystique: Inside Russia’s Power Cult”.

Anna Arutunyan on writing about Russian politics for a Western audience

“We’re not getting something here,” Arutunyan says of writing about Russian politics for a Western audience.

“We’re using comfortable terms like democracy, parliament, elections, president, and they’re just not working to describe what’s going on [in Russia]. What’s going on here is all about raw power.

“I was fascinated by Stalin when I was a teenager, not by Stalin the human being but instead by what drives people to fully follow this leader, or to kill in his name, or die for him. It’s a pattern, a phenomenon very present in Russia,” she says.

Her interest in understanding Russia’s current power structures required her to look beyond Putin.

“I had to really look into all layers of society. The more I dug, the more I came to understand that it’s not so much about the cult, it’s about the relationship between the people and the state. That’s what the Putin mystique is all about,” Arutunyan says.

Authoritarianism as a situational-sensitive phenomenon not unique to Russia

“We’re talking about economic, geographical, social, religious and cultural conditions aligning in such a way that the only solution to all of these problems is authoritarianism,” Arutunyan says of Russia’s current mainstream political environment.

“But it’s not because of Russia. It’s because of specific circumstances that combine to create the status quo. In another sense, I’d put it this way: I don’t really believe that democracy and rule of law is the natural state of human society. it’s an exception to the rule, it’s not the rule itself. It’s not the default state that people are going to resort to if they’re just left alone by the government. That state is authoritarian,” she says.

It would be wrong to presume that there was an inherent democratic situation in Russia until someone suddenly came along and destroyed it and started oppressing civil society.

“It wasn’t a democracy by any longshot. Just because you have elections doesn’t mean that you have functioning democratic institutions. Just because you have freedom of the press and free elections, it doesn’t mean you have democracy. Essentially, if you’re going to talk about democracy in Russia in the modern period, the closest thing to a democracy in Russia would have been what existed in the period between 1991 and 1993. After 1993, when the president used lethal force against his own parliament, you couldn’t talk about democracy any more.”

Arutunyan doesn’t think a lot has changed since then. She sees what is happening now in Russia as a continuation of what happened earlier.

“It’s not like [Putin] at one point just decided to start oppressing civil society. There was no civil society to begin with. What they started doing was that when civil society started trying to form [Putin] started oppressing it. But then again that’s exactly what Yeltsin did to his own parliament when it started disagreeing with him.”

The difference between Putin and Yeltsin

“Putin and Yeltsin differ in that Yeltsin believed himself to be a democrat, and he was also very much in favor of maintaining this semblance of democracy, maintaining free elections,  freedom of the press, etc., and to some extent so was Putin. Up until a point. Until it became, from his perspective, impossible to do so, or too burdensome.

“The fact that an authoritarian leader would step down from a presidential seat and anoint a man considered to be a liberal to be president as his successor, I’m talking about Medvedev, in a situation where [Putin] could have easily held a referendum and remained in power, that shows that Putin wanted some sort of democratic semblance. That says a lot. It’s very often overlooked. Medvedev was a placeholder, but he was also much more than just a placeholder. There was nothing keeping him from changing the constitution,” says Arutunyan of Putin’s decision to have Dmitry Medvedev take over the presidency of the Russian Federation in 2012.

Arutunyan thinks Putin’s decision to hand Russia’s presidency to Medvedev was symbolically important because it helped cast the illusion of democracy for Russians. But by 2012 that no longer mattered for Putin.

“In 2012, Putin just got tired of keeping up the semblances. It just got too difficult and he gave up,” she says.

This was when it became clear that Russia had embarked down a dangerous path. “When you’re pretending to play democracy, it’s still more democratic than when you’re not pretending,” Arutunyan says.

“[The West] thinks they’re dealing with Putin the person, and they think that Putin is making all of the decisions, but they’re overlooking the fact that he’s a phenomenon reflecting a natural force of things. He embodies a lot of what is happening in Russia and it’s just easier to pinpoint all the problems on one man. All of your focus concentrates on one node and that’s how [Putin] becomes an institution. Any president, any leader, including Putin, Poroshenko, Obama, to some extent is a hostage to whatever political system he is the head of.

“In the Ukraine situation Putin can’t single-handedly tell his armies, his soldiers and his volunteers to stop fighting in Donbas. It’s just not going to happen. Similarly, [Ukraine President] Poroshenko can’t tell his volunteer battalions to adhere to the ceasefire if they don’t want to. It’s just much more complicated than that.”

Putin as a “national phenomenon”

“If you look at the behavior of a pack of dogs, and you look at the behavior of the pack of dogs around the leader, you’re also going to see an institution. It’s a perfectly natural concept. It’s the same here. It’s just that humans are more sophisticated in their power exchanges so there’s a lot of money, property, etc., involved in it. Putin is not the head of ten people, he is the head of a 140 million people. That’s why it gets so complicated.

“Essentially, you can narrow it down to a leader of a tribe. You’ll see a lot of parallels. He has to be physically strong, or have the appearance of being physically strong. He is infallible. He is a priest, a god, a victim and a Christ-like figure all in one. He is a product of Russia’s history, Russia’s corruption, Russia’s culture and the country’s oligarchs . . . .”