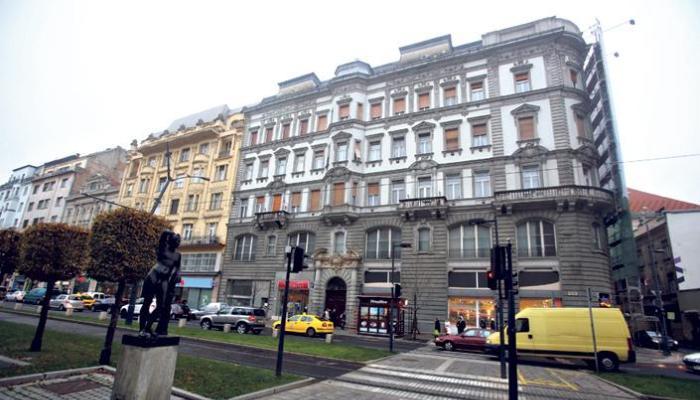 “I conducted an investigating of the real estate matter at the end of 2012.  While there was no indication of unlawful activity, I initiated the termination of the district notary.” – Antal Rogán, Fidesz MP and former mayor of Budapest’s District V

On Saturday Blikk reported that the district government sold a 212-square meter shop on the ground floor of the Károly krt. building pictured in 2011 for less than half of fair market value.  The buyer, Classic Immo Kft., is wholly owned by a holding company whose CEO is the long-time girlfriend of a convicted murderer, Tamás Portik.

Portik, who reportedly got rich in the 1990s importing oil illegally, was convicted in 1996 for ordering the murder of entrepreneur József Prisztás.  He is also suspected of complicity in the 1998 car bomb that exploded in Aránykéz street in downtown Pest.

Blikk reports that Classic Immo Kft. had rented the property for two months before applying to the district for the right to purchase it.  Prior to that, the property had been rented to an art gallery that was evicted in the spring of 2011 for refusing to accept a rental increase.

When asked to comment on the matter, Antal Rogan blamed former district notary László Rónaszéki for the deal while, at the same time, denying anything illegal had taken place, stating: “I conducted an investigating of the real estate matter at the end of 2012.  While there was no indication of unlawful activity, I initiated the termination of the district notary.”

Rogán’s explanation is hardly satisfactory in light of Sunday’s revelation that it was Rogán himself who informed the district city council on 10 October 2011 that they had signed a rental agreement with Classic Immo Kft., and Rogán’s neighbor and deputy mayor, András Puskás, who initiated the sale of the property for HUF 52.4 million at the subsequent city council meeting.

Blikk points out that the sale of the property was entrusted to Zoltán Sélley, the head of the district asset management office who subsequently replaced Rónaszéki as district notary after the latter was fired in September 2013 without explanation.

In April 2014 Sélley called attention to himself by showing up to a district council meeting wearing a pair of shoes costing just under EUR 1000.

The “friendly sale” of the 212 sqm property appears not to have been an isolated incident under the mayorship of Antal Rogán.  In 2010 a package of seven properties was sold at substantially below market value for HUF 2.7 billion to a Luxembourg-based company.  At the time the district refused to disclose the name of the buyer.

One of the seven properties, a former apartment building situated in downtown historic Pest’s Dorottya street, is presently being converted into a 120-room hotel by a company whose majority owner and CEO is Péter Serfőző, brother-in-law to former government spokesman András Giro-Száz, recently appointed to the position of state secretary for communications at the Office of the Prime Minister.  Giró-Száz also has a small indirect ownership interest in the project through his shares in Safe Port Project Kft., a real estate management company also run by Serfőző.

In connection with the Dorotty street property, on Friday the district issued a statement according to which real estate values fell some 30 percent in the wake of the 2008 world financial crisis.

(While this may have been the general case, we do not believe that this was true of real estate situated in the very heart of historic downtown Pest. -ed.)

Rogán served as mayor of Budapest’s exclusive “Lipotváros” from 2006 until October 2014.  Puskás resigned as deputy mayor in June 2014 to take a position with the Hungarian Export Import Bank shortly after it was revealed that Puskás, Rogán and Puskás’ former boss, Minister for National Economy Mihály Varga, all owned luxury flats in District 2’s Pasa Park, the precise size, ownership percentage and/or value of which none had managed to properly report when making their annual declarations of personal assets.

Pasa Park is connected to FHB Zrt. CEO Zoltán Spéder, the apparent mastermind of the nationalization and reprivatization of the Takarekbank, a controlling interest in which Spéder managed to acquire earlier this year through an international tender.  In addition to being the owner of popular daily online news publications index.hu and portfolio.hu, Spéder is the chairman of the board of the company that publishes napi.hu.

Replacing Puskás as deputy mayor was former Fidesz district city council member Péter Szentgyörgyvölgyi, who was subsequently elected district mayor in October despite revelations that he was renting a 110-sqm flat from the district for a mere HUF 65,000 (USD 380) a month.