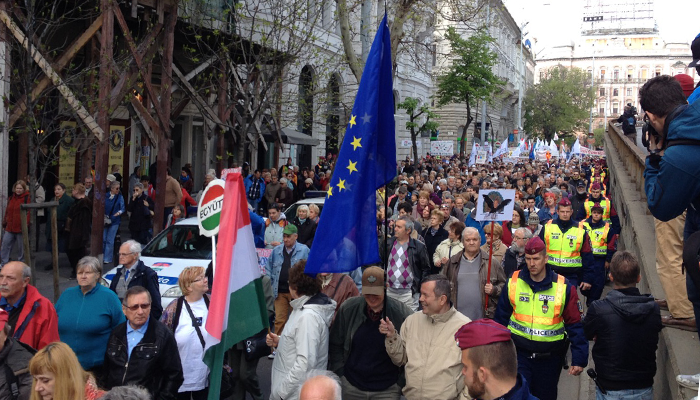 Anti-corruption protests took place across Hungary today.  In Budapest the demonstration started in front of the Eiffel Palace Office Building near the Nyugati (western) train station.  A few minutes before the scheduled start of the protest it seemed as though police and members of the press would outnumber the protesters.  Even though the organizers of the protest had asked the demonstrators not to display party affiliation, a number of Together and Democratic Coalition (DK) flags were seen in the crowd. 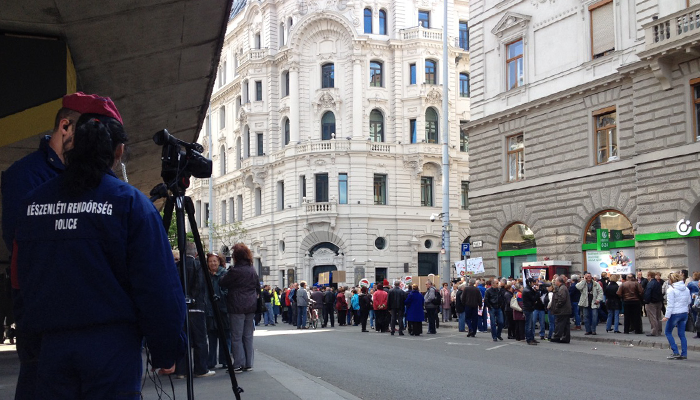 The demonstation started a quarter of an hour late, by which time the crowd had grown to the size of several hundred, and by the time protestors arrived at Szabadság Square, their ranks had swollen to well over a thousand.

The first speaker was Dr. Tamás Lattmann, one of the authors of the 19 referendum questions submitted by civil opposition leaders in March.  He said that one of the most important results of the past few months was that the National Election Committee had accepted the question whether the declaration of assets of politicians’ family members should be made public or not. 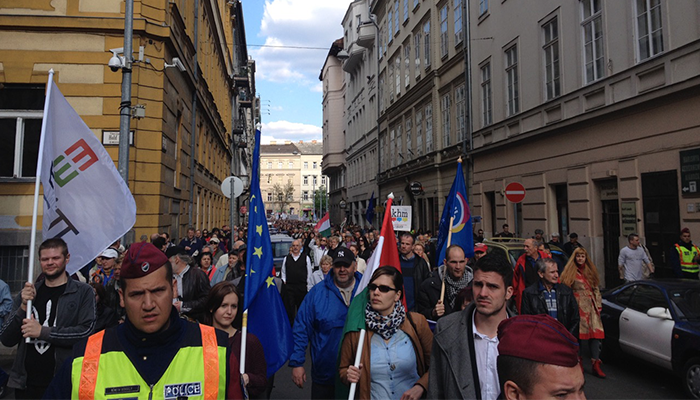 Lattmann believes that “the power-drunk politicians” are overconfident and will only realize what is going on when the prosecutor who isn’t doing his job is reading them their rights, referring to chief prosecutor Péter Polt.  He said this was why it was necessary to compel the government to support the efforts of the European Commission to create a European prosecutor’s office.

He was followed by Dr. Éva Ivanics, a former high-ranking officer in the financial police, who told the crowd that there was corruption before Prime Minister Viktor Orbán, and that he himself had demanded an end to it, and that “we still demand it.”  Ivanics believes Minister János Lázár used public funds to pay for his trip to Paris with a secret acquaintance, while at the same time the “hard-working little person” would get three years for doing the same. 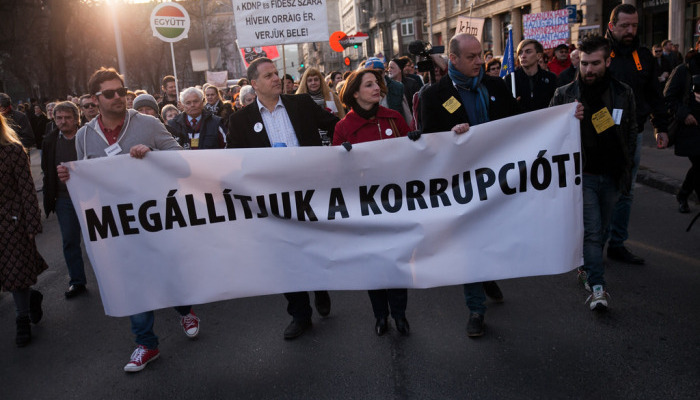 The “small people” today in Hungary leave nothing to their children but poverty and debt, while the “big people” don’t even know how many tens of millions of forints they have given their children in creating their “dream home”, said Ivanics.

After this point some member of the crowd started chanting “Orbán scram” and “dirty Fidesz,” but most quietly began marching towards the Hungarian National Bank (MNB) building in the Szabadság Square.

There journalist Márton Kozák took the stage.  He told the crowd that all Orbán and his people were interested in was how much money flowed into their pockets.  He said that they destroyed the organizations exercising control over the operation of the state, impoverished the independent media, and nationalized the state media in the interest of enriching themselves.

Kozák said the result of all of this was that Hungary ranks higher and higher on the corruption list, and lower and lower on the free press list. He said journalists performing their work according to professional standards posed the greatest threat to “The National Cooperation System (NER)”.  He said the reason control of the media was important to the authorities was that “in order to steal our eyes it first had to rob us of our sight”.  It was only possible to engage in corruption if “dark deeds remain in the dark.  This is what Orbán did with the media” said Kozák.

He believes Orbán, the “half Asian go-getter”, is no longer concerned with appearances when he “builds a narrow gauge railway and a boating lake next to his stadium in Felcsút from the money of European citizens.”  He said the past three by-elections have shown that the majority of the people have had enough of Fidesz.  However, there are more and more that “want to drive out the devil with Belzebub”, referring to Jobbik’s victory in last Sunday’s by-election in Tapolca.  “If we don’t listen to Belzebub, but complete the not easy work of learning, then we will have good work”, says Kozák, who believes “freedom of the press, responsibility to one another, free competition, the proportional electoral system, capitalism, and more money for education” should be the slogans of the civil opposition.

Kozák was followed by Máta Lencsés.  The Hungarian Solidarity Movement believes the govenrment wants to sap everything without mercy to anyone.  The first victims were the most vulnerable and least able to defend its interests, the invalids, followed by the homeless, state defense workers, the Roma, teachers, unemployed, doctors and public workers.  But that wasn’t enough, because they needed newer and newer enemies, believes Lencsés.   In this way the brokers became enemies as well, but not just the broker and not every broker is a criminal.  It’s easy to struggle against a non-existent enemy created.

Bertram Marek, the organizer of the event, was the last to speak.  The university student and activist gave a short speech near the controversial memorial to the victims of the German invasion of 1944.

“We are standing before a memento to incompenance and conspicuous consumption,” said the student activist, who told the crowd that Fidesz party members stand above the law and enjoy the support of prosecutors.  “In the meantime” said Marek,  “governance is about nothing other than stealing European Union and state money.”  At this point the crowd started chanting “thieving Fidesz”. Marek continued by saying that “the government has failed not only morally, but politically”.

With regard to the Quaestor affair, Betram said “we demand the responsible parties be forced to stand before a court of law, because “we cannot allow them to get away with this scandal.”  The crowd echoed Betram’s sentiments, shouting “we won’t allow it.”  To the visible dismay of protestors sporting democratic opposition flags, Betram said the Quaestor scandal proved that the democratic left-wing is also incompetent, and that for this reason an acceptable answer from them would be “if tomorrow they resigned their mandates.”

In connection with Tapolca, Betrqam said that  “Fidesz and the left wing demolition derby have played the country into the hands of a new Arrow Cross bluff party.”  He closed his speech by saying that the situation boils down to one of “historical responsibility” and that for this reason the political opposition needs to adopt a new quality.  He announced that they were awaiting protestors next Sunday at the same time in the Józef Nádor square.