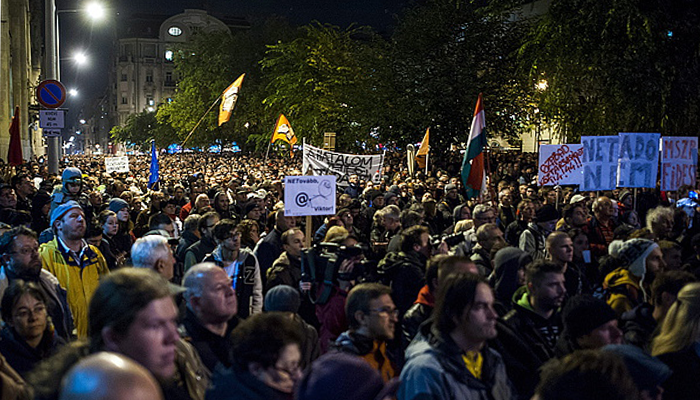 Another round of anti-corruption protests is scheduled to take place in the Hungarian capital of Budapest and the northern city of Miskolc.

Some seven thousand are expected to attend the “It’s our country! It’s our money!” demonstration scheduled to take place in front of parliament this evening.  After hearing speeches from event organizers Eszter Somló and Ottó Farkas, protesters will march across the Chain Bridge to the Castle District where former LMP MP-turned-civil activist Gábor Vágó, András Szabó, Zsolt Szegfalvi of Greenpeace and Tibor Karancsi of the Alliance Against Corruption are scheduled to speak.

Only a hundred or so individuals have RSVP-ed the “Miskolc has a voice” demonstration to be held in its Heroes square.

According to the organizer of the Budapest demonstration, despite tens of thousands having taken to the streets over the past weeks in protest of systemic abuse of power, the National Tax and Customs Administration (NAV) has yet to be audited and its corrupt directors continue to handle taxpayers’ money.  “The government does everything it can to grow its own group of supporters from public money, from our money.  Private savings are being nationalized and our decisions are being ignored,” according to the organizers.

The organizers of the Miskolc demonstration sent out a brief invitation:

Come and make your voice heard with us.

Four additional protests have been scheduled for this month:

December 6 – Public service and employee unions are organizing a demonstration in the József nádor square.

December 16 – The same group will protest in front of the Ministry for National Economy in the József nádor square.

December 19 – There will be a demonstration of FX loan holders in front of parliament.