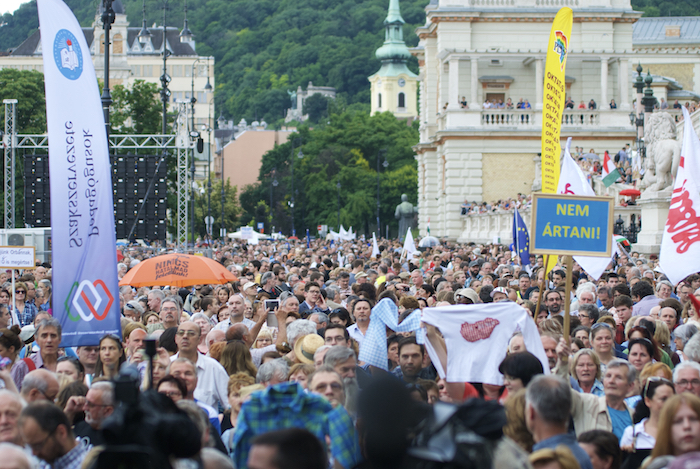 A renewed wave of demonstrations is planned for this weekend in cities and towns across Hungary, including in Prime Minister Viktor Orbán’s hometown of Felcsút.

Two groups that earlier organized major anti-government protests in Budapest have joined together in calling for another demonstration Sunday in the capital.

Facebook groups Nem Maradunk Csendben! and Oktatási Szabadságot! planned the protest, called Nem adjuk a jövőnk, itt maradunk (We won’t give up our future, we’re staying here!). The demonstration will begin at the Műegyetem rakpart, along the Danube in Buda, and a march to Kossuth square outside Parliament will follow.

According to the demonstration’s Facebook page, the protest is in opposition to the government’s legislative actions against civil society and the media, as well as the adversarial posture Hungary has recently taken toward the European Union.

“We cannot be silent! The Lex CEU [Central European University], the law against civil society, the campaign against the EU, the war on the remnants of the free media, the advertising tax, and so on: in the past few months, the Hungarian government has waged war on the few independent institutions left in this country, and at the same time, waged war on our future,” a statement on the Facebook page reads.

The organizers urged people to attend the protest to show that they wish to remain in Hungary, and for Hungary to remain within the EU.

As of Friday afternoon, parallel protests had been organized in Szeged, Gyöngyös, Veszprém, Békéscsaba, Debrecen, Nagykata, Kaposvár, Sopron, Pécs and Hódmezővásárhely. Organizing in other towns and cities was reportedly still under way as of Friday.

Another protest has been called in Orbán’s hometown of Felcsút for Saturday. The demonstration, “Let’s Stop Felcsút!”, was called by former Politics Can Be Different (LMP) MP Gábor Vágó and will focus on corruption surrounding Orbán and his friend and Felcsút mayor Lőrinc Mészáros.

A referendum question submitted by Vágó was accepted by the National Election Commission early this month that could lead to a referendum on whether the statute of limitations for criminal corruption cases should be extended to 12 years.

According to Vágó, “this protest in May will be the start of the anti-corruption referendum campaign, and the beginning of the end of the public funds drain of Felcsút.”

Organizers have rented buses to transport demonstrators from around the country to Felcsút, about 40 kilometers from Budapest.

An earlier version of this story stated that Együtt (Together) chairman Péter Juhász had called for parallel protests in other cities and towns. That statement was in error. Juhász made no such call, but local organizers, including Együtt organizers, have independently organized protests in numerous towns across Hungary.