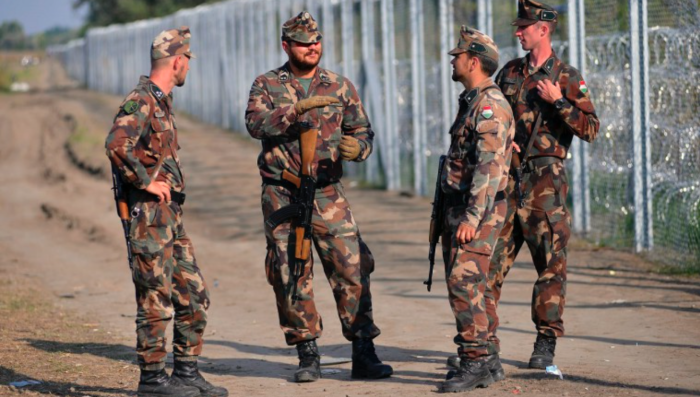 Armed Hungarian soldiers have been spotted guarding the fence along the Serbian border even though the army is presently only authorized to erect a controversial 175-kilometer fence, reports 444.hu.

The soldiers can be seen with police in a video taken by Reuters on Saturday.

Last week the government attempted to modify the army law in order to be able to deploy the army during a state of emergency caused by large-scale migration, but was unable to muster the four-fifths parliamentary majority necessary to fast-track the law.  For this reason, the law can only go before parliament next week.

A Socialist member of the parliamentary committee on defense, Tamás Harangozó, reportedly asked Hungary’s new Minister of Defense on Saturday what the basis for deploying armed soldiers along Hungary’s southern border was.  444.hu reports that as of Monday afternoon he had yet to receive an answer.

Until such time the army law is modified, Harangozó says the government may attempt to explain the presence of armed soldiers along the border by claiming they are either protecting fellow soldiers or part of a NATO exercise presently under way at various points in Hungary, but this would be a clear case of “mixing things up”.

Harangozó says Defence Minister István Simicskó observed both military exercises and the fence being erected on the border last week, and mixed up the two things in an official statement.  (The statement was subsequently removed from the government’s website).

The Socialist MP says that, in theory, soldiers can be deployed to guard military exercises but they are not permitted to deal with refugees coming over the fence.

According to Harangozó, the pending law makes it possible for soldiers to help the police defend the border without clarifying who is in charge.  Each body has its own chain of command, and it is not clear what the hierarchy will be between police and military leaders, writes 444.hu.

Another problem, according to the MP, is the “chasm” between regulations governing the use of firearms and the political pronouncements.

Whereas police may exercise discretion when it comes to using firearms, the defense law obliges soldiers charged with guarding an object to use their weapons if there is no other way to defend it.   Harangozó says that for this reason it is disingenuous of governing politicians to say that soldiers deployed to protect the fence and keep refugees at bay will not shoot, because current law requires them to do so.   Furthermore, in theory any soldier failing to use his firearm to defend an object can be court-martialled.