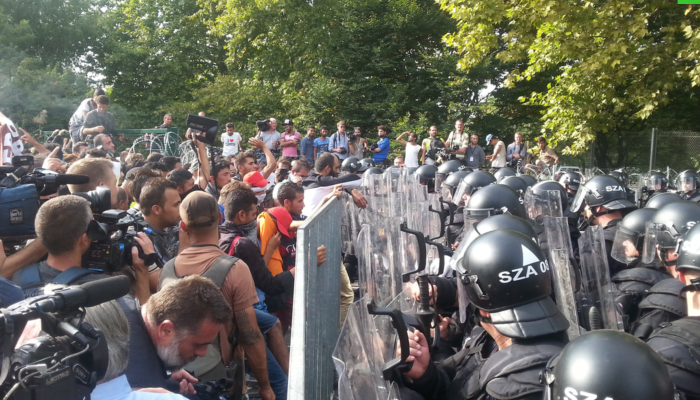 NOTE: In light of today’s revelations that it was the Hungarian police who attacked refugees after opening the gate and admitting them to Hungary, the Budapest Beacon hereby modifies the following story (see italics).

A phalanx of Hungarian police forcibly contained asylum seekers after they broke through the fence at the so-called Röszke 2 border crossing Wednesday afternoon, announced the Communications Service of the National Police Magistrate’s office.

Prior to that police beat a group of peaceful refugees entering Hungary after police opened the border crossing gate, according to numerous eyewitness reports.

A video of a group of young asylum seekers forcibly opening the gate while Hungarian riot police spray them with tear gas can be viewed here.

This reportedly took place AFTER police beat refugees and drove them back behind the gate, which they then secured.

According to the statement, a crowd of asylum seekers became agitated at around 2:30 pm and began throwing stones, pieces of wood, and bottles at police on the Hungarian side of the fence just before knocking the fence over.

If eyewitness accounts are to be believed, the statement of the Hungarian police is inaccurate.

A phalanx of riot police reportedly moved in to prevent asylum seekers from entering Hungary.  The only details provided are that “the police acted in a manner that was lawful and proportionate in the interest of protecting the Hungarian and state border and the European Union’s external border.”

There does not seem to have been anything proportionate about the action. 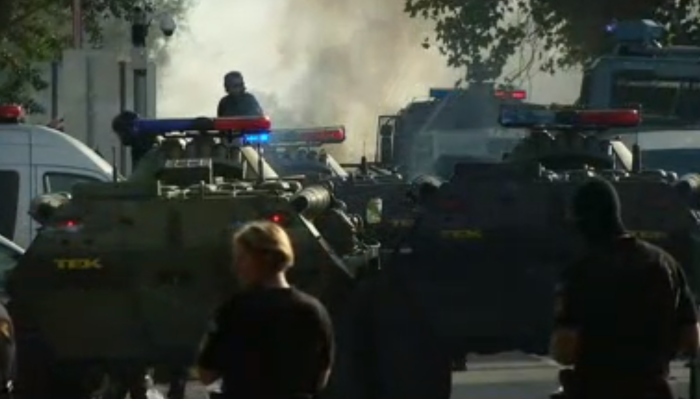 However, live feeds from both sides of the border show that crack Hungarian counter-terrorism units have been deployed along with armored personnel carriers. 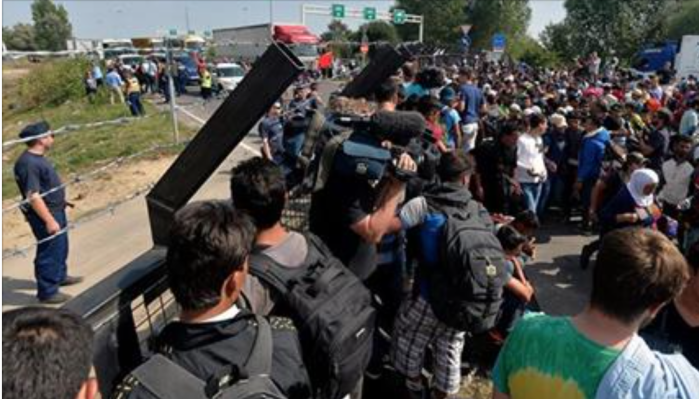 Earlier Hungarian police used tear gas at the so-called Röszke 2 border crossing (pictured) when a group of migrants tried to break through a gate blocking off the road.  Apparently, among the affected asylum seekers were children, seen here being carried away.

It now appears the police attack on refugees was unprovoked. 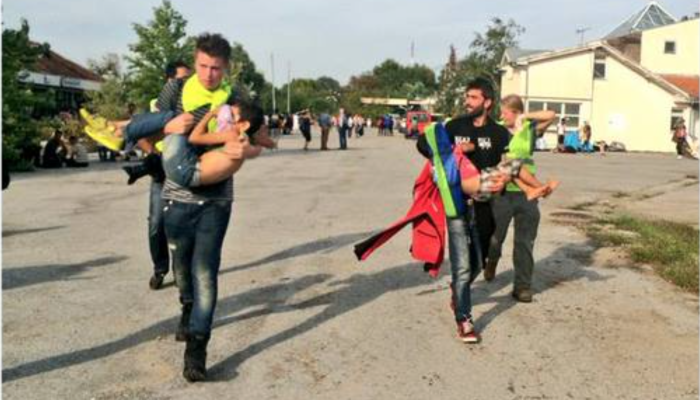 Propeller.hu reports that a group of several hundred migrants left from the new Horgos-Röszke border crossing to the old one because they were told that the latter would be opened.   In their rush to get there many of them abandoned packages, tents, food, and water.

Over the course of the afternoon the various size groups of migrants chanted and whistled at police guarding the Serbian-Hungarian border.  However, according to the Hungarian State Press (MTI) there was no attempt to cross the fence illegally.

Earlier atv.hu announced that a group of asylum seekers had threatened to dismantle the fence at the old Route 5 border crossing if the gate was not opened by 1 pm.