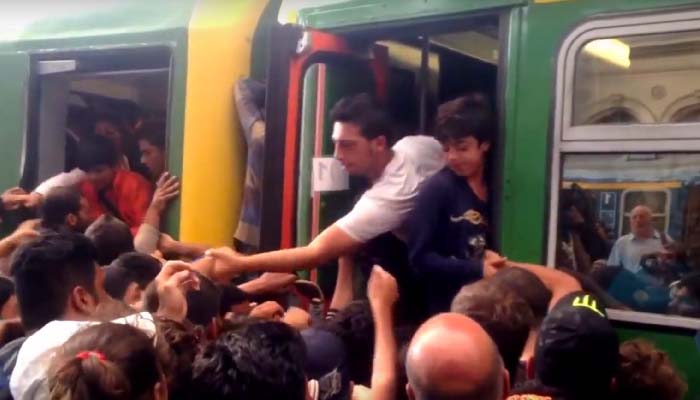 Budapest police suddenly dropped their cordon around the entry to Budapest’s Keleti train station Thursday morning. Thousands of asylum seekers camped out around the building took the departing police officers as a sign that they, too, would finally be able to leave Hungary.

The station had been cordoned off by police since Tuesday in an effort to stop the asylum seekers from boarding trains bound for western Europe.

For days the huge police presence, coupled with thousands of obviously upset asylum seekers, did much to create an atmosphere of high tension. The tension could be felt around the world as reporters from a number of leading international news outlets provided live coverage of the Hungarian government’s unconscionable treatment of the people stranded inside the country.  Sources told the Beacon that an attempt to distribute donated food to the refugees had to be abandoned because the police would not permit the donor access to the Keleti station transit zone.

When the police quietly left the train station Thursday morning, thousands of asylum seekers flooded it  in a last-ditch effort to jump on a train and finally leave Hungary for western Europe.

It was at this time that Hungary’s state-owned railway company released a statement in Hungarian to state-owned media in which they announced that no trains bound for other countries would be leaving Hungary.

The asylum seekers, of course, had no idea this press release had been issued, and neither the police nor train station officials contacted local volunteers to inform them what was happening.

Presuming they were now permitted to leave for Germany via Austria, the asylum seekers stormed the station and boarded a train in the hope that they, too, would be able to leave Hungary just as other asylum seekers had done only days ago.

Hungarian news site 444.hu reported the scene as chaotic, and their reporter Bence Horváth posted this video as proof.

444.hu reported that only one train actually left Keleti station today. The train appeared to be bound for the city of Sopron in far western Hungary but stopped in the town of Bicske near Budapest, where 100 police were waiting for its arrival at the station.

Hungary’s state-run media reported the asylum seekers were taken off the train and moved to buses en route to the Bicske refugee camp.

444.hu’s Gergő Plankó reported that around 100 asylum seekers stepped off the train and, upon seeing the police, started chanting, “No camp! No camp! Germany! Germany!”