At Hungary’s Office of the Prime Minister, charity begins at home! 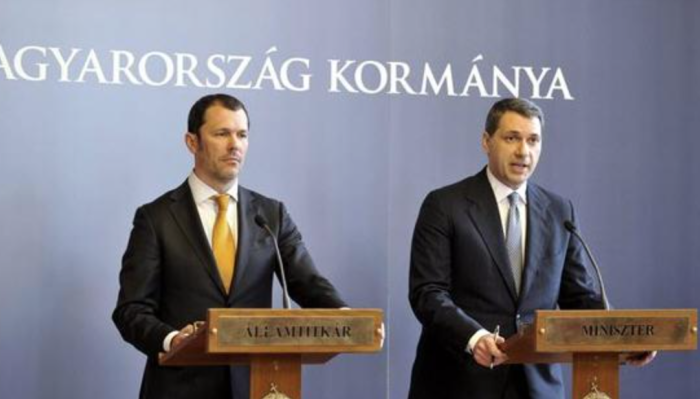 Strategopolis Kft., a company founded by András Giró-Szász,  state secretary for communications for the Office of the Prime Minister (pictured left), has won a contract to supply his employer with HUF 140 million (USD 500,000) of “studies” over three months.

Strategopolis Kft. reportedly beat out thirteen other companies, including Deloitte, KPMG and even government favorite Századvég, to win all three tenders issued by the Office of the Prime Minister to conduct studies about (1) the information society, (2) the compatibility of government goals with development policies, and (3) methods for improving the effectiveness of the way in which calls for tenders are written.  This was not difficult as all but one of the competing bids were reportedly disqualified.

The alleged purpose of the studies is to furnish the Minister in charge of the Office of the Prime Minister, János Lázár (pictured right), with vital information about the 2007-2013 EU development grant funding period.   Not clear at this time is why such a task should be entrusted to a company founded and owned on at least two prior occasions by the state secretary for communications when the company’s founder is a full-time ministry employee.

In response to index.hu’s request for clarification as to the reason why all but one of the competitors’  bids were disqualified, the Office of the Prime Minister offered the following written explanation:

“The other applicants did not satisfy the requirements of the public tender with regard to documentation and failed to meet the conditions defined by the laws.  The Office of the Prime Minister sent all of the bidders a request for missing documents and information on May 27th, 2015.  However, the other bidders either failed to fulfill the request by the deadline, or, even after submitting the documents, failed to demonstrate their suitability.”

Daily online publication napi.hu points out that Strategopolis’ turnover has continuously grown over the past several years.  According to ceginfo.hu the company’s gross revenue increased 50 percent in 2014 to HUF 666 million (USD 2.65 million).  Of this, HUF 271 million (USD 1.1 million) was paid out in dividends.  The previous year the company paid dividends of HUF 127 million (USD 500,000) after revenues of HUF 433 million (USD 1.7 million).

The vast majority of Strategopolis’ income is generated by contracts concluded with national and local governments.

Having divested himself of his 61 percent ownership interest in Strategopolis Kft. when becoming government spokesperson in September 2011, Giró-Szász reportedly re-acquired his shares after leaving government in April 2014, only to sell them again when joining the Office of the Prime Minister in November 2014.

This is not the first time Giró-Szász’ relationship with his employer has raised eyebrows. Last year Lázár’s ten-year-old son somehow managed to acquire a luxury flat in Budapest previously owned by Giró-Szász, whose various companies have furnished the Office of the Prime Minister (and other government- and Fidesz-related organizations) with hundreds of millions of forints worth of “studies” over the past few years.