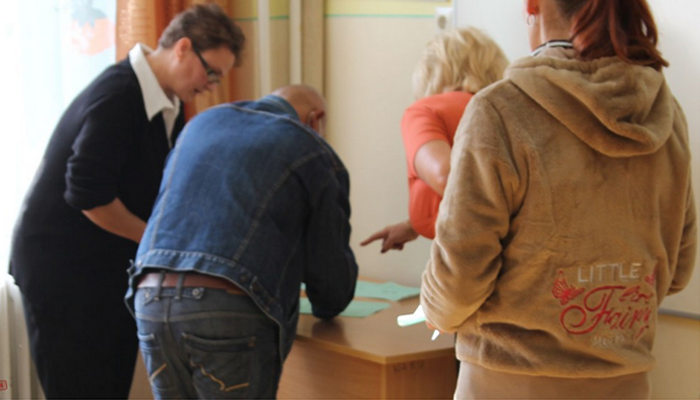 We have discovered traces of an unusual method for checking votes in (Sunday’s) local election in the settlement of Forró in Borsod County.  In place of legendary “chain voting” or a more modern telephone ballot presentations they simply made the vote open in the case of many thousands of people.  Some are protesting against the decade-old practice.

According to Atlatszo’s sources, in settlements throughout the country in recent weeks there was a change in practice: public workers did not actually work.  “They start work at 7:30 am, and by 8:30 am everybody’s at home,” according to numerous sources in many settlements.  But those who are out (working) are also rather sitting around.

Next to Forró’s main street (Fő utca) layers of putrid human waste stand in the storm drain despite the fact that according to the National Employment Service 190 public workers worked in the settlement in September.  As the Forró example also shows, in those settlements where Roma voters make up the majority, the mayors seek their favor.  True, there are certain expectations but these are not related to work.

The model is not too complicated: where the Roma make up a majority of the inhabitants, the person they vote for will be mayor.  These settlements are typically situated in the poorest regions of the country, where apart from the HUF 22,000 (USD 95) a month in public support, public work is the only source of income.  Generally, the operations of the local government is a mere formality.  But if the mayor entrusts the decision whom to employ in public work to the head of the local minority government, then the local Roma leader becomes the de facto leader of the settlement.

Over the course of four years (the Roma minority leader) deals with the Roma problems, the mayor sanctifies his decisions.  The local Roma head at the time of elections relays the mayor’s intention:  those Roma who vote properly can get work for the next four years, welfare, extraordinary support, etc.  In fact, only those get work, etc., who vote appropriately.  It is easy to see how every member of the local establishment benefits from this unique division of labor.

The law governing elections does not require that voting take place in a voting booth.  Whoever wants to may vote outside the booth as well.  For example, on a table that happens to be at the polling station.  Next to it stands the organization nominated by the mayor and the delegate from the minority local government.  The mere fact that these actors are present exerts a strong influence over the voters.

However, the practice is that, in addition to the “soft” inspection, the voters show the ballots to the delegate, often without being told.  Anyone not voting outside of the voting booth is very conspicuous:  many ask for help from the committee because either they cannot see well or are illiterate.  They do this despite using their driving licenses to verify their identities.  In such cases either the delegate of the local power network or the delegate of the minority government enters the voting booth with them and helps them fill in the ballot.

Modern times complicate the functioning of such a system in the settlements but do not obstruct it:  the presiding Roma leaders loudly proclaim on the day of the election that nobody should be afraid because the law does not prohibit open voting.  In the polling stations the voters showed the filled-in ballots to the appropriate delegate in plain view of us.