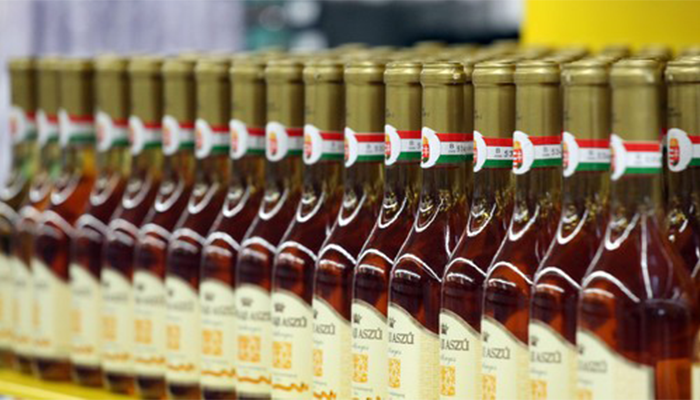 250,000 bottles of Tokaj wine reported sold to US wholesaler Costco have been collecting dust in a California warehouse according to Hungarian police.

Earlier this week the Hungarian state-owned producer of Tokaj wine, Tokaj Kereskedőház Zrt. (Tokaj Zrt.), announced it was suspending the shipment of Tokaj wine produced before 2013 pending the outcome of a “detailed investigation” into “irregularities uncovered over the course of an internal audit” with regard to the “production and handling” of wine. According to a company statement, a large number of bottles produced before 2013 appear to have been mislabeled and contain something other than what appears on the label.

The company issued the statement after Hungarian police obtained a copy of an internal audit while investigating allegations of fraud brought by its US distributor.  Tokaj Zrt., in turn, has accused its US distributor of acting in bad faith.

Among the tainted wine are several hundred thousand bottles shipped to the United States in 2010 which, according to Hungarian police, have been collecting dust in a California warehouse.

According to nol.hu, in 2010 Tokaj Zrt. shipped two hundred and fifty thousand bottles of Tokaj wine to the United States after signing a contract with Vinum Tokaj International LLC (Vinum LLC), a California-based distributor owned by a Hungarian of Transylvanian origin, Attila Balla. The contract granted Balla’s company exclusive rights for the distribution of wine in the United States produced by Tokaj Zrt.

Previously Tokaj Zrt. managing director István Kiss had claimed that the wine was being sold through American wholesaler Costco and that “it was thanks to this that 250,000 bottles of wine had appeared on the North-American market”.  He claimed “the delivery and sale of wine is continuous” and would result in “opening new markets for Tokaj wine on the American continent.”

Nol.hu reports that an investigation by Hungarian law enforcement officials revealed that the vast majority of bottles shipped to the United States were never actually sold to Costco but rather to the owner of the warehouse where they are being stored somewhere in California.

According to the California Department of Alcoholic Beverage Control’s website, Balla’s company was issued three licenses to conduct alcohol-related business activities in California in September 2010: one to import beer and wine, one to act as a wholesaler of beer and wine, and one to sell beer and wine over the internet. The licenses are due to expire at the end of August 2014.

It is not known whether Vinum LLC obtained the licenses before or after contracting with Tokaj Zrt. Nor is it known what experience, if any, Balla’s company had importing and distributing wine in the United States prior to becoming Tokaj Zrt.’s exclusive US distributor.  Vinum Tokaj International, which has the exclusive right to market Tokaj Zrt.’s wines in Canada, opened a Tokaj wine boutique restaurant in Vaughan, Ontario, Canada last year.  The boutique restaurant was to serve as a “House of Hungarian Wines” offering the products of ten renown Hungarian wineries.  At the time of its grand opening there was talk of plans to open similar restaurants in New York and Los Angeles.

Nol.hu reports that according to the contract, in addition to paying for transportation and warehousing, Tokaj Zrt. was contractually bound to contribute USD 20,000 a month towards the cost of marketing the wine. Nol.hu writes this is a rather unusual arrangement in the wine business.  What is not clear is whether Balla’s firm ever paid for the wine.

Furthermore, the US distributor was to sell the inventory within one year of receiving the shipment. According to nol.hu, the wine did not end up on the shelves of US wine retailers but was sold to the owner of the warehouse in which the wine is being stored (an unusual arrangement in any business).  Unknown at this time is whether the owner of the warehouse paid Balla for the wine.

Nol.hu reports that, despite the distributor’s failure to distribute the wine, the contract was extended for another year after Balla managed to convince the state-owned company to send an additional 500 thousand bottles.  However, before the wine could be shipped, Tokaj Zrt. terminated the contract in 2012, claiming it was unwilling to assume the risk of transporting half a million bottles of wine to California.

The cancellation of the contract prompted Balla to file a civil lawsuit against the state-owned producer of Tokaj wines. The timing of the lawsuit is good because the quality of the wine has since been called into question.

If the quality of wine previously shipped to Balla’s company proves to be questionable, the US distributor may have grounds to sue Tokaj for the sale of fraudulent goods. The distributor may argue that the compromised quality of the wine is the reason why he failed to distribute it in the first place.  However, Balla has yet to offer any explanation as to why American wine retailers never purchased any Tokaj wines from his company.

All of which begs the following question: if the distributor knew that retailers weren’t buying Tokaji because the label was misleading, why did the distributor extend the contract with Tokaji Zrt. and order an additional 500 thousand bottles?

The discrepancies may indicate more significant problems for Hungary’s state-owned wine company and the government agency responsible for regulating the wine industry.

The Tokaj brand name is protected by the government. The Tokaj wine region is designated as a protected area for its significant cultural heritage. The fact that the practices and standards employed by the government agency responsible for regulating the quality of Tokaj wines has been called into question is a potentially serious problem for Tokaj wine producers, public and private alike, and may threaten the livelihood of thousands of families cultivating grapes in this economically depressed part of Hungary.

Correction: An earlier version of this article incorrectly stated that the original shipment of 250,000 bottles was never sold.  According to the nol.hu article they were sold to the owner of the warehouse where they are currently being stored.