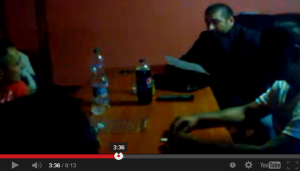 On Friday afternoon Hungarian weekly economical newspaper HVG released an amateur video as proof that Fidesz had cheated in last Sunday’s by-election.  In the video a man who arrives to a meeting in a leather jacket tells three men to offer families money and firewood to vote for the Fidesz candidate for city council.

Coming from Hungary’s leading weekly news magazine, the article was immediately picked up and reported by other news outlets, including the Budapest Beacon.

The authenticity of the Baja amateur video has since been called into question.  Of the four men appearing in the video, it seems only the man in the leather jacket is a Baja resident.

According to editor-in-chief, Gábor Gavra, HVG did not pay for the video and believed it to be genuine.  However, in a telephone interview with  444.hu he acknowledged making a “serious professional mistake when giving the article presenting the video a title and lead which the recording itself does not support.”

Pro-government news outlets report today that “a police examination confirms the video to be a fake or manipulated” but the police have yet to issue a formal statement.

We will keep our readers advised as this story develops.

Referenced in this article