“We should oppress manifestations of hatred against ethnic communities,” Minister of Human Resources Zoltán Balog emphasized in his speech delivered at the 70th anniversary of the liberation of Auschwitz concentration and death camp on Tuesday. Balog added that “Auschwitz can never happen again.” The Hungarian minister accompanied an official delegation of the Hungarian Federation of Jewish Communities (Mazsihisz) and civil organization “March of the Living” to visit the concentration camp memorial, and pay their respects. They joined German President Joachim Gauck, French President Francois Hollande and Ukrainian President Petro Poroshenko at the event.

Hungarian Prime Minister Viktor Orbán did not attend the Auschwitz commemoration alongside other leaders, even though nearly every third victim of the Nazi death factory arrived there after the Hungarian Holocaust commenced in May 1944. Out of the estimated 1.5 million mostly Jewish people murdered at Auschwitz an estimated 400,000 were Hungarians. 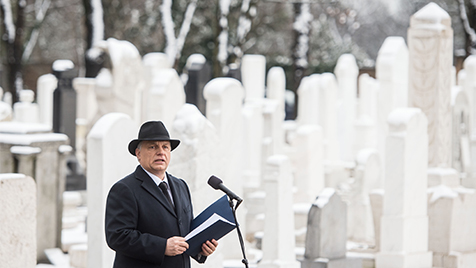 A day before the international commemorations, however, Orbán gave a speech at Budapest’s Kozma utca Jewish Cemetery at an official event honoring fallen Jewish Hungarian soldiers of the First World War. He was accompanied by Mazsihisz president András Heisler. The gravestones of the Jewish soldiers have recently been renovated using government funding. Orbán reminded his audience that “the sacrifice of the Jewish soldiers was crucial in the Austro-Hungarian war effort”, adding that the fallen soldiers are Hungary’s “unquestionable heroes.”

“Only two and a half decades later, we were heartless and indifferent when we were supposed to help them, as many and more Hungarians then chose the path of shame instead of the path of honor,” he said.  His remark, even though it admits to a hostile, or indifferent, attitude that resulted in mass-murder, was still avoiding the issue of state responsibility. 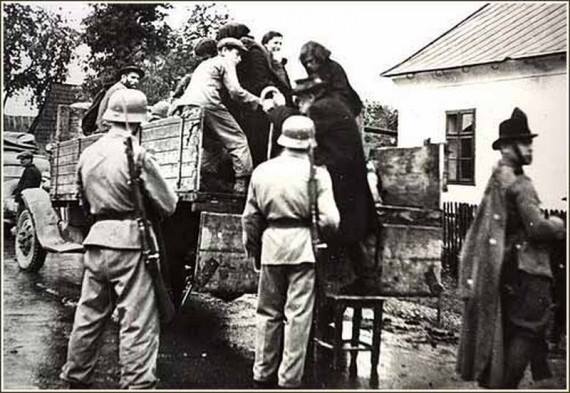 Orbán also announced that he will initiate the setup of an online database that will “preserve the names of these heroes.”

January 26, 2015 marked the hundredth anniversary of the battle at Uzsok-straits, a large-scale and successful military offensive of Austria-Hungary and Imperial Germany against Russia. The campaign led to the Gorlice breakthrough in May 1915 that routed the Tsarist Russian army further inside Ukraine. A significant number of both German and Austro-Hungarian Army soldiers were Jewish, often volunteering for service.

The Kingdom of Hungary alone lost some 560,000 soldiers on the battlefield until 1918.

Recent gestures by government figures towards the Hungarian Jewish community come on the heels of a long and troubled year.   Hungary’s Jewish community strongly objected to the erection in the Szabadság square of the so-called “Memorial to the Victims of the German Occupation,” which many interpreted as an attempt to shift the blame from the Hungarian authorities to Nazi Germany for the deportation and murder of two-thirds of Hungary’s pre-war Jewish population.  The erection of the monument caused Mazsihisz and its president András Heisler to boycott Hungary’s official Holocaust year events and funding.

Commenting on these conflicts, Heisler earlier told the Beacon that, despite many differences and a moral standpoint they have taken against the monument, they have agreed with János Lázár, Minister of the Prime Minister’s Office, that “Renovation of an Orthodox Jewish old-age home and taking care of abandoned Jewish cemeteries are also on the agenda.”