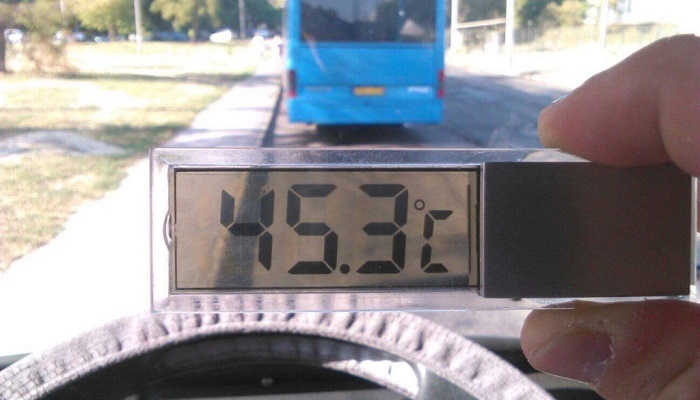 Budapest Transportation Company (BKV) says it is not attempting to track down the bus driver who released a photo to online media showing a thermometer reading 45.3 degrees C (113 F) in the cabin of his BKV bus, hvg.hu reports.

Left-wing daily newspaper Népszava first reported that BKV was sending buses with malfunctioning electrical systems onto their routes, and instructing drivers who experienced broken air-conditioning or hot air blowing into the cabins to “open the windows”. Népszava later reported that BKV was trying to find which driver had publicized the 45 C photo, a temperature the Domestic Public Transportation Workers Union president István Szabó called “unacceptable”.

On Friday, BKV said it had, in fact, tried to find out which bus had gotten so hot, because “it concerned one of our new types of buses, and in the interest of correcting the problem, we feel it is our duty to look into which specific vehicle experienced the problem”.

Budapest Transportation Company argues that the driver did not attempt to inform the company’s technical services division but rather sent the photograph straight to the media, an action that “did not focus on solving the problem”.