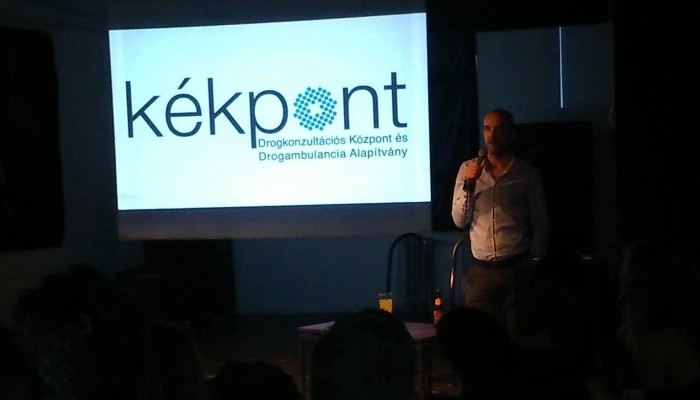 HIV infection has reared its head in Budapest’s 8th district, but the district will close the needle and syringe exchange program intended to prevent the spread of infection in September.  Since 2006 the Blue Point (Kék Pont) Foundation has been the country’s largest harm-reduction center, supplying needles to around 3000 clients in the interest of preventing the spread of AIDS and hepatitis.  The foundation will continue to work only if the state increases its annual support from HUF 6 million (USD 26,000) to HUF 30 million (USD 135,000).  However, there is little chance of this happening, given its stormy relationship with the local government,

According to National Focal Point data from 2012, Blue Point’s central offices serviced 35% of the country’s needle exchange clients.  The number of clients has been increasing continuously since January, with an average of 123 drug users seeking its services daily.  But there are days when as many as 160-170 people show up over a four-hour period.  This is largely due to the fact that most of the drugs requiring needles are designer drugs used ten or even 15 times a day for which more and more sterile needles are required.

In the autumn of 2013 the 8th district local government terminated the contract signed with Blue Point in 2010.  According to the local government “despite foundation promises the number of drug users has increased, and along with the drug users more and more drug dealers have appeared in the district”.  (We wanted to ask the 8th district government what the basis for this statement was and pose other questions.  They promised to answer our questions after the summer vacation in two weeks time.  Once we receive them, we will share them with our readers.)

Hungarian Civil Liberties Union drug policy program director Peter Sarosi believes that the success of a needle-exchange program must be assessed in several ways.  “The program serves several goals at the same time.  The prevention of hepatitis and HIV infection through the distribution of sterile syringes and needles is only one of them.  But in addition to this, it is important to see that this connects users with the system of drug-user support which is a springboard for treatment.  Many accuse needle exchange of bringing drug use to the district, whereas the cause and effect relationship is the opposite.  In 2006 needle-exchange buses operated in Budapest.  Blue Point moved to the 8th district because they were experiencing much more drug use here than elsewhere,” he said.

Needle exchange can only work properly if the center can provide enough sterile syringes.  According to Sarosi financial support for needle exchange decreased significantly after 2010 and Blue Point had no choice but to let a number of employees go.  (Blue Point does not receive any support from the local government.  It receives HUF 6 million (USD 26,000) in support from the state.  According to their statement this does not cover their operating costs, which were supplemented with private donations but their financial reserves are depleted.  According to their calculations HUF 30 million (USD 135,000) would be necessary to complete their tasks).  The lack of funds has not only impacted the number of employees but hours of operation and the number of needles that can be distributed as well.  “They weren’t able to exchange every syringe returned, and for this reason the users had less and less motivation to return the used needles,” explains Sarosi. “While in 2011 the ratio of needle exchange was 80% (that is for every 10 needles distributed 8 were returned, which is a very good ratio), this has decresed to 40% in 2012-2013.”

The users throw away the needles because if a policemen finds drug paraphernelia on them during an identification check, it counts as criminal evidence and they can be taken into custody.  According to the local government “a number of complaints have arrived from district residents who have encountered discarded, used syringes left by drug users in playgrounds, sandboxes, doorways, stairways, streets, under benches and even kindergarten yards, of which Blue Point acknowledges 80% are infected with hepatitis C.” According to district city council member Orsoly Ferencz, “We have no complaint with a well-operated needle-exchange program. But the 8th district has had enough of the distribution of needles”.

In January a previously unknown civil organization, the Orczy Association, organized a demonstration at which it demanded Blue Point withdraw from the district and accused the foundation’s employees of helping their clients to their death rather than promoting harm reduction.  (Some members of the district Fidesz government also participated and the sound system is said to have been provided by the company of a district city council member.)

Who is responsible for cleaning up?

“Many are using courtyards, doorways, abandoned houses as unofficial shooting galleries in conditions that are not hygienic and cannot be controlled.  Blue Point agreed to collect syringes in these hidden places.  Cleaning public areas is not our responsibility” said Sarosi, adding that even this work had to be undertaken by the foundation with the help of volunteers.  Blue Point also argued that it is not international practice for the harm-reduction program to be responsible for cleaning public areas, as this is done everywhere by specialized, prepared and usually local government or state-owned companies.

The 8th district government, on the other hand, promised HUF 13.5 million to the Ministry for Human Resources for cleaning up used drug waste and hiring people.  “Not long ago we met with the ministry to discuss needle-exchange matters, and they said that the money had arrived but that they did not know on what the local government had spent it.  We are preparing with HCLU to obtain detailed information about this from the local government,” said Sarosi.

Due to opposition in November 2013 the 8th district recommended that the members of the district Drug Matter Discussion Forum (KEF) be replaced.  (These forums were created in 2000 together with the first national drug strategy program in order to coordinate drug-related actions on a local level.  KEF works in every county and large city with the participation of representatives of local health and law enforcement organs).   The previous director of the KEF was Blue Point Foundation chairman Jozsef Racz, and it was under his direction that the area drug strategy plan was worked out which has yet to be adopted.  For this reason the 8th district does not currently have a drug strategy of any kind.

“At the last KEF meeting they threw the drug plan worked out by Blue Point over the course of many years into the garbage,” says Sarosi. “Now KEF has a new president, Eszter Ujhelyi, and the KEF coordinator became Katalin Szomor, who is better known for attending scientology events.  Supposedly it is said that, as anti-drug winds are blowing in the country, there will be a completely new drug strategy in the 8th district, and there will be a crackdown.”

Fidesz city council member Orsoly Ferencz believes KEF will work more effectively because previously civil organizations were not open to communication and cooperation.  The local government believes it will quickly find new organizations to take the place of Blue Point in the work of KEF.

However, Sarosi does not think they will find an organization that can conduct needle exchange in place of Blue Point.  “Presently we are trying to find some solution.  If we can supplement the program, perhaps needle exchange can continue in the form of a bus as before 2006.  Blue Point has been so burnt out in this fight that it is almost certain that it will wind up its needle exchange there and concentrate on the health centers in Budapests 9th and 4th districts.”

According to the Blue Point statement it is once again opening technical discussions with the National Drug Coordinator and will try to arrange for the needle-exchange program to be declared a special program and for the support to be increased to HUF 30 million (USD 135,000).  At the same time it cannot cover the costs necessary to continue operations as the local government increased the rent five-fold in January (from HUF 22,212 (USD 100) to HUF 100,852 (USD 450)).  The program supporters indicated that “they did not want to transfers the higher rent to the local government’s coffers via Blue Point”.

Referenced in the article: