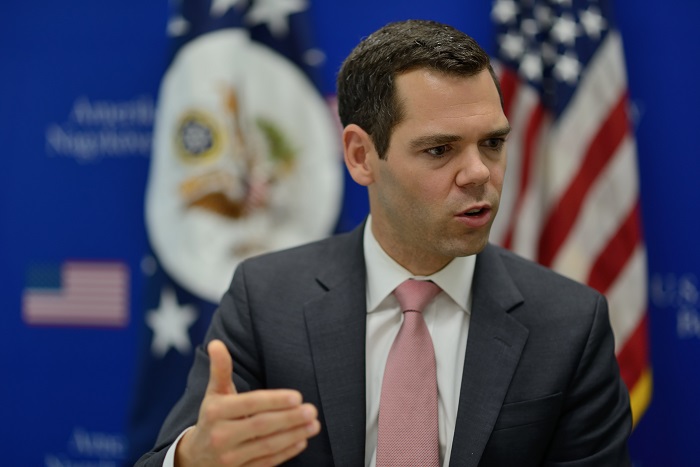 The Budapest Beacon sat down with Rob Berschinski, a senior vice-president at Human Rights First, in his Washington, DC office to discuss American policy toward Hungary in the age of Trump.

Berschinski previously served in the Obama administration as United States Deputy Assistant Secretary of State for Democracy, Human Rights, and Labor. At the State Department, he was responsible for establishing and implementing US policies regarding democracy and fundamental freedoms in 65 countries. Berschinski earlier worked in the Defense Department and National Security Council, and was an intelligence officer in the US Air Force.

Lili Bayer: Human Rights First has been very vocal on the issue of the Central European University in Budapest. How has the amendment to the Hungarian higher education law been perceived here in Washington?

Rob Berschinski: I’ve been pretty enthused with the response from members of both parties. We brought in a group of administrators and students from CEU, and met with representatives of the State Department and members of Congress — the House and Senate — from both sides of the aisle. And universally there’s great sympathy for CEU’s plight, and great support for keeping the university in Budapest. No one that I spoke with can come up with any conceivable reason why it would not be in the long-term benefit of Hungary and its people to have CEU stay in place. We are actively working to build support on a bipartisan basis — public support — and my hope is that we’ll see some of that public support come out in the coming days and weeks.

LB: What was the idea behind bringing CEU students and faculty [to Washington]?

Berschinski: We really wanted to show lawmakers and policy-makers the real people that these amendments are impacting. So a pro-rector from CEU came with two graduate students, and we also had a number of CEU graduates who now live and work in America. We just wanted to put faces and names to this issue. It was incredibly powerful to have current students come talk to lawmakers and say things like: ‘I’m a PhD student, I should be in the library now writing my dissertation, but instead I have to be here in Washington, DC, talking to you, defending the very existence of my university.’ And I think — I can’t speak for them — but I think that had a major impact on lawmakers themselves.

LB: Many observers believe that the Orbán government, around the time of the US election, expected the new Trump administration to put much less emphasis on human rights and democracy, and expected Trump and the administration not to really care about issues like the Central European University. Why do you think the State Department has been vocal on the issue?

Berschinski: First of all, there’s a lot of upheaval within the State Department. A lot of positions remain unfilled, and the best thing you can say about the Trump administration’s foreign policy is that it’s all over the place. It has been in many ways pretty terrible on human rights issues, but there are some voices within the State Department, for instance our ambassador to the United Nations, Nikki Haley, who are standing up for human rights and approaching these issues from the perspective that the United States often does.

With respect to Hungary and CEU, I think that the State Department feels that this is a pretty egregious attack on the United States. CEU is accredited as an academic institution in the US, and has operated with absolutely no problem for 25-plus years in Budapest. Nothing changed, and all of the sudden there is a blatant assault on academic freedom and an entity with ties back to the US. So I’m happy to see the response that the State Department has made in public regarding CEU, but I’m not particularly surprised.

LB: What are your biggest concerns regarding Hungary right now? Human Rights First has worked a lot in terms of research and advocacy on Hungary.

Berschinski: I think the reason that we’ve focused a good bit of research on Hungary over the previous years is that you see a number of trends that we’re seeing across Europe and within the US all come together in Hungary. So the rise of Jobbik and far-right extremism and anti-Semitic voices, bigotry against Muslims and refugee populations, and then a steady erosion of democratic institutions within the country. Assaults on an independent judiciary, the media, historical memory — all of these problems have developed in the Hungarian context in a way that serves as a bellwether for democratic backsliding in other areas within Europe. So I think it’s appropriate to focus on Hungary.

Another thing to remember is that, on behalf of an organization like Human Rights First, that deals with advocating that the US have a foreign policy grounded in human rights, is that Hungary remains a very important partner of the US, it’s a NATO ally and EU member. It’s really important that a member state of those two organizations live up to the basic values that the institutions were built around. That’s increasingly not the case, and our job is to make sure that the American government and American people know that.

LB: Do you see US policy toward Hungary changing over the next few years?

Berschinski: I think it’s impossible to say. I think there’s still so much up in the air in terms of the Trump administration, so many jobs remain unfilled. We just don’t know which way it’s going to go. I can see one future in which the Trump administration lives up to Prime Minister Orbán’s wildest dreams, and allows for this increasingly illiberal approach. On the other hand, I could very easily see significant blowback within the US Congress, that is increasingly, I believe, stepping up to the plate and saying that we can’t have allies that don’t agree with us on issues of basic values, and the Congress may very well step in.