Budapest beltway to go under ground 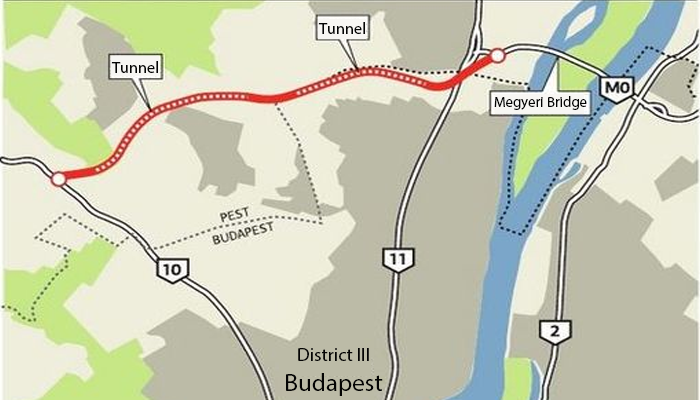 Part of the missing north-west section of the Budapest beltway (M0) is to be built starting as early as 2018 according to a government decision published today.

According to nol.hu an eight kilometer segment of four-lane highway is to be built between Budapest’s northern-most bridge, the Megyeri Bridge, and the Number 10 country road to the west which connects Hungary’s capital city to the northern city of Esztergom.  As the new section of highway will cut across the eastern tip of the Pilis mountain range, some 5 km is to be built under ground.

Nol.hu reports that the crucial environmental protection permit has been issued and that the planning and construction of the project will be the subject of a public tender to be issued the first quarter of 2014.  Building permits are expected to be issued in 2016 and actual construction should take place between 2018 and 2020.

The proposed 5 km in tunnels will only be the second time Hungary has built tunnels as part of its system of motorways. In 2007 as part of the HUF 266 billion (USD 1.2 billion) M6 highway construction project, 3 km of tunnels were built at a reported cost of HUF 51.9 billion (USD 235 million), or HUF 17.3 million (USD 78,000) per linear meter.  If this figure is anything to go by then the proposed 5 km long tunnel should cost well in excess of HUF 100 billion (USD 450 million) especially as this will involve boring through solid granite instead of sandstone.

In 2004 the City of Budapest began construction of a 7.4 km segment of the M4 subway at a projected cost of HUF 348 billion (USD 1.6 billion), or HUF 47 million (USD 213,000) per linear meter, including furnishings and equipment. The first section is scheduled to be completed in 2014 some time before next year’s parliamentary and municipal elections.

Construction of Budapest’s fourth subway line has been plagued with delays and cost overruns.  A popular joke in Budapest back in 2008 was that Peking had succeeded in building ten new subway lines for the 2008 Olympic games in one-tenth the time Budapest had taken not to build one. Some apologists complained that the comparison was not fair because in China public officials convicted of corruption are sentenced to lengthy prison terms or even executed.

Nol.hu reports that construction of the final northwest section of the M0 beltway between the M10 country road and the M1 motorway is also being planned will likely include the construction of 9 to 11 km worth of tunnels.  Once completed transit traffic traveling to and from points directly north of Budapest (Szentendre, Esztergom, Vác) will be able to completely bypass the capital city.  However, environmental impact studies for this final missing section have yet to be commissioned and construction is not likely to begin before 2020.