Budapest Chief Rabbi Robert Frölich: Hungary never faced up to its past 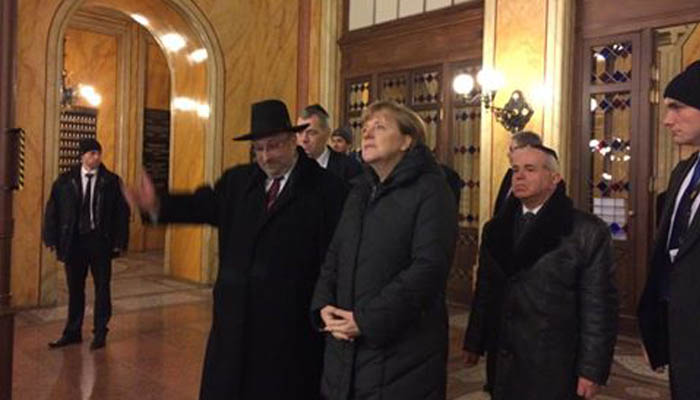 The Budapest Beacon sat down with the Chief Rabbi Robert Frölich of Budapest’s famous Dohany Street synagogue to talk about German Chancellor Merkel’s recent visit to Budapest. Rabbi Frölich tells us what he learned about her during her visit and why the visit was so important to Hungary’s Jewish community. We also talk about the difference between Germany and Hungary when it comes to coping with tragic historical events, what it means to be Jewish, and what Judaism has to say about charity and the treatment of migrants.

How much time did you have to prepare for Chancellor Merkel’s visit?

The information we received about Chancellor Merkel’s plans to visit the synagogue came maybe a month before. Initially, we thought this was merely a rumor. But it took about three weeks to organize her visit. It was mostly the embassy of Germany which was the main organizer of her visit. For me, personally, it took one day.

How does a rabbi prepare for a visit from the Chancellor of Germany?

Well, I think it makes no difference if it’s a rabbi or a prime minister. The Chancellor of Germany arrives. She is the number one person in Europe right now. It’s a big event! I was nervous, of course! I don’t want to appear as if I have a big ego and that I’ve gotten used to receiving people like the Chancellor of Germany. Madeleine Albright has visited our synagogue. Prince Charles has visited our synagogue. So we’ve had people, famous people, visit our synagogue in the past. Merkel was something different. She is the number one person in the European Union.

When she arrived I felt that a very good person who knows something about us has arrived.

About the Jews. About Judaism. About the synagogue. She didn’t behave the way you would expect a Chancellor would behave.

What would you expect from a Chancellor?

What do you think her visit to the synagogue meant for the members of this congregation?

The way she behaved, the time she spent with the Jewish community in the synagogue and then during her meeting with representatives of the Jewish community, it showed that the Chancellor of Germany – which means Germany, which means the leading power of the European Union – stands next to the Jews. This means more than sympathy. Her presence here showed a very strong support. In this time and age, here in Hungary and here in Europe, after what happened in France, at a time when anti-Semitism is growing all over Europe, it’s a very important gesture for the Jews that the Chancellor of Germany stands by you.

So her visit was very symbolic in this respect. You say that her visit was important especially considering current events, but how do you think her visit reflects on Germany’s interpretation of the past?

I think that the Germany of today is a very different Germany from the Germany of the past. Germany understands her responsibility for the Second World War and for the Holocaust. They’ve faced their past and said, “Yes. We did it. We are very sorry. It was us. We’ve learned from it. If it’s up to us we will never let it happen again.”

This, I think, is the most important thought in Germany, that they’ve learned from their past. They know that they made very serious errors, mistakes, sins and crimes, but it was not the only the persons, not only the individuals, it was Germany. And because of that they’ve been able to consciously build a very different Germany. There is a huge difference between the Germany of the Third Reich and the Germany of today.

I don’t want to provoke a political discussion here with you but is this different at all from what we see in Hungary today?

Hungary never faced up to her past. Of course, under Prime Minister Antall until the first government of Orbán, they said that “we apologize for the sins which were committed against the Jews.” They also said that these sins were committed by Hungarians. But, and this is a big but, if you look at the books from which the children are learning in Hungarian schools, you’ll see that there’s nothing about this.

I’ll give you another example. In Hungarian literature there are several great authors, even during the 20th century, even from the era of the Holocaust! There are very great and powerful authors of that period. But who do the children have to learn about? War criminals. Albert Wass. Albert Nyiro. Cecile Tormay. They were anti-Semitic, they were racist.

How long have you been the Chief Rabbi here at the synagogue?

That’s quite a long time. Is it typical to be at the same synagogue for so long?

I don’t know if it’s typical. I was very young when I was elected to be the Chief Rabbi of this synagogue.

How many times has Prime Minister Orbán come to visit you as Chancellor Merkel did?

He may have come to the synagogue twice or three times as the acting-prime minister.

What is it that people should know about the Jewish communities in Hungary?

Would you like the official data or my opinion? Officially, we have five Jewish faith groups here in Hungary. The mainstream is MAZSIHISZ which is the Hungarian Jewish Communities Federation. We have an orthodox community, we have two Reformed Jewish communities and we have the Chabad.

In my personal opinion, most Hungarian Jews – and we’re talking about 150,000 people – most of them are secular. Most of them are not interested in the faith groups and the synagogues.

A large portion of those who are interested in the faith and who have interest in Judaism belong to MAZSIHISZ, maybe 90 or 95 percent of them. The other three faith groups are very very small. Although, Chabad does have a big voice. They’ve got a big voice but a small number.

But to say something good and optimistic, here in Budapest which is the center of Hungarian Judaism, 90 percent of Hungary’s Jews live in Budapest. Every year more and more young people arrive to the synagogue, here to the Dohany Street synagogue, to the Buda communities, to Bethlen Square, Nagyfuvaros Street and so on. There are many small communities which are being visited by more and more youth year to year, and I think that’s a good start for the future.

What does it mean to be Jewish?

What does it mean to be Jewish? Halachically, it means that you have a Jewish mother or that you have converted to Judaism. It’s not so easy to answer. Another answer is that being Jewish means that you belong to a faith group with its own special history, customs and religion.

I had a teacher at the rabbinical seminary who once talked about someone. A student said about that person that the person was “a good Jew”. This teacher then asked, “Tell me, he doesn’t eat kosher, he does not come to the community, he doesn’t keep the Shabbat. Why is he a good Jew?”

What does Judaism teach about philanthropy and the treatment of immigrants or people who are seeking safety?

It’s very simple. In the Mishna, the main rabbinic code book, it’s written that there are three things the world is based on: Torahic teaching, Avodah – the service of God, and Gemilut Hasadim – charity.

In the Torah it is written expressis verbis that you mustn’t be cruel to the stranger or to the foreigner who comes to your land because even we were foreigners in Egypt. We know what it is like to feel what a foreigner feels. The Torah says that we know the soul of the foreigners, which means that our behavior towards immigrants must be good, we have to help them, because they are weak, they have no one to trust, they have no one who can help. So, you have to help them.

Like I said, immigration is not a Jewish question, but if a Jew has contact with an immigrant, it’s his duty to help him or her.