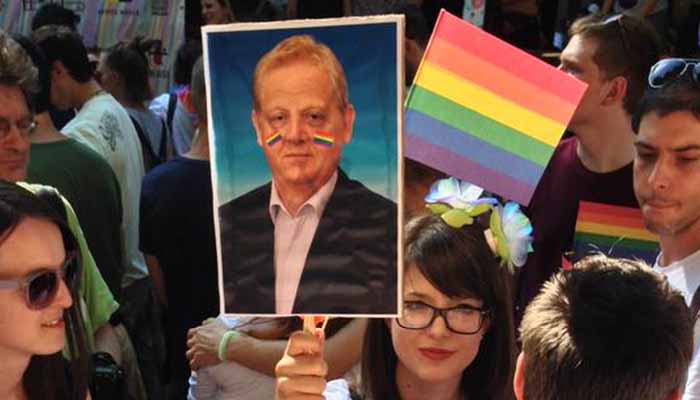 Hungarians and attendees from around the world attended the 20th annual Budapest Pride parade on Saturday afternoon. The event drew between 15-20,000 thousand people, and including numerous corporate sponsors and diplomatic representatives.

Unlike last year’s Budapest Pride, the parade’s staging ground this year was in front of the National Opera in the Andrássy Boulevard. Earlier that day, someone spread manure along the gardens lining the staging area, which caused the staging to smell like manure.

Event goers assembled in front the National Opera and moved down Andrássy onto József Attila Street, around Széchényi István Square (formerly Roosevelt Square), across the Széchényi Chain Bridge to Buda, and continued south along the road above waterfront the Danube waterfront to the park located at the base of Gellért Hill.

Police cordoned off intersecting streets and open areas to prevent anti-Pride demonstrators from spoiling the event. Undercover police were reportedly scattered among the mass of attendees and successfully prevented extremists from disrupting the parade.

Photographs of the event can be seen here.