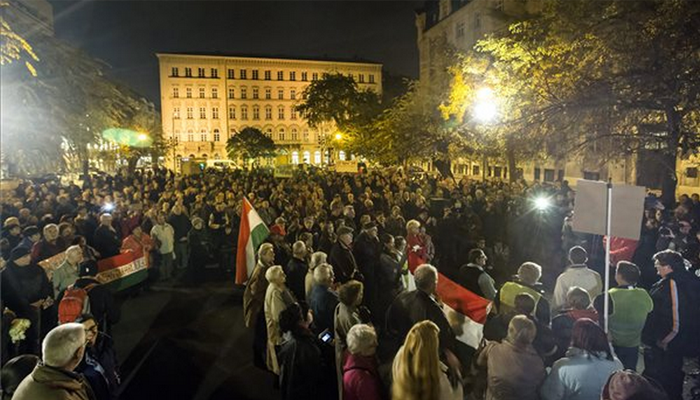 The demonstration was organized by civil groups who want Hungary’s “corrupt political elite” replaced by the formation of an expert government.  “Enough of partocracy and extortion,” exclaimed event organizer István Balogh, who told the crowd that the internet tax was merely an attempt on the government’s part to distract the people’s attention from the issue of high-level official corruption.

Attila Bertalan told the group that the country’s leaders had stripped the people of their rights, comparing it to when a tenant evicts an owner from his own flat.  “Half a million elite want to evict ten million people from the country,” he said.   In Bertalan’s opinion the country must be recreated on the basis of equality before the law.

From there the demonstrators left for the Sándor Palace in the Buda Castle District in the hope of presenting a petition to President János Áder. The demonstration is scheduled to resume Sunday evening in front of parliament in the Lajos Kossuth square and continue through Tuesday night.