Budapest protesters to “light a torch for Hungarian culture” this evening 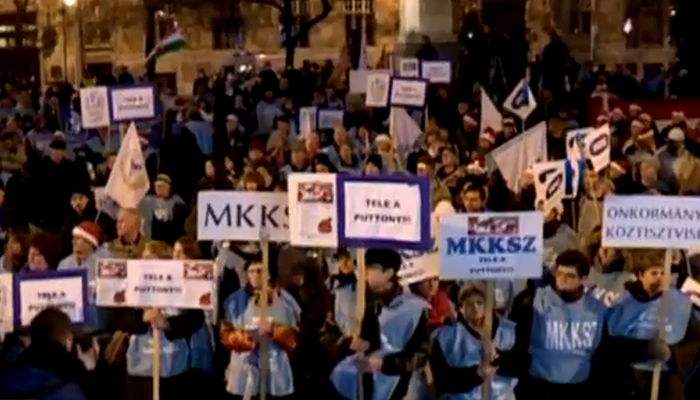 Today in Hungary culture as well as the employees of cultural institutions are in an embittered state.  It is not merely the libraries that are empty, but the stomachs of those working in them.  Employees of museums, archives, libraries, cultural institutions and other public collections are hungry.  Some must resort to rummaging through garbage cans.  The situation is unbearable.  For this reason a torch procession is planned for the evening of January 20th, just two days before the Day of Hungarian culture, by the Trade Union of Public Cultural and Public Collections Employees (KKDSZ).

At a demonstration held on December 6, 2014 in front of the Ministry for Human Resources (pictured), KKDSZ members demanded an immediate 5 percent increase in monthly wages “but not less than HUF 10,000 (USD 35).”

“A nation’s strength lies in the abundance of educated people”.  County István Széchenyi’s conclusion still applies.  But it is not so much an abundance of educated people that is characteristic of our age but rather their dearth.  Cultural employees in Hungary are no better off than anybody else.  The 2015 national budget does not provide for wage increases even though their real earnings have fallen since 2008.  Today there aren’t just working poor but hungary, even starving, working poor as well.  “This is not only our shame and those who unworthily look down at our profession, but the entire country’s shame” according to the event’s Facebook page.

The majority of experts working in the field of culture are not going hungry in a rhetorical, or symbolic sense, but literally.  The guaranteed net minimum wage is HUF 90,000 (USD 380) a month.  The Hungarian state does not provide these highly trained full time employees with a salary with which they could provide for their children on even the most minimal level.  “It sounds dramatic, but some rummage through garbage cans next to their work,” according to the trade union president András Földiák.

The state of culture reflects the impoverished state of its workers

“The reason they can do this to us and why we’re in such an unworthy situation because culture itself is in an unworthy situation” says Földiák, who is absolutely convinced the country’s problems will not be solved unless this also involves a spread of culture and knowledge.  “People must to some degree recognize their place in the world, because Hungary’s economy situation and the relationship among individuals are interrelated.  The reason politics are divided to such a degree today is because everybody is depending on politics to solve the problem” says the trade union president.

Without Democracy there can be no economic growth

“Before every major turning point in European history there was a strong cultural development.  It is enough to think about the French Revolution.  Academic and reading circles existed in every French city.   In order for something similar to begin in Hungary, the strong entrepreneurial segment, the intellectuals, and youth must all awaken to this fact.  It is necessary to launch an educational series on Democracy, because Democracy is not merely a theoretical thing.  Nor is it merely a question of laws.  Relationships within families and between men and women, the role of family head, the relationship between superiors and subordinates, and the way teachers talk to students–Democracy is in all of these things,” says Földiák.

“It is precisely for this reason that democracy and culture are very strong economic drivers. Why would a subordinate speak up if his superior does something stupic?  Would a citizen dare to speak out if a mayor is unsuitable?  This is Democracy, apart from the fact, of course, that free elections and other similar concepts apply.  “Nowadays a thousand things are going wrong in schools and local governments because bad decisions are being made, and nobody dare says anything” says Földiák.  “If an educational series about Democracy were to be launched, then change would be conceivable.  Today, however, precisely the opposition is taking place,” says the trade union leader.

Only “higher culture” is being developed

According to Földiák, only “higher culture” is being promoted.  “The government has made some gestures, for example the Academy of Arts or the Museum quarter, about which this evening’s protesters will certainly have something to say.  But apart from this nothing is happening.  And for this reason the cultural divide is growing at an inconceivable pace,” says Földiák, adding “because community culture is weak, that is why it is possible to put these workers in the umpteenth place.”

“Fundamentally we are fighting for a community culture that can can also improve the organization of public life.  This cannot happen without concerts or theatrical performances, but with this we are trying to strengthen community thinking” says the trade union president.  “Sweden and Finland became Democracies by forming study circles involving tens of thousands that still work to this day.  They study democracy there in the world’s greatest democracies are, because if you manage to form a Democracy, it is a very fragile thing and can be easily undermined.”

Abusing the names of Klebelsberg and Széchenyi

Kuno Klebelsberg advocated Hungary being intellectually strong, even if could not be territorially or militarily strong as a result of Trianon.  This cannot be said at all of the current government which created the Klebelsberg institute (Klik), says Földiák.

Today they refer in many places to Széchenyi, who spoke about a manifold of cultured men and who did much to advance this from the Academy of Sciences to the Casino.  But today precisely the opposition is taking place:  the government is not working to increase the manifold of cultured men but rather to decrease it.  The government has not done anything against culture (many would strongly disagree with this statement -ed.) but it hasn’t done anything for it either.  However, in the matter of schools it has done much against it.  Today fewer children study at in schools at every level, says Földiák.

If we have to take to the streets, we will!

You can say a lot of bad things about the Ministry for Human Resources (Emmi), but the conciliation of interests works very well under the current undersecretary.  Everybody was helpful.  They saw that there were big problems, but nobody said when the wage issue would be resolved, says Földiák.

We have been struggling continuously for five years.  At first we were struggling for a smaller wage increase, but now even a 30 percent increase would not offset this incredible gulph.  We honestly and very respectfully believe that it should be enough to discuss matters through negotiations a conciliation of interests.  But if this doesn’t help, then it will be necessary to employ stronger means, says the trade union leader, including hunger strikes, sit-in strikes, or other actions of this nature.

Földiák believes that if not many attend the demonstration it is not because his colleagues are satisfied but because they are scared, although he would consider a thousand participants to be a enormous result given the small numbers (15,000) employed in the profession.  Those who don’t want to come out that by the time they get home they will no longer have a job.  It is not for sure that this is the case but this is what the director of an institute in one of the county capitals told me, adds Földiák.

“I am confident in its efficacy, for example there are the teachers.  Discussion of increasing their wages only started when there was a teachers strike of big significance.  The torchlight procession planned for this evening is a reference to the enlightenment.  We want to fight against spiritual darkness with light” says the KKDSZ president.

The protest program and speakers

Tuesday’s protest will begin with the reading of a poem by actor Róbert Garai.  András Földiák did not want to say which one but Attila József’s “My homeland” is probably a good bet.

He will be followed by KKDSZ archival vice president, Csaba Csóti who will give a speech.  Csóti will be followed by László Trencsényi, founder of the Network for Curricular Freedom (Hálózat a Tanszabadságért).  KKDSZ’s other vice president, museum expert Katalin Papp will then address the crowd and will likely talk about the museum quarter the relocation of institutes from the Buda castle.

After the torchlight procession, Mari prize winning director Árpád Jászai Schilling will take the stage in the Szalay street, followed by Balázs Gulyás, organizer of the internet tax protest. András Földiák himself will be the final speaker.  The event will close with the reading of a poem.

Tentative program of the demonstration:

17:00   Gathering in front of the Hungarian Academy of Sciences

Speeches and program.  (Topics:  Abusing the name of Count István Széchenyi, the Hungarian Day of Culture being the birthday of Hungary’s national anthum,  “The misfortune of those who used to tear” – the situation of Hungarian culture as reflected in the 2015 budget).

Torchlight procession from the Academy to Szalay street.  (After visiting the Ministry for Human Resources the crowd will assemble in front of the stage next to the Ethnogriaphical museum).

Program and speeches.  (Topics:  Abusing the names of County Kuno Klebelsberg.  Cultural freedom, is politics once again “supporting-tolerating-banning”?  Culture and the internet, the freedom to obtain information.  Where is the end of the tunnel, or have cultural institutions and employs really become superfluous?)

Some words about the organizer:

KKDSZ was established on April 8, 1989 as an independent, democratic trade union.  Its members are full and part time employees of libraries, museums, archives, cultural institutions and other institutions housing public collections (such as animal parks and public gardens) and operating public spaces (e.g. recreational parks, youth and children’s houses). KKDSZ is the only organization representing the interests of people working in cultural institutions.

The main tasks of the organization is workplace protection, increase in wages and benefits, the manifestation of collective and individual rights, preserving the ability of institutions to operate, as well as cooperating in the preparation of budgets.  KKDDSZ moreover plays an actie role in the crafting of professional and occupational laws and regulations.

KKDSZ is not only a trade union, although protecting workers is its most important task.  Since its founding it has been a very strong professional organization as well, playing a very large role in the creation of laws forming the basis for the operations of institutes.

Organization’s activities and services are funded exclusively with income from membership fees.