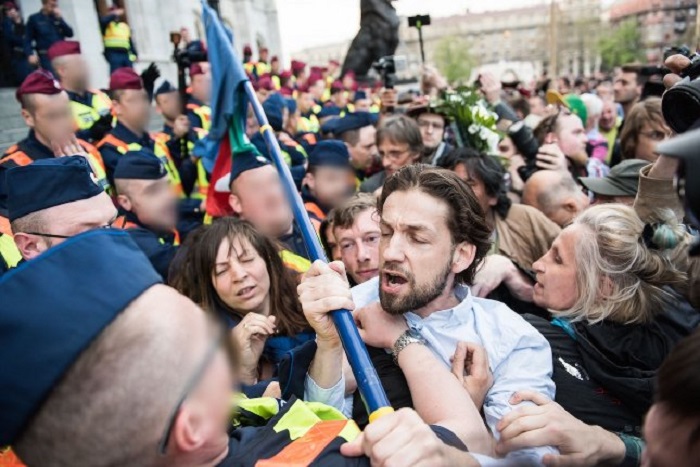 Police may have sought out students of Central European University who participated in Sunday’s demonstrations against the adoption of new legislation which threatens the potential closure of the school. Magyar Nemzet reports that two young women were approached in their homes by police in the days following the demonstrations, but police officials deny such an action took place on their behalf, leading to questions of who may have approached the students, how, and why.

While the woman was not involved in the organization of the protest, her face appeared in many press photographs as she stood in the front row of Sunday’s march.

Late Monday night, a police officer appeared at her apartment in central Budapest, checked her identification, and would not leave until he had taken a look around her apartment. In a letter the woman wrote to Magyar Nemzet, she describes the encounter:

A police officer rang the bell on April 3 at about 11.20 p.m. I got surprised and shocked because I was not expecting anyone to come to my place. He was already in the building, I don’t know how he got into the building because the main door of the building is always closed. When the bell was rung, I opened the window near to the door, and he said something in Hungarian. He was talking on a phone or walkie-talkie at the same time. I heard a mechanical woman voice from that walkie-talkie.

Then, he said “passport.” I poked my passport through the window but he didn’t take it, instead he stared at me. Then, I understood that he wanted me to open the door. I asked him “are you police?” and he just said “police.” I opened the door and gave him my passport and residence permit card. He examined my passport and residence permit. He spelled my name and I guess the numbers that are written on my passport to that woman on the walkie-talkie. It took 5 to 10 minutes. I can’t be sure. Then he said things in Hungarian but I didn’t understand. He poked his head and upper part of his body through the door inside the flat. I stepped back, and he took one step inside the flat. He looked through the common area and walls of the flat. Then, he looked at me and got outside the building while speaking in Hungarian. He stared at me for a while and he left.

Another CEU student, a Hungarian citizen, also reported an unusual encounter with police following Sunday’s demonstration. The woman, who was among the organizers of the protest, claimed that she observed a police officer pacing in a corridor outside her apartment Tuesday morning, a corridor she said is only accessible with a key possessed by residents of that part of the building. The police officer had a ring of keys in his hand.

“I asked him what or who he was looking for, and he mentioned an address which was not in our section of the corridor,” she told Magyar Nemzet. “I told him which gate he would have to open to get there, and he tried but none of the keys he had would open the lock.”

The woman asked whether she could help the officer, but “he didn’t react to me, only said something into his radio and went away.”

Security policy expert Péter Tarjányi told Magyar Nemzet that such police actions are allowed under Hungarian law, and that no secret service permissions are required. He said that it is now routine policy for police to take photographs and videos of demonstration participants and use photo-matching computer software to identify subjects in a government database.

Tarjányi added that while such a visit by police is legal, the officers’ failure to identify themselves or the reasons for the visit, as well as the officer entering the foreign student’s apartment without providing cause, were unlawful. Tarjányi questioned whether the men were police officers at all, as even secret service agents such as those of the Constitutional Protection Office must identify themselves if they are engaging in an open investigation.

Both the Budapest and National Police Headquarters denied that officers had been dispatched to either of the CEU students’ residences. One of the students claimed her place of residence does not appear in any official documentation, raising questions as to who, if not the police, was responsible for the unusual visits, and how they came upon the information used to locate the students.

At another CEU protest on Tuesday at Kossuth Square, plainclothes police officers were observed scuffling with demonstrators in front of a line of police near the steps of Parliament. The men, described as “bouncers” in several Hungarian media, refused to identify themselves, with one claiming that his identification had “fallen off.”

When questioned by index.hu, the police department responded saying the men were plainclothes police who had acted properly, a claim rejected by the Hungarian Civil Liberties Union (TASZ), which claimed in a statement on Facebook that the men had “within sight of the police tried to stand in the way of and intimidate protesters. Whether they were civilians or plainclothes police officers, such a scene would not be allowed to take place in front of a police line.

“If they were non-police acting in civilian clothes, then the police failed to protect the citizens practicing their fundamental rights from violence,” the TASZ statement continues. “If, however, they were plainclothes police officers, then they shouldn’t have acted violently. Police intervention in a peaceful assembly is only accounted for if the acting police officer is clearly identifiable, and not if they act in disguise to hold back citizens who wish to express their opinions.”

Another protest against the higher education law is planned for Sunday at 5 p.m. at Ybl Miklos square in Buda, in front of the Várkert Bazár. Organizers plan to march across the Chain Bridge to Parliament at Kossuth Square. According to a statement on the protest’s Facebook event page, “We strongly believe that freedom of education and freedom of thought are not negotiable. We know that the government only backs down if we show force, if we march in masses. [President] János Áder has until Monday to veto the passed bill, and to send it to the Constitutional Court. Let’s show him this Sunday what is the only right choice!”