Chains and chaos at protest against Liget project 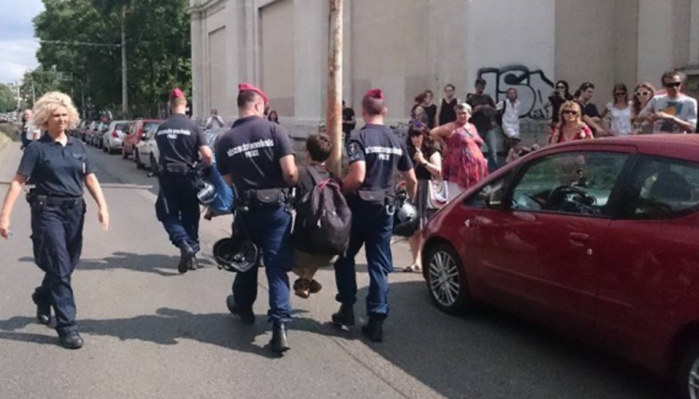 Chaos ensued at the Museum of Transport in Budapest’s City Park, where activists chained themselves to the building in protest against plans to transform the park. They shouted slogans and broke down fences erected by security guards. Emergency police were called, taking away not only activists but politicians as well.

A two-day protest against the demolition of the Museum of Transport ended with police removing activists chaining themselves to the building. Police were called after the brawl between Ligetvédők (Park Protectors) and security guards turned violent.

As The Budapest Beacon previously reported, protests at the museum started on Sunday evening. Members of Ligetvédők were camping next to the building, one of four to be demolished as part of a greater project to transform City Park. The Liget Budapest project has been criticized for encroaching on one of the most used green spaces in the city, and for its plans to cut down 3% of the park’s 6500 trees.

After the sitting protest had begun, a group of security guards appeared and started to cordon off the premises. When a small fight broke out, police were called but no arrests were made. On Monday morning, Városliget Zrt. issued a statement saying the demolition of the Museum of Transport has begun.

The events turned even more chaotic on Tuesday when many activists returned to the scene. Some of them crossed the fence and started a sitting protest in front of the museum. A bit later they were removed by police and charged with minor offences.

Another hour passed before another group of activists broke through the cordon and climbed on to the walls and roof of the museum. At this point, there were a number of media outlets covering the events, 444.hu reported. Although a minor brawl broke out between security guards and protesters, the guards went away and emergency police were called.

Around noon, Attila Sági, engineering director of the development authority Városliget Ingatlanfejlesztő Zrt., appeared at the scene. He told journalists he would request an order from authorities for the protection of the property because the action of Ligetvédők was no longer a form of protest that could be tolerated.

When emergency police units arrived early afternoon, protesters started chaining themselves to the building. Soon after, police started removing them one by one, as shown on the video posted by Ligetvédők on Facebook.

Leader of the group Gergely Komáromy used a megaphone to give a speech from the top of the museum.

Afterwards, a reggae artist started singing, while police formed a wall and started pushing everybody out. The fire brigade was also called to remove people from the rooftop.

Szabolcs Hegyi, lawyer of Hungarian Civil Liberties Union (Társaság a Szabadságjogokért – TASZ), told the Budapest Beacon that since security guards could not prove they had the right to fence off the premises, the police should have intervened on the activists’ side. After the incident, Ligetvédők filed a report to police on two counts: absence of police intervention and breach of the right to assembly.

Among those taken away by police were László Moldován, a member of the municipal assembly of Budapest’s 7th district, reported Hungarian news website, Index.hu.

Rebeka Szabó, vice-mayor of the 14th district, also visited the protest. She told Index.hu that she hoped this would be a peaceful demonstration. Police asked the politician to identify herself and later escorted her out.

Zoltán Illés, former Fidesz undersecretary of environment, told journalists he opposed the destruction of the park. Witnesses told Index he helped in removing the fence set up by security guards.