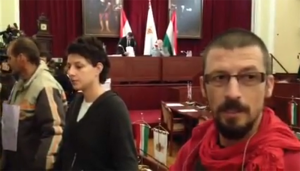 “Banning the homeless from certain parts of the city is a bad solution and a bad idea”.

The Budapest city council passed a law this afternoon making it illegal for homeless people to occupy parks, playgrounds, underpasses, overpasses, and areas within 50 meters of city roads.

Budapest Mayor Istvan Tarlos was forced to postpone this morning’s city council meeting after activists  formed a human chain around council chambers in protest of the bill.

At the end of September the Fidesz-KDNP controlled parliament passed a law banning the homeless from “world heritage sites” (purple) and adjacent areas (red), as well as Margit Island and the city Park (see exhibit below).  The area in question covers much of downtown Budapest, including the entire 1st and 5th districts.  The law authorizes the City of Budapest and its district governments to designate additional public areas where the homeless may not reside.  It also prescribes stiff fines for violators. Those unable to pay the fines can go to jail.

The Budapest homeless law has been widely criticized as inhumane and unenforceable.  At today’s demonstration LMP co-chairman Bernadett Szel accused the government of “persecuting homeless people.”  Others have called for uninhabited council flats to be made available to the homeless instead of herding them into shelters that are often dangerously overcrowded.  According to HVG there are 4831 council flats in Budapest there are presently uninhabited.

Government and City spokespersons argued that the homeless are better off at City and NGO-run shelters than on the street.  Human rights activists have condemned efforts to force homeless people into shelters against their will, believing it to be a violation of their civil liberties.

In a recent interview Menhely Alapitvany director and adviser to Mayor Tarlos, Peter Gyori, said “banning the homeless from certain parts of the city is a bad solution and a bad idea.”  He said that the law is impossible to enforce because homeless people cannot know precisely what areas of the City they are permitted to occupy.   He said existing homeless shelters are running at near full capacity and can only accommodate an additional 200-300 people at best.

Interior Minister Sandor Pinter claims City shelters can accommodate up to 20,000 in winter.  However, according to figures obtained from Menhely Alapitvany, Budapest shelters only contain a total of 5,500 beds.

“There was never enough space for every homeless person,” Gyori told ATV’s Olga Kalman. “Since last year more than 1000 homeless people have been moved into shelters, but one cannot notice this in the streets because they are being replaced by new homeless people.”