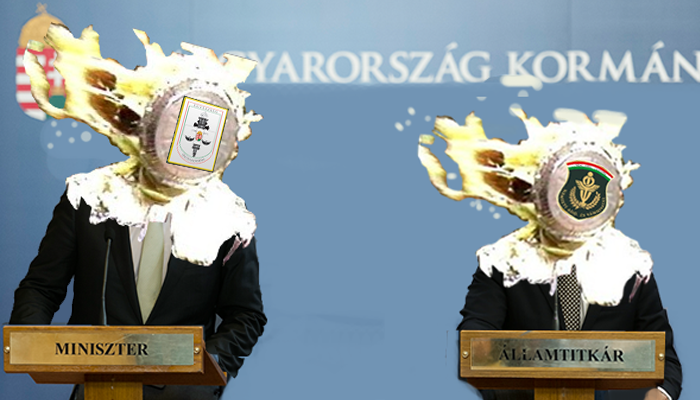 “Already the second pillar has fallen in the government’s campaign against civil organizations. After the civil organizations supported by the Norway Civil Fund passed the City Chief Prosecutor’s investigation with flying colors, on Tuesday the National Tax and Customs Office (NAV) closed its investigation into Ökotárs and seventeen other associations and foundations for lack of evidence.  The civil organizations reported by Lázár operated lawfully.  The prosecutor did not find substantive problems, despite the police previously taking away the head of Ökotárs.”  – Index.hu

City prosecutors have completed their investigation into five civil organizations reported to authorities by the Government Audit Office (KEHI) in October 2014 writes Magyar Nemzet.   Prosecutors have concluded that the organizations involved in the distribution of civil funds operated lawfully, having detected only a few minor administrative mistakes over the course of their year-long investigation.

Prosecutors investigated whether the three foundations and two associations operated lawfully in the areas investigated by Kehi.  Bettina Bagoly, spokesman for the City Chief Prosecutor’s office announced that the three foundations did not require any “substantive action” be taken on the part of prosecutors.  Despite finding that one organization committed a misdemeanor when it failed to post annual financial statements for 2012 and 2013 to its website, city prosecutors have requested that the case be dismissed.   The fifth association is no longer in operation.

KEHI launched an investigation into the use of Norway Civil Funds last autumn at the instigation of the Office of the Prime Minister after János Lázár accused the Kingdom of Norway of using its Civil Fund to channel funds to NGOs close to opposition political parties–a claim that was categorically rejected by the Norwegian Minister for EU Affairs.

Just prior to that Norway formally notified Hungary that it was suspending disbursement of tens of millions of euros worth of development funds to the Hungarian government.  When Norway refused to suspend the disbursement of funds to Hungarian NGOs (including a number critical of the Hungarian government) from its Civil Fund, the government retaliated by clamping down on media and civil society in Hungary–essentially threatening to put Hungarian NGOs that had received funding from Norway’s Civil Fund out of business.

The Norwegian embassy and others strongly objected to the KEHI audit, claiming it breached international agreements.  Adamant that Kehi had no jurisdiction over NGOs distributing or receiving Norway Civil Funds–a position shared by the relevant Hungarian ombudsman–the Norwegian embassy refused to accept KEHI’s findings.

Index reported that the evidence presented to the press by KEHI last October was very sketchy, even though previously the police had turned out in force to raid the offices of fund administrator Ökotárs, whose director, Veronika Móra, was even taken away by police to be interviewed.

Index.hu writes that contrary to accusations made by various government officials, NAV found that the activities of Ökotárs and beneficiary organizations were continuously documented, that all laws were kept, and that occasional changes were properly documented, and that they fulfilled all the obligations relating to their inspection.

The daily online further writes that despite the legal and political attacks on civil organizations, the Norway Civil Fund announced that it had, through its open tender process, been able to help either launch or complete 430 civil projects in such fields as defense of human rights, youth volunteerism, environmental protection, and the strengthening of vulnerable groups.

In a statement issued this afternoon KEHI, apparently eager to defend its professional reputation (and perhaps even that of the Minister Overseeing the Office of the Prime Minister to which it reports, namely János Lázár), announced that on the basis of investigations conducted last autumn at Lázár’s request, it had initiated investigations into seven civil recipients of Norway Civil Funds, of which five were based in Budapest and two in the countryside.   Kehi claims prosecutors found that three of the organizations responsible for distributing civil funds “did not operate according to the laws” and that the government initiated the dissolution of two of them.  A third one initiated its own dissolution, and a fourth one ended its legal status as a public institution.

KEHI reported the Norway Civil Fund beneficiary organizations to authorities because it claimed they had used money for purposes other than those approved.  At the same time KEHI requested NAV to conduct an “extraordinary tax audit”.

KEHI has eight days to contest the decision.  Furthermore, a third procedure is still ongoing.  The fate of the tax numbers of Ökotárs, Autonómia, DemNet and Kárpátok hangs in the balance.

Magyar Nemzet reports that Lázár promised last year that if the investigations prove the civil organizations innocent, he would apologize.

The publication of the astonishing news late on a Tuesday afternoon just as the daily weeklies are going to press seems deliberately timed to spare the government embarrassment.  It remains to be seen whether Lázár will hold his regularly scheduled weekly marathon press conference on Thursday, or whether recently confirmed Minister for Government Propaganda Antal Rogán will hold it in his place.

(In light of all that has happened, we at the Budapest Beacon believe the only decent thing for Lázár to do is resign . . . right after he fires his sidekick in crime, deputy undersecretary for communications Nándor Csepreghy!)