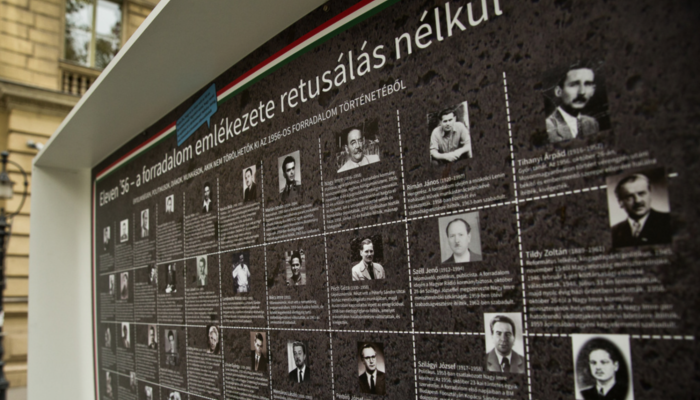 “The temporary outdoor exhibition of the House of Terror Museum, which is meant to commemorate the 1956 revolution and freedom fight, entitled ‘1956 – For Freedom and Independence’ starts here. The House of Terror Museum takes no responsibility for any content before this point, either in the form of text or photographs. These form the part of a political provocation. 22 October, 2016. Budapest.”

In protest of what it calls historical revisionism concerning the 1956 Hungarian uprising, Hungarian civic group Eleven Emlékmű (Living Memorial) has erected two large information boards in front of the House of Terror Museum in Budapest. The boards are meant to “supplement” the eight official informational tables that the museum erected as part of a commemorative installation, which the group says is a brazen display of historical revisionism.

House of Terror director, Hungarian revisionist historian Mária Schmidt, was put in charge of this year’s 1956 memorial events at home and abroad, with a budget of HUF 13.5 billion (USD 46.5 million).  Living Memorial, which made headlines in 2014 by protesting a highly controversial memorial to the victims of the German occupation of Hungary erected in Szabadság square, claims that the museum’s installation deliberately omits the names of dozens of communists and social democrats who fell victim to Russian reprisals following the crushing of the uprising, including prime minister Imre Nagy and members of the Petőfi circle of writers and journalists.

The two “supplementary” placards feature the names of 60 individuals jailed or executed after the uprising but not appearing in the official installation.

The House of Terror has responded with a sign of its own, which it placed between its own installation and that of Living Memorial. The sign reads, in Hungarian and English:

“The temporary outdoor exhibition of the House of Terror Museum, which is meant to commemorate the 1956 revolution and freedom fight, entitled ‘1956 – For Freedom and Independence’ starts here. The House of Terror Museum takes no responsibility for any content before this point, either in the form of text or photographs. These form the part of a political provocation. 22 October, 2016. Budapest.”

Art historian and member of Living Memorial András Rényi told index.hu he finds it symbolic that the names of Imre Nagy and István Bibó are considered political provocation by the current government. The dominant narrative of the events of 1956 in public spaces and in public media, Rényi said, only shows a slim part of the historical reality, and even then in an empty, kitschy way. According to this narrative, anti-communism and nationalism united the Hungarian nation in 1956, and the communist politicians of the time are being left out of the picture.

According to 1956 Institute director János M. Rainer, Imre Nagy and other reform communists have played an increasingly uncomfortable role in memorial politics since 2010. There was no leader to the revolution, he said in an interview with Index, but there were symbolic faces, and Nagy’s is obviously the most prominent. However, it is difficult to fit him into the anti-communist narrative, Rainer said.

Nagy was a reform-communist politician during the Stalinist period in Hungary and was prime minister between 1953-1955, and again by popular demand at the start of the anti-Soviet uprising in October 1956. Spirited off to Romania, his captors returned him to Hungary in 1957 where he was secretly tried and executed for treason in 1958. As both a leading actor and political figure during the revolution as well as  a committed communist, Nagy poses a problem for the anti-communist narrative. A great many other anti-Soviet rebels of the uprising were also committed communists, and these are the characters Living Memorial accuses the House of Terror and the government at large of trying to expunge from history.

House of Terror contains exhibits related to the fascist and communist regimes in 20th-century Hungary and is a memorial to their victims, including those interrogated, tortured or killed in the actual building.