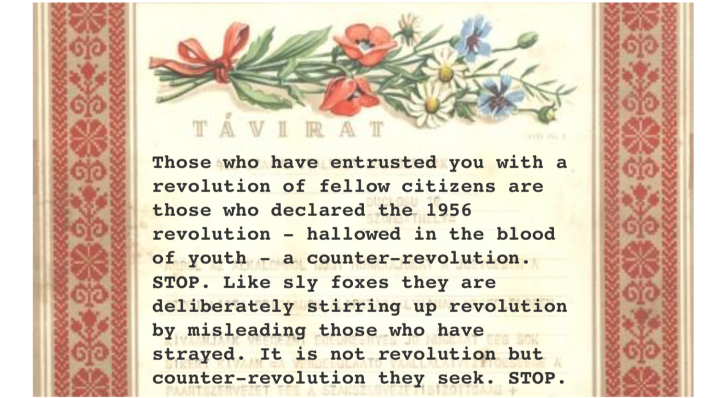 Telegram to those who have strayed!  In a Democracy the opposition press and mediums are also obliged to publish the opinion of the majority of civil society. Let’s see courage and respect for the freedom of speech!

(No problem, even though it is not our impression that the Civil Unity Forum (CÖF) represents the opinion of the majority of civil society, but rather that of a narrow group of Fidesz oligarchs and their minions-ed.)

We are making public what we have to say in the form of a telegram before the accelerated and soon to be countless demonstrations. Our goal is to remind you of the inevitable events of the political past. At the same time we are worried that part of our fellow citizens are being deliberately misled by clipped-wing politicians.

After the failure of the Hungarian Socialist Workers Party (MSZMP) the Communist regime left an enormous amount of debt for the people. Instead of the expected good life, we citizens had to pay all of it. STOP. The assets of the Communist Youth League (KISZ) and trade organizations vanished. The assets of the MSZMP were inherited by the reincarnated successor party, the MSZP. STOP.

There was no accountability, historical justice, lustration (purge of former communist officials from government-ed.) STOP.

After eight years of governance, the MSZP-SZDSZ coalition once again brought the country to the edge of bankruptcy. The state debt increased to 85 percent of GDP. STOP.

After taking out loans from the IMF and the European Central Bank, the need to repay the debt was “sewed to the neck” of every Hungarian person. STOP.

Even today the foundation of the Hungarian National Asset Manager MNV Zrt. and the winding up of its predecessor is being investigated. The suspicion is the misappropriation of a large amount. STOP. The falsification of the country’s balance sheet, deceiving the EU and hundreds of tricks characterized the Gyurcsány government for the sake of retaining power. STOP.

More than 90 percent of the nation’s assets were stolen-privatized. STOP. They destroyed the livelihoods of FX debtors, and cast thousands of families into hopelessness. STOP.

We await the answer as to when MSZP will repay its HUF 2 billion debt and why the liquidation of the party has not been started. STOP.

They accuse members of the government of corruption. In the interest of putting their consciences to rest, we recommend an examination into the method by which Ferenc Gyurcsány, Péter Oszkó, JánosVeress, János Kóka, Gábor Simon, Miklós Hagyó accumulated assets. STOP.

Finally, those who have entrusted you with a revolution of our fellow citizens, are those who declared the 1956 revolution a counterrevolution, hallowed in the blood of youth. STOP.

Sly as foxes they are deliberately stirring up revolution by misleading those who have wandered off. It is not revolution but counterrevolution that they want to set off. STOP.

Fellow citizens!
We have to make our homeland and the EU better together. Become reconciled and let us build the country together.
In this theme there cannot come more “STOP”.