“Clap along if you know what happiness is to you” 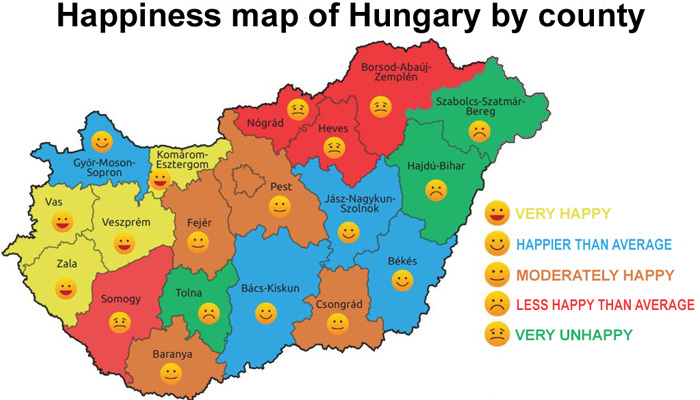 The first ever national happiness survey has been conducted by Eötvös Loránd (ELTE) university’s Positive Psychology Laboratory at the initiative of the Jobb Veled a Világ Alapitvány (The World is Better With You Foundation), reports Népszabadság.

The survey found that Hungary’s happiest people live in the wealthiest western counties, while the unhappiest live in the poor northeast and southwest. Residents of Pest county, which includes the capital city, Budapest, are only “moderately happy.”

Over 5,000 people from 737 towns filled out a 67-question survey which sought to determine how well people are able to overcome stressful situations, the status of their mental health, and the techniques they use to make themselves happy. The median age of those surveyed was 40.6 years.

The ELTE professor who led the survey, Attila Oláh, explained that the level of happiness is determined by measuring several general categories: emotional, social, psychological and spiritual well-being.

According to the survey, the typical happiest Hungarian is a woman living in Transdanubia (the part of Hungary to the west of the Danube river) in a small town, between 30 and 50 years of age, with a university education and a family of four or more children. The typical unhappiest Hungarian is a man over 50 living in the north or in Budapest, who is lonely and without children, has an eighth-grade education, is unemployed, is unable to deal with stress, and has no positive sense of the future.

The United Nations publishes a list of the world’s happiest nations every year.  158 countries are surveyed concerning their satisfaction with life and their lifestyle, and their experience of freedom and the country’s health and social services. According to the survey, Denmark is the happiest country, followed by Iceland, Norway and Canada. Hungary takes its place toward the bottom of the list, surpassed in unhappiness only by Ukraine, Portugal, Russia, Slovakia and Bulgaria.