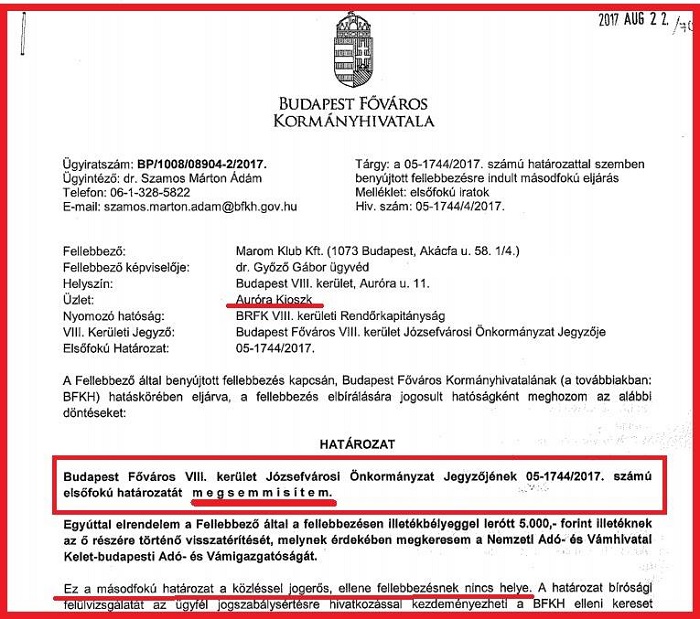 The Budapest Capital City Government Office has declared that the District VIII municipality’s closure of two cafés run by an eighth district community center was unlawful, and that the cafés may reopen and resume their activities, 444.hu reports.

Auróra, a Jewish-run community center in Budapest’s eighth district that runs a nightclub and serves as a home for multiple Hungarian NGOs, was raided by police on June 10. Police spent 14 hours at the scene, as 120 people were each asked to present identification while they were searched for drugs. 15 arrests were made, and some two grams of marijuana were confiscated.

Two weeks later, Auróra’s two cafés were shut down with immediate effect by the District VIII municipality, for a maximum of one year. As justification for the closures, the municipality cited the confiscated marijuana, as well as lack of a commercial permit (which Auróra insisted it possessed).

Marom Klub Kft., the company that operates Auróra, was legally represented by human rights NGO Hungarian Helsinki Committee, which declared in a statement after the legally binding decision that “based on the circumstances the business could not have been temporarily closed (for a maximum of one year) in the interest of public safety, even though that is indeed what the district police recommended. According to the law, the possession or consumption of a small amount of drugs does not justify the closure of entertainment facilities”.

The company is considering suing the district for damages arising from the unlawful closure. Auróra will reportedly reopen in October.