The Civil Unity Forum (Civil Összefogas Forum, or CÖF) is a pro-government NGO founded, run, and allegedly financed by individuals with close ties to the governing Fidesz party.  The Hungarian equivalent of a political action committee, CÖF falls outside the purview of strict new laws governing political advertising in Hungary.  Acting as Fidesz’ proxy, COF has launched the largest (and most costly) smear campaign seen to date in Hungary.

Within a week of the main left-wing opposition parties announcing that they had formed an electoral alliance, the advertisement appearing above appeared on thousands of billboards throughout the country.  It depicts opposition leaders Attila Mesterhazy, Ferenc Gyurcsany, and Gordon Bajnai in a mock police line-up next to former Budapest deputy mayor Miklos Hagyo (who is not a candidate for office but is on trial for corruption).  A clown’s left arm is draped around Gyurcsany’s shoulders.  Written across the bottom of the ad is “They don’t deserve another chance.” 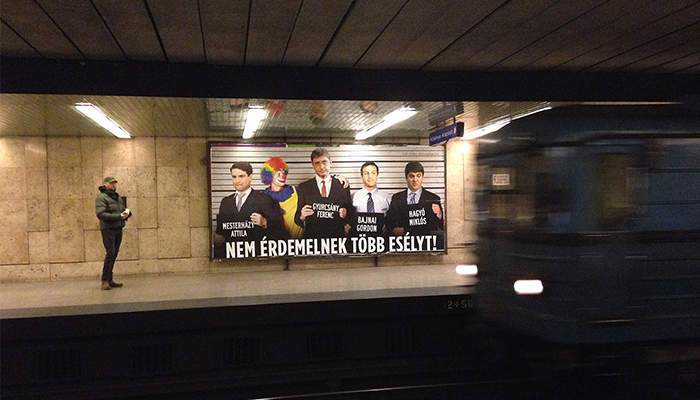 The billboard is ubiquitous, with multiple copies often appearing in close proximity to one another. Delmagyar.hu reports that two such ads were posted side by side on the grounds of Janos Arany Elementary School in the southern Hungary city of Szeged.

A student’s mother told Delmagyar.hu that “politics has no place on the grounds of a school.”

A grandmother escorting her grandchild to the school told Delmagyar.hu that, “COF’s billboards aren’t considered political advertisements, that’s why they can put them anywhere. It doesn’t belong in a school, not even out in front of the school.”

One young mother has no problem with the billboards because they do not face the classrooms.

Hungary’s public schools were nationalized after Fidesz came to power in 2010. The decision to allow the erecting of these billboards on the property of the Janos Arany Elementary School was made by the Educational Institute Economic Service Provider (Nevelesi-Oktatasi Intezmenyek Gazdasagi Szolgalata, or NGSZ).

“We took immediate action to cover the billboards, and after that we removed the billboard stands”, the director of NGSZ told Delmagyar.hu.

“The billboards didn’t catch people’s attention earlier because from afar they couldn’t see they weren’t on public property, and also because it didn’t face the school.”