Colleen Bell speaks out in support of Ukrainian sovereignty 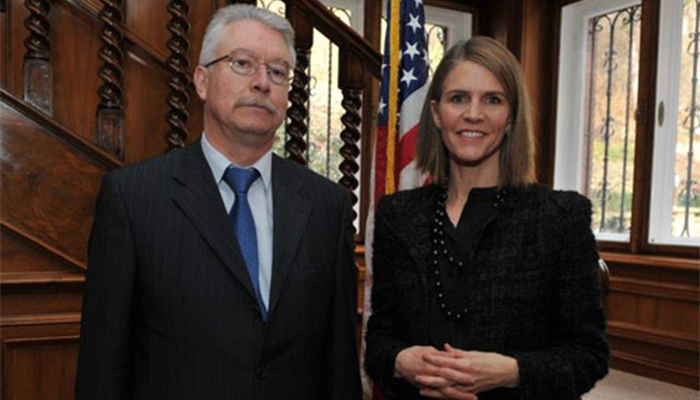 US ambassador Colleen Bell delivered the following remarks today at an official lunch to which Ukraine’s top diplomat in Hungary, Mihajlo Junger, was also invited (both pictured).  The event coincided with Russian Federation President Vladimir Putin’s visit to Budapest and was attended by Levente Benkő, deputy undersecretary at the Ministry for Foreign Trade and Foreing Affairs (KKM), ambassadors from Poland, Italy, Canada, Slovakia, Lithuania, and the Czech Republic, as well as the Norwegian and German chargé d’affaires.

I know we were all cautiously optimistic — maybe cautiously hopeful is a better way to put it — about the further pledges that were made in Minsk last week to stop the fighting in Ukraine.  Like our partners and allies, the United States appreciates the efforts of the OSCE, Chancellor Merkel and Presidents Hollande and Poroshenko.  Ceasefire implementation has been fragile and the United States calls for the full implementation of the Minsk agreements, which apply in and around Debaltseve as well.  It’s appropriate to pay special thanks to the diplomatic efforts of our European allies, Chancellor Merkel and President Hollande, and their teams in making these agreements possible.

I agree with Chancellor Merkel, who called the outcome of that marathon negotiation “a glimmer of hope.”  I know we all concur that the ceasefire must be honored.  The true test of Minsk will be in its full implementation, including the end of violence, and the restoration of Ukrainian control over its border.

And more than that, I find it significant and inspiring that the unity of effort among us has played such a critical part.  Our unity on sanctions has sent a clear message to Russia, that we cannot be divided.  And our collective message has also made clear that we do not accept the vision of “New Russia,” we do not accept Moscow’s explanation for the shooting down of the Malaysian airliner, we do not accept missile attacks on civilians in Mariupol, and we do not accept continued falsehoods about the recruiting, arming and equipping of separatists who are murdering and maiming innocent people including defenseless children.  We say no to this.  We say yes to Ukraine’s sovereignty.

Actions will be what matter now.  We judge the commitment of Russia and the separatists by what they do, not what they say. We also welcome the news that the Government of Ukraine and the IMF have reached an agreement that will allow the IMF to provide Ukraine with $17.5 billion in financial assistance in support of economic reforms.

This agreement will enable Ukraine to continue implementing the reforms it needs to build a stronger, more prosperous, democratic future for the people of Ukraine.

As you are all well aware, President Putin is in Budapest today.  We could think of no better way to observe the day than to focus on our hopes for Ukraine’s sovereignty and its future, and to share those hopes with you, Mr. Junger, among our friends and allies.

Thank you all, once again, for coming.  I look forward to your comments and hope our discussion today will offer us all a chance to reflect on our exceptional unity as an alliance.  Thanks again to everyone for joining us today.  Now I would like to toast Mr. Junger, and ask him to share a few words with us.