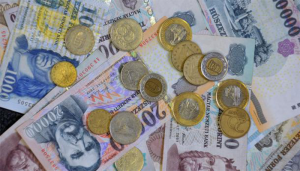 Low interest loans disbursed to companies in September at interest rates of between 2.34 and 2.53 per cent helped to offset a steep fall in the level of corporate debt the first 8 months of 2013, bringing to HUF 94.4 billion total loans issued the first nine months of 2013.  At the same time the cost of regular commercial loans increased slightly in September.

In September private household debt fell to a five year low of HUF 7.03 trillion, with banks only placing HUF 15 billion (USD 70 million) in new loans in September despite mortgage loan interest rates falling to between 6.82 and 8.77 per cent.  Consumer debt has decreased steadily over the past four years as households pay off hard currency based mortgage and consumer loans. Reluctance on the part of households to borrow money caused interest rates on consumer loans and overdraft facilities to decrease over 1 per cent to 18.73 per cent and 28.81 per cent, respectively.

Total consumer savings in the form of bank balances decreased HUF 117 billion (USD 580 million) in September to a five year low of HUF 6,907 billion.  Total savings decreased HUF 807 billion (USD 4 billion) the first ten months of 2013, the result of the introduction of an obligatory 17 per cent “health care contribution” tax on interest income (on top of the 16 per cent tax on income already in place) and the fact that the rate of interest paid by banks after deposits decreased from 5.85 per cent at the end of last year to 3.15 per cent as of the end of September.