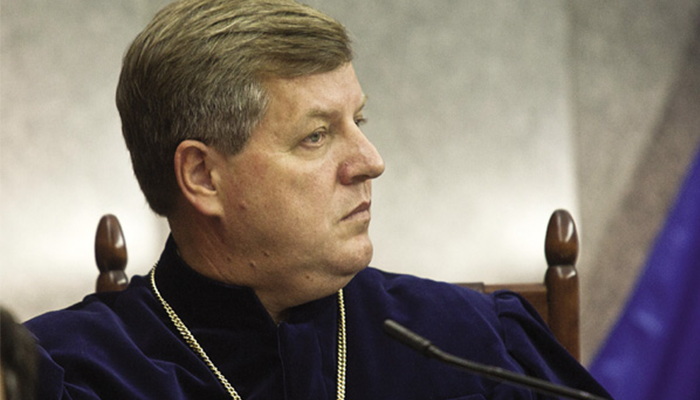 Editor: An earlier version of this article incorrectly state that Istvan Stumpf (pictured above) authored the Constitutional Court’s decision that is the subject of this article.   We are advised by Justice Stumpf’s council that he voted against it.  We also incorrectly identified him as a former Fidesz MP when, in fact, he was neither a member of Fidesz nor a member of parliament while serving as Chancellor (head of the Prime Minister’s office) during the first Orban government.  We apologize to Justice Stumpf and to our readers for the mistake.

In a decision opposed by Istvan Stumpf (pictured above), Hungary’s Constitutional Court ruled last week that internet content providers can be held liable for unlawful user-generated comments, even if they remove the unlawful comment from their webpage.  The decision has been widely critized for encroaching on the freedom of expression in that it essentially compels internet-based media to censor or eliminate altogether readers’ comments.

The court’s ruling was made after hearing a case involving a real estate website that published an article critical of alleged unscrupulous practices employed by certain realtors. The comments section, where a site’s visitors can express opinion on the article, published on the real estate website included a number of inflammatory statements targeting the realtors in question.

The realtors named in the article responded by bringing a lawsuit against the website itself, claiming its user-generated comments were libelous and damaging to their companies’ reputation.

The first court to hear the case ruled that the user-generated comments can be seen as “letters from readers” (or letters to the editor) and therefore constitute editorial content, and for this reason the content provider (the website) is responsible for the comments authored by its users.

The first court’s decision was appealed. The second-level court ruled that the comments are not “letters from readers” (or letters to the editor) but instead are personal statements made by commenters.

The second court’s decision was appealed again and wound up being heard by the Kuria, Hungary’s supreme court.  The Kuria ruled that because the site removed the unlawful comments left by its users, all that is left to be determined is whether compensation should be awarded. For compensation to be awarded, fault has to be assigned, regardless of whether or not the comments were deleted.

The case was then moved to the Constitutional Court

The Constitutional Court upheld the lower courts’ rulings that the website itself is responsible for the comments left by its users.

The Constitutional Court’s decision seems to be rooted in the following logic: it is easier to identify website owners and hold them accountable than to punish users hiding behind the veil of internet anonymity.

The Constitutional Court’s 22-page decision makes numerous references to the fact that it would be unrealistic to expect content providers to employ real-time censoring for all comments made on their websites, and that it would also be unrealistic, if not physically impossible, to employ a moderated post-approval system on websites where a large number of users actively comment on content.

The HCLU writes that based on the ruling of the Constitutional Court, content providers are legally responsible for unlawful comments left by users on the content provider’s website even if the content provider had no knowledge of the comments. Furthermore, content providers are even liable for the unlawful comments after they remove the comments following a removal request from whoever the statements had targeted. The HCLU also believes that the Constitutional Court’s ruling will have a chilling effect on the public debate facilitated by the internet, and that it will significantly change the way the public uses the internet to engage in debates.

The HCLU believes that the blanket assigning of liability to content providers exposes them to great risk if they choose to allow the public to engage their content with comments. Content providers are exposed to the same degree of risk whether or not they employ a range of moderation practices. For this reason content providers will be forced to deny their users the right to comment. HCLU says that while the ruling is likely to result in the cessation of unlawful statements, it will also end all other forms of valuable discourse that would have otherwise taken place.

The HCLU says that it allows for commenting on its websites, and while not all user-generated comments provided are positive contributions to valuable debates, the positive comments have often contributed to valuable dialogue, even in cases where the users responded to crass comments made by others.

The HCLU believes that content providers should only be held liable if they fail to remove unlawful statements after being notified by the affected parties seeking that the statements are unlawful.