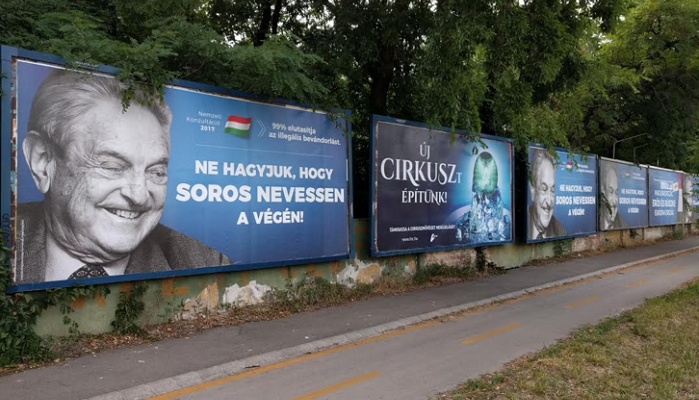 “The National Consultation ended at the end of May. The government planned the post-campaign in two sections and for six weeks. Accordingly, the second section will end July 15 according to original plans,” reported state wire service MTI based on an announcement from the Government Information Center.

According to an influential Fidesz politician quoted by ATV, Prime Minister Viktor Orbán decided it would be better if spectators and participants of the 2017 FINA World Swimming Championships, beginning late this week, weren’t confronted with the widespread signs and billboards.

Orbán reportedly considers the anti-Soros propaganda campaign a “total victory,” not least because he believes it forced extreme-right opposition party Jobbik to make of themselves “supporters of Soros, who wants to let migrants loose into Hungary,” and also because the Israeli Prime Minister Benjamin Netanyahu declared that the campaign was not anti-Semitic.

But Hungarian Jews are not convinced. President of Hungary’s largest Jewish organization Mazsihisz, András Heisler, wrote a strongly-worded request to Orbán that the Soros ads be taken down with immediate effect, arguing that they aroused “bad memories” for Hungary’s Jews.

“These poisonous messages damage all of Hungary. Please, consider my words and do what is necessary to bring this bad dream to an end as soon as possible,” closes Heisler’s letter.

The ads, which suggest the Hungarian-born Jewish-American billionaire Soros is working to import illegal immigrants into Hungary, will come down on the day a new political advertising law goes into effect. The law, passed by legally dubious means by Fidesz in June, prohibits political campaign advertising on billboards outside of campaign season. The law goes into effect July 15, the day the government plans to begin removing the Soros billboards as well as another widespread political campaign organized by Jobbik. Translated, the ads declare: “Let’s not let Soros have the last laugh!”