“We’ve had it up to here with corruption!” “My taxes are not bribes!” “Instead of public work, real workplaces!”  These were some of the messages displayed by some 40 vehicles participating in yesterday’s convoy demonstration in Budapest.  The convoy was intended to give the government a taste of what it can expect on March 1, when “spontaneous road blockades” are expected to spring up along major roads across the country.

Demonstration organizer Zoltán Büki (pictured below) announced before the start of the convoy that the government had “violated every international law and rule over the past few weeks, and even its own constitution,” and had “practically banned the protest planned for March 1.” 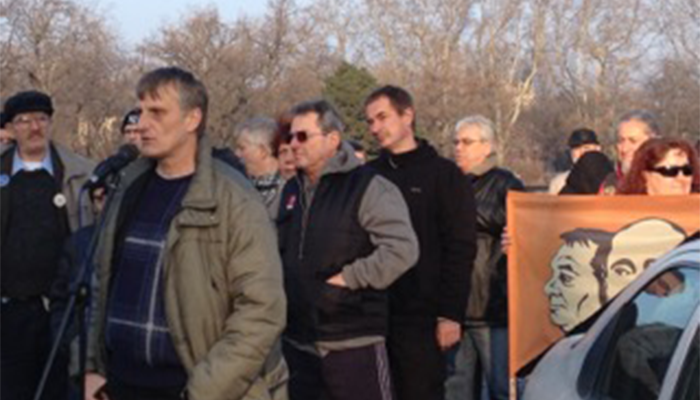 Originally Büki and fellow protesters planned to block roads across Hungary for a period of two weeks, but this will not happen.  According to Büki the new protest plan submitted to the Budapest police provided for partial road blockages to take place eight hours a day over seven days.  The police rejected the plan despite organizers offering to allow public transport vehicles and trucks to pass.  The reason offered by the police was the same as before: the road blockages limit the right of free movement due to the lack of alternative routes.   The organizers have contested the decision in court and expect a judgement to be issued today.

If the court uphelds the police decision, then the protest will not take place officially, said Büki, in which case he expects “spontaneous protests”.  He believes it would have been better for the police if the protest were to take place within an organized framework, but this was not the solution chosen by the police captain. 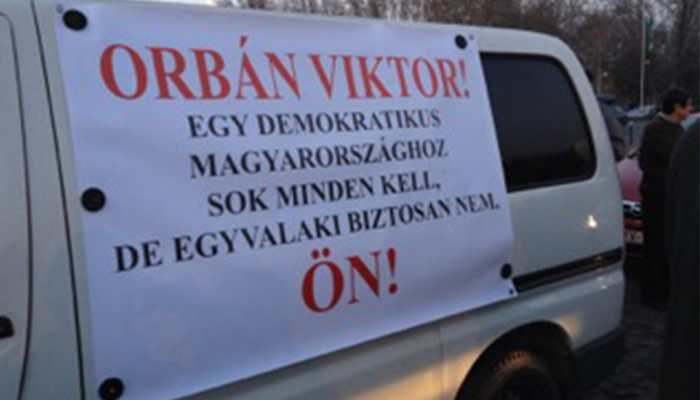 “Viktor Orban! A democratic Hungary needs many things, but for sure there is one person it doesn’t need, you!”

The organisers have three demands. First, that sections of highway that were free to motorists before January 1 this year once again be made free.  Second, that the government account for the HUF 3 trillion of private pension funds appropriated in autumn 2010.  Third, that every contract concluded since 1989 with regard to public assets be made public.

Büki called attention to the fact that he had received a message from under-secretary László  L. Simon that the government is not willing to meet in the presence of the press.  Büki, on the other hand, is not willing to sit down with Simon in private.

Budapest police made it possible for the convoy to travel without having to stop for traffic lights or stop signs by blocking every intersection and pedestrian crossing as the protesters drove past.  The convoy did not cause traffic problems in some places but in others it caused traffic to back up.   Cars, buses, even trams had to wait for the convoy to pass.

While there were some sympathizers among the motorists and pedestrians forced to wait one or two minutes, many showed their displeasure by shouting epithets or making obscene gestures.

Upon returning to the 1956 square, protest participants commiserated with one another, unable to understand “why people can’t stand to wait five minutes, whereas nobody seems bothered by what Fidesz has done over the past five years in the country.”

Among the participants was the head of the Countrywide Assembly Movement (OGYM), Gábor “Tuareg” Szabó.