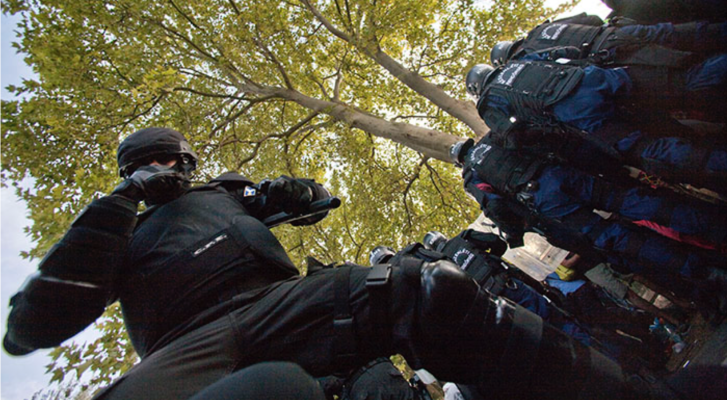 I’m human. Let’s be human here. Let’s stop this. I come from Syria, a war-torn country. Why is everyone acting like this? – Asylum seeker to western journalists moments before they were attacked by Hungarian counter-terrorism police.

Hungarian riot police and counter-terrorism forces clashed with refugees on Wednesday, wounding scores of people, including a number of reporters and photographers, many of them seriously.  Among those injured was Warren Richardson, an Australian free-lance photographer based in Budapest, who blames units from Hungary’s counter-terrorism center (TEK) for ratcheting up the violence.

Richardson arrived to the narrow strip of land between the Hungarian and Serbian border at Röszke shortly after Hungarian riot police overreacted to a few projectiles thrown their way by spraying refugees with pepper spray and dousing them with water cannon. 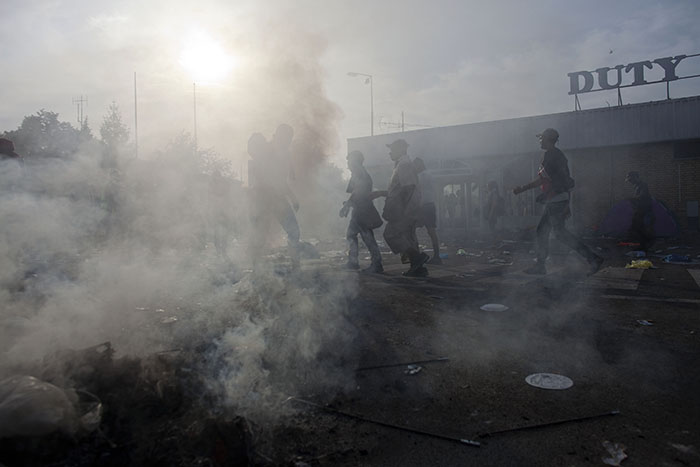 No stranger to war zones, Richardson recounts that when he first arrived there, “it was pretty much smoke and fires from tires set on fire at the border . . . total mayhem.” 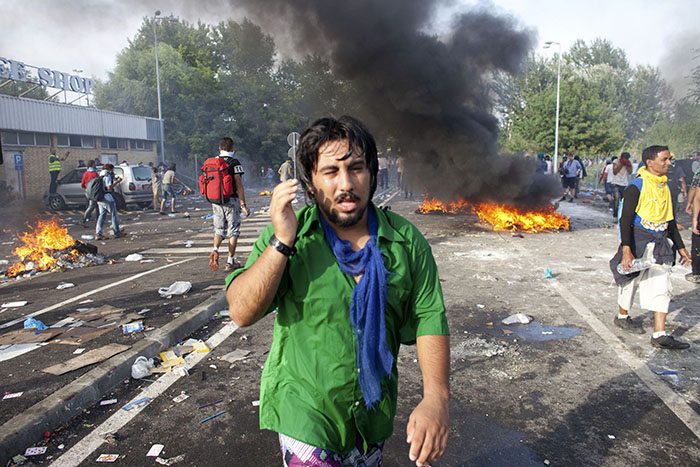 Richardson saw a phalanx of Hungarian riot police standing some 20 or 30 meters from the border crossing gate.  There, on the ground, between them and the gate were hundreds of projectiles, including rocks, sticks and pieces of concrete.  According to a video of the incident, only three of the items were thrown at police before they attacked the crowd with pepper spray and water cannon. 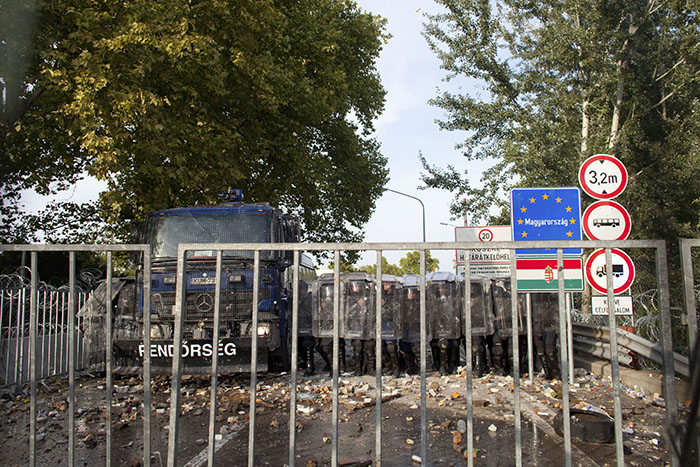 Richardson reports that by the time he arrived to Röszke, tensions had already abated but the refugees suddenly became very agitated.

He reports seeing one man sitting on the shoulders of another with a megaphone telling everyone, “We need to stop this. This is not worth it”.  Richardson says the man was subsequently arrested by members of Hungary’s crack anti-terrorism police. 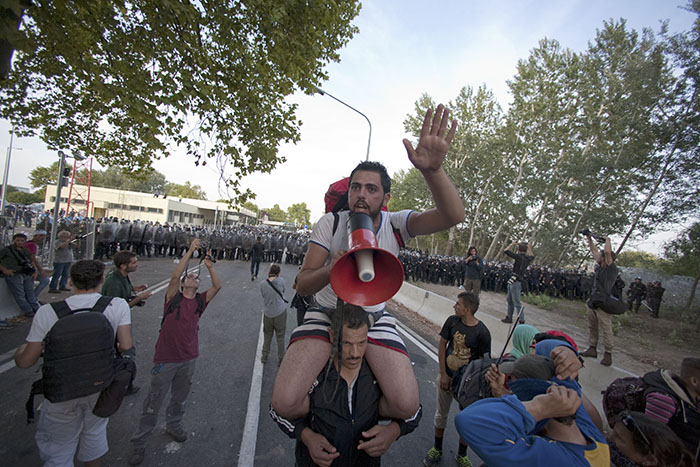 Moving closer to the fence in order to photograph the Hungarian police lined up behind it, Richardson noticed a small group of young men climb over the fence to retrieve projectiles. 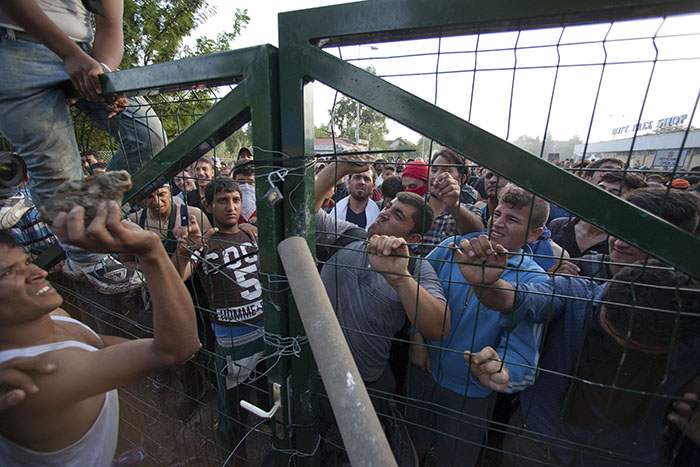 The crowd of refugees, mostly young men, forced the gate open, driving themselves and members of the press directly toward the phalanx of riot police some 20 meters from the border crossing gate. 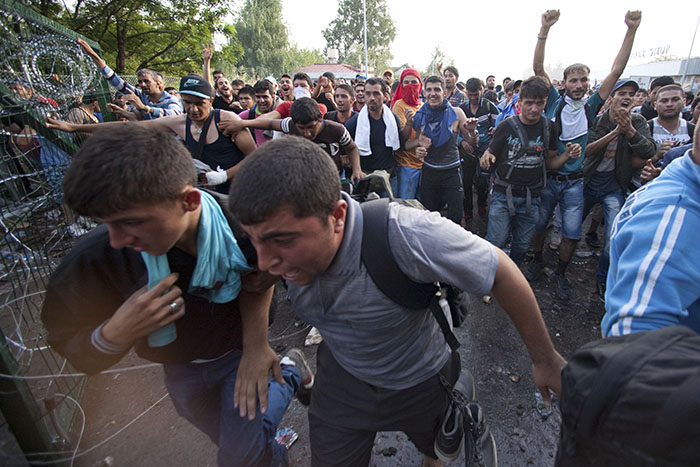 “I watched one Syrian man come out with a child on his shoulder. The child didn’t look too well, so I followed this man all the way up to where the police were standing. He pleaded with the police to take his daughter and give her medical assistance”, claiming there were no medical facilities on the Serbian side.  Richardson says the police allowed the sick girl to pass but did not allow any family members to accompany her. 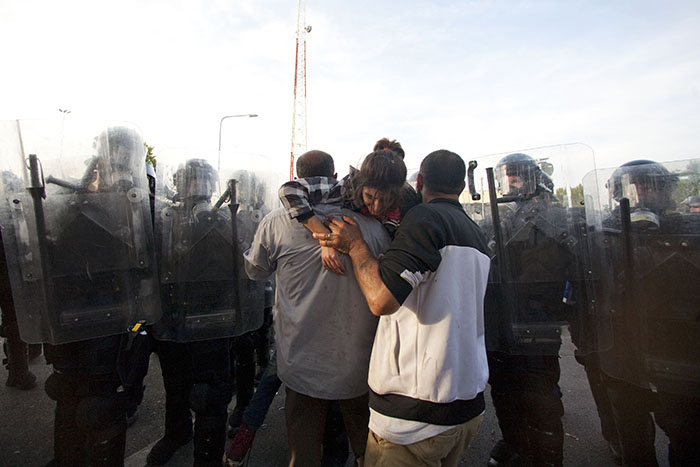 “Once they took her, the barrier – the shields – closed where she had been taken through.” While photographing this, Richardson noticed counter-terrorism units (TEK) taking up position behind the riot police. 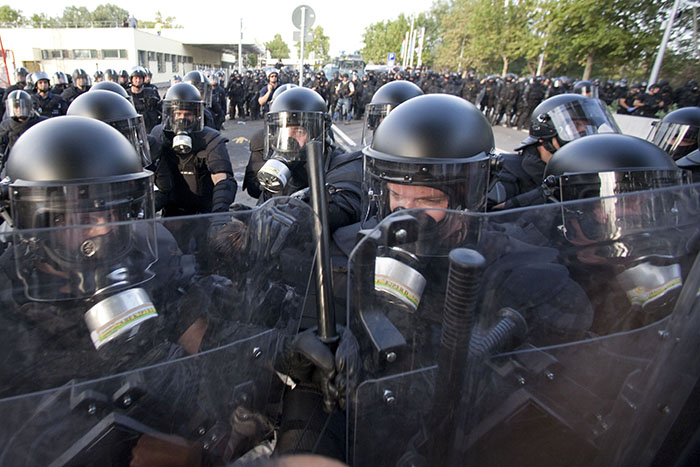 “Once she was through, the man’s family–a woman and three children–came over”.

Richardson observed as the man pleaded with the policemen to allow one member of the family to remain with the girl.

“Just take one of us over there so that my daughter is not over there by herself! I don’t want her panicking,” the father pleaded.

The exchange drew the attention of virtually all members of the press, who proceeded to surround the man and ask him questions.  Richardson recounts the man saying “I’m human. Let’s be human here. Let’s stop this. I come from Syria, a war-torn country.  Why is everyone acting like this?”

“You could hear panic in his voice,” says Richardson. “He spoke English the entire time so everyone could understand, and everyone was photographing away.”

And then all hell broke loose

“I’m on his right-hand side and there were cameras to his left, to his front and to his right. I had my back to the shields, so I’m pretty much right beside the police officers. All of a sudden from behind us you could hear this screaming and yelling.  All of a sudden I saw the TEK uniforms running towards the border. And in a matter of seconds, it just kicked off where we were. Everything just went crazy. The police behind us just start pushing us, pushing us and pushing us. It didn’t stop,” Richardson says.

TEK was using the riot police as a wall, he says.  “The TEK guys were just grabbing people, and what they did was place pressure upon the people, squashing them in” he recounts, noting that the violence was instigated by the counter-terrorism police.

“No one behaved threateningly.  I mean, these were people carrying children,” says the photographer, adding that when the violence broke, it came from the anti-terrorist units that had arrived on the scene. 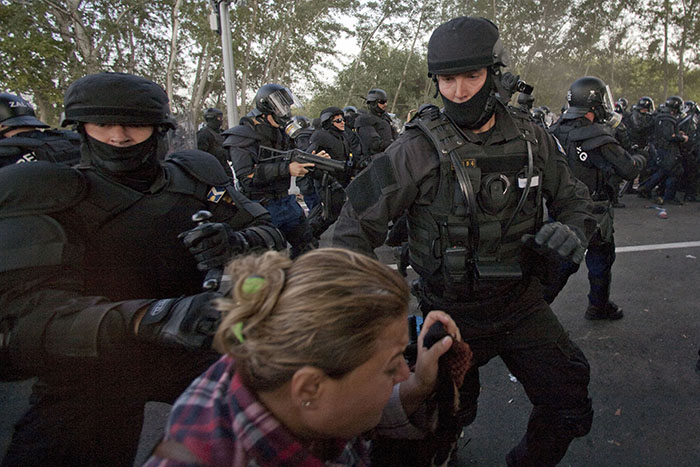 “All I know is that on the left-hand side of my body I could feel pain from the baton that was being shoved into my side by an officer. I couldn’t make out who the officer was straight away.”  After being pushed to the ground, Richardson says he was kicked in the back of the head “numerous times”.  Nevertheless, at one point he managed to turn around and click off a few photographs of a TEK officer about to hit him with a baton.

“When I turned around and told the officer ‘I am no threat to you. I’m a journalist.’ He stopped, looked up and saw his friend. His friend came up behind me and kicked me in the head”. 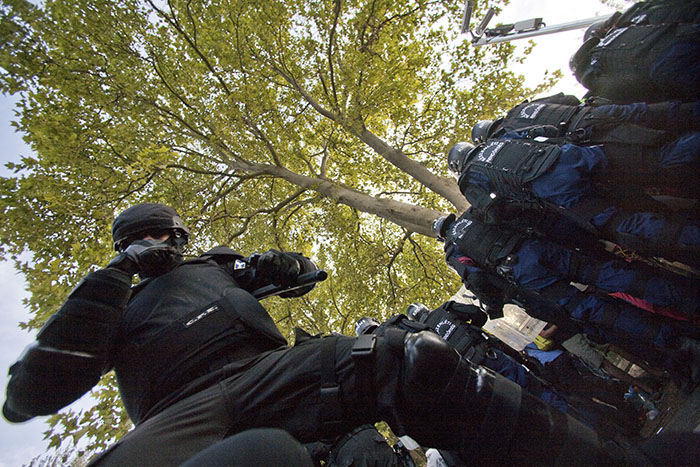 Richardson says the TEK police tried to break his cameras before pulling him back toward the Hungarian side of the border.

“[The police attack] was well-coordinated. When I was dragged into the Hungarian side, I was able to have a good look at what was going on. There was a photographer on the roof of the Hungarian customs office. At the same time I saw a TEK uniform up there on a higher level of that building. I saw another two officers up there as well. What I noticed with the TEK guys is that they were running two-way radio headsets.”

The photographer also noticed numerous people laying on the ground.

“As I approached, I noticed one Syrian man who looked to be in his sixties. He started convulsing and it looked like he was going into cardiac arrest. Immediately, I put my cameras down and started CPR. I was told by a TEK officer to ‘get the f*ck away from him!’”

Richardson says he stayed by the man’s side and tried to help him.

“He was foaming at the mouth and his heartrate was just pumping, and I knew something was incredibly wrong with him. An officer again told me to ‘F*ck off!’” 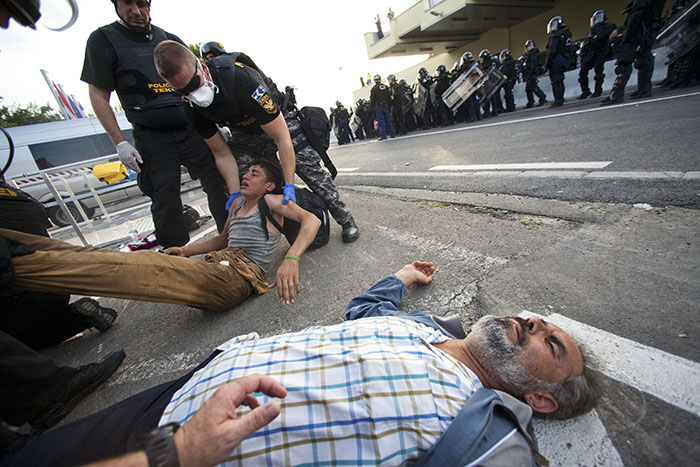 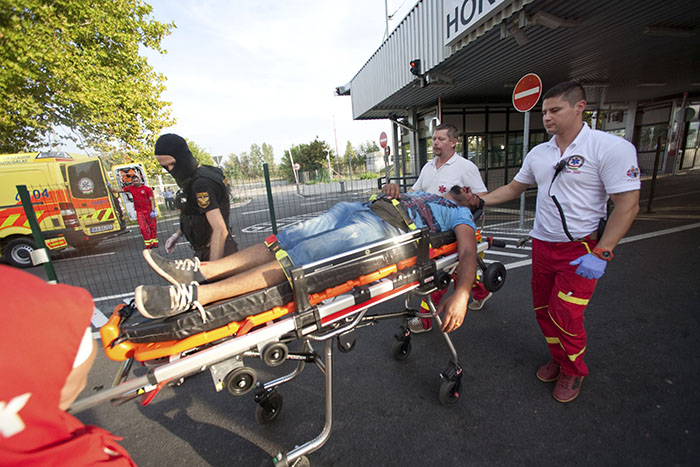 Asylum seekers were not the only ones injured.  Scores of policemen were, and numerous journalists.  Polish anchorman Jacek Tacik “took a massive blow to the back of the head” recounts Richardson, whose camera miraculously managed to survive the ordeal despite most of his equipment being lost or destroyed. 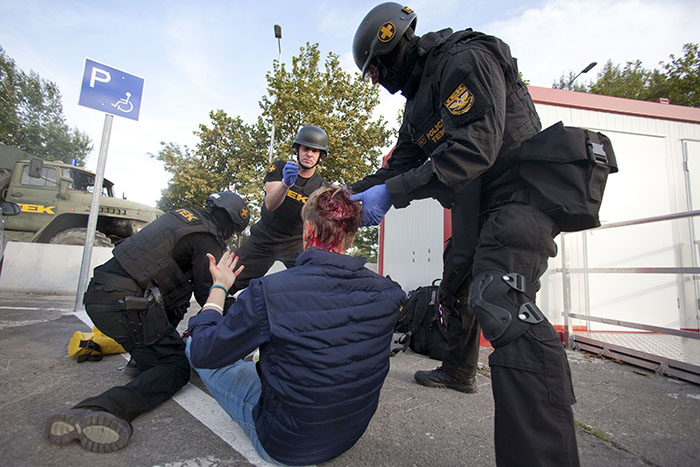 Initially held in a building on the Hungarian side of the border, Richardson says he and two other journalists were subsequently transported against their will to the police station in Szeged, where they were interrogated by a police detective for several hours. 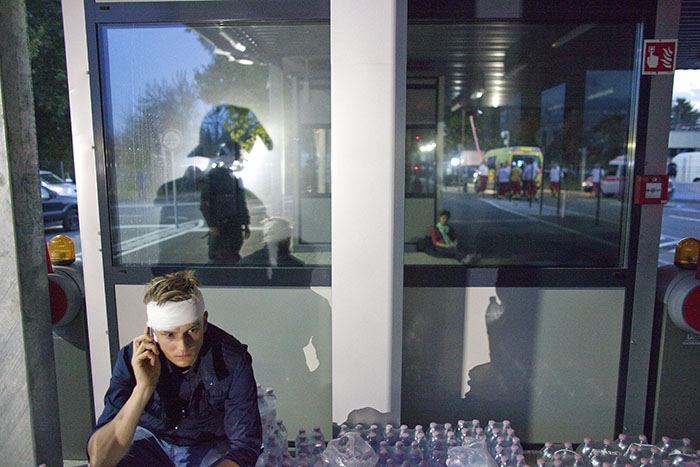 Together with his assigned interpreter, Richardson says he had to insist on several occasions that the detective revise his statement to reflect what he had actually said.

Reflecting on what he experienced last Wednesday, Richardson speculates that the “pacification” of asylum seekers at Röszke was “a trial run for the TEK guys”.

“They went in with a bully boy attitude with the intention of instilling fear in the refugees.  There was easily 1000 people on the border and people in the tree-line.”

Richardson says both sides could have handled the situation differently.  “I understand the refugees’ position and it’s frustrating. They’re looking for stability in their life. They’ve lost their dignity. Their families are living nowhere.  Men have got to try and survive with their families.  So I understand that anger building up.  All they want to do is use Hungary as a transit country to get to where they really want to go, which is Germany.”

At the same time, Richardson says he also understands the position of the Hungarian police.  “At the end of the day, they’ve never been in the position where they have an external problem. They’ve only ever had to deal with internal problems. I think this was a trial run for them, too.”