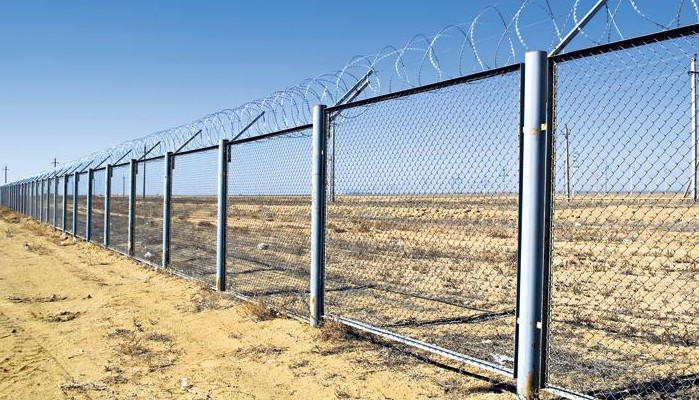 Plans announced by Hungarian Minister for Foreign Affairs and Trade Péter Szijjártó on Wednesday to build a 175-kilometre-long, 4-meter-tall barbed-wire fence along the border with Serbia have been highly criticized both at home and abroad.

Domestic opposition leaders have condemned the decision as an enormous waste of taxpayer money.

At a joint press conference held in front of parliament on Thursday Dialogue for Hungary (PM) spokesperson Richárd Barabás pointed out that the government was proposing to spend tens of billions of forints building a fence even as it reluctantly allocated HUF 1.6 billion to increase the wages of Hungary’s badly underpaid social workers,

The Green Front Youth Movement called on the prime minister to “stop inciting hatred” and “to return to the path of commonsense.”  The movement’s co-chairman pointed out that the notion that Hungary “mindlessly allows everyone in” is deliberately misleading.  He said it was necessary to formulate a European level regulation that would enable those who wish to live here to integrate into society.

DK chairman Ferenc Gyurcsány went on public television to condemn the government of Viktor Orbán for deliberately exploiting the people`s base instincts for the sake of political expediency rather than educating them.

“We are not going to live in Auschwitz”

Serbian Prime Minister Aleksandar Vucic told the Serbia public television he was “surprised and shocked” by the news of Hungary’s plans to build a fence along the Serbia border.  Like his Croatian counterpart, Vucic said Serbia would not follow Hungary’s example. “We are not going to live in Auschwitz.”

He said most of the illegal migrants arrived in Serbia from EU member country Greece via Macedonia.  Bulgaria has already built a 240km fence along its border with Turkey to keep out illegal immigrants.

He said he would seek an explanation from Orbán when the two meet in Budapest at the beginning of July for a planned Hungarian-Serbian summit.

Vucic does not believe that Serbia is responsible for those migrants who use the western Balkans as a transit route to the EU.  They do not want to remain in Serbia.  “We feed them, we watch out for them.  What else can be expected from us?” asked the Serbia prime minister rhetorically.  “They don’t want anything from our country, and somebody is going to build a wall on our border?  I don’t understand the decision, but I believe I will receive a logical answer from my Hungarian colleagues.”

At a joint press conference held in Vienna with his Croatian counterpart, Austrian President Heinz Fischer said the decision was “a step in the wrong direction.”  He said the refugee problem called for coordination and solidarity on the part of EU member states.  “If people`s lives are in danger, we mustn’t abandon them.”  The Austrian president said the refugee problem could not be solved by building fences within Europe and warned that such policies would result in new walls being built between countries.

Croatian President Kolinda Grabar-Kitarovic said Croatia had no such plans to seal its borders with neighboring states, adding that it was in her country’s interest that a comprehensive solution be found to the refugee problem.

On Wednesday the European Commission spokesperson on immigration matters stated that, while border protection is the responsibility of EU member states, and that it is for EU member states to decide what actions are necessary, this must be done with respect for EU and international law and for the human rights of those arriving in the EU. Bertaud stressed the importance of nobody being returned to a country where their life or physical safety is threatened.

The EC spokesperson did not think building fences was the best solution. “Only recently we took down walls in Europe, it is not necessary to build them again,” said Bertaud.

The foreign press is none too pleased with Hungary’s decision to seal its border with Serbia.

Reuter’s said the decision to erect a fence along the border was reminiscent of the Berlin Wall and the Iron Curtain which isolated Hungary from the capitalist countries for 50 years.  The news service believes neither human rights organizations nor the EU will not be happy with the decision to seal the border.

Commenting on Hungary’s plans to return refugees to Serbia, Reuter`s points out that the EU maintains that certain countries, including Greece and Serbia, lack the necessary infrastructure to receive refugees.

The Telegraph accuses the Hungarian government of cynically manipulating public opinion, pointing out that in the middle of the so-called “national consultation on immigration and terrorism” the government wallpapered the country with billboards saying “If you come to Hungary, you cannot take the work of Hungarians!”.

The BBC points out the hypocrisy of Hungary demonizing “economic migrants” when an estimated 300,000 Hungarians have left Hungary since 2010 to take jobs in other EU countries. “How it is possible that the most anti-immigrant EU member state is the one that has inundated our island nation with emigrants?” asks the BBC.