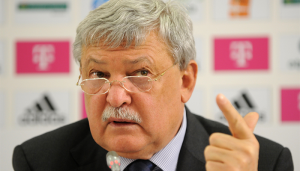 Kocsis had written that Hungary’s defeat was “humiliating, shameful, and pathetic” and that “the sackings should not stop with (national team coach) Egervári”.  Fidesz MEP Deutch called Csanyi’s actions “shameful and humiliating” and openly called for Csanyi’s resignation.

In uncharacteristically striden comments Csanyi stated that as a “Fidesz spokesperson” Mate Kocsis “had so many areas in which to lie that he needn’t stray into this field” and called on Deutch to account for the fate of HUF 4 billion worth of electronic gates purchased during the first Orban administration (1998-2002) which, according to Csanyi, are still “in storage collecting dust.”

In addition to being the president and general secretary of MLSZ, Sandor Csanyi is also CEO of the National Savings Bank and Hungary’s richest person.  This is the second time in as many months that Csanyi has spoken critically of Fidesz.  In September Csanyi characterized the government’s economic policies as “counterproductive”.