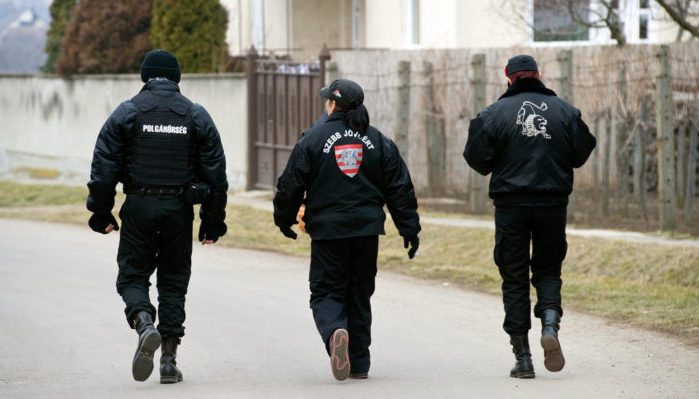 One of the most serious racist episodes to take place in Hungary in recent years occurred in the northern town of Gyöngyöspata where, for some weeks in the Spring of 2011, uniformed members of the so-called Civil Guard Association for a Better Future (Szebb Jövőért Polgárőr Egyesület), the “Protective Force” (Véderő) and the “Army of Highwaymen” (Betyársereg) regularly and systematically “patrolled” the neighborhood where the majority of the settlement’s Roma population resided, supposedly in order to protect the Hungarian majority from “Gypsy crime” (even though statistically Roma were no more likely to commit crimes than their non-Roma neighbors).

The two-week siege culminated in an outbreak of violence on April 26th, when several extremists clashed with members of the local Roma community. It was the threat of such violence that prompted the Hungarian Red Cross to evacuate the women and children for the Easter weekend.

Hungary’s highest court, the Curia, ruled today that the police were guilty of harassing the community’s Roma population by failing to disperse the gendarmes in light of the threat of violence. The court also found that the police were guilty of discrimination by routinely fining members of the Roma community for minor infractions during the siege and in the months that followed, such as walking in the road or riding a bicycle without a bell.

Prior to the arrival of the dreaded Véderő, the police did not disperse the radical right-wing paramilitaries even though their actions were conspicuously racist. The Curia ruled that by failing to do so, the police were guilty of harassing members of the local Roma community, thereby violating their right of equal treatment. The Curia expressly forbade the police from committing such violations in the future.

The Hungarian Civil Liberties Union (TASZ) sued the Heves county police headquarters for allowing three radical right-wing organizations to intimidate the Roma of Gyöngyöspata for two weeks in April 2011. The Curia ruled that the patrolling was clearly racially motivated.

“Apart from the Roma murders, this was the most serious racist action in recent times,” said the presiding judge. “Although the police did not have the right to disperse the assembly, once the possibility of violence arose, it should have dispersed the radical (organizations).”

TASZ lawyer Tivadar Hüttl told the court that in 2011 Hungary should not have been the kind of country where extremist organizations voluntarily visited Roma communities and terrorized them. He believes that the court decision disbanding the Magyar Gárda properly recognized that protecting the public does not justify excluding and intimidating a group based on nationality.

“This was a throwback to one of the darkest periods of history,” he said. “This was not a case of a few well-off individuals losing a few thousand forints, but a situation that adversely impacted the lives of people living in dire poverty” Hüttl told the court.

TASZ petitioned the Curia to review the second-level decision issued in April 2016 by the Debrecen court which found that the Heves county Police Constabulary had not discriminated against the Roma by allowing radical extremists to patrol the Roma neighborhood for two weeks in 2011. In that decision, the court found that the Roma residents of Gyöngyöspata had confused the black uniforms worn by the members of the Szebb Jövőért Polgárőr Egyesület with those of the banned Magyar Gárda, and that it was primarily for this reason they were afraid.

TASZ requested the following from the Curia:

TASZ also sued the police for meting out excessive fines to Roma both during the siege and in the months that followed. Specifically, TASZ asked the court to

The Curia rejected requests for compulsory sensitivity training and the formulation of a strategy, on the grounds that its execution was problematic. Furthermore, the judge argued that it was enough to expect that the defendants
fulfill their obligations arising from the law.