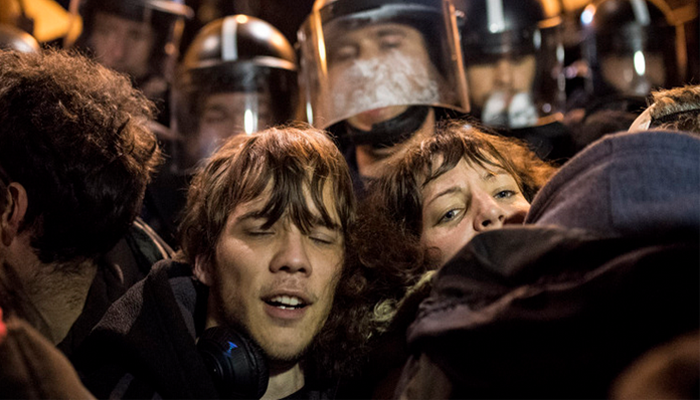 Tens of thousands of Hungarians participated in “Day of Public Outrage” demonstrations across Hungary Monday evening.  In Budapest over ten thousand demonstrators packed parliament’s Kossuth square.  In Szeged some two thousand demonstrators congregated in the Klauzal square in front of the old university library.  In Miskolc over a thousand protesters defied the pouring rain to express their dissatisfaction with the policies of the Hungarian government.  In Pécs, several hundred protesters gathered in the main Szechenyi square to hear civil activists address social issues ranging from the closing of cultural institutions to cut-backs in social spending.  Similar protests took place in cities and towns across the country.

After hearing speeches from protest organizers and prominent civil leaders, the crowd marched to the local headquarters of the National Tax and Duty Authority (NAV) to deliver a petition and to demand the resignation of NAV president Ildikó Vida and three other high-ranking tax authority officials.

The text of the petition is the following:

We are not asking.  We are demanding!

Similar protests were held in London, Bristol and Berlin, where thousands of Hungarians have taken refuge from a lack of decent-paying jobs and poor economic prospects at home.

Most demonstrations lasted one or two hours.  In Budapest, however, instead of marching to NAV’s Dob street headquarters, part of the crowd attempted to climb the steps of parliament.  A phalanx of riot police used their shields to push the crowd back onto the square.  The “push and pull” between protesters and riot police lasted over an hour.  Fortunately, no one was injured.

The Budapest Beacon wishes to thank Hungary’s law enforcement authorities for their professionalism and restraint in the face of an impassioned and occasionally hostile crowd.